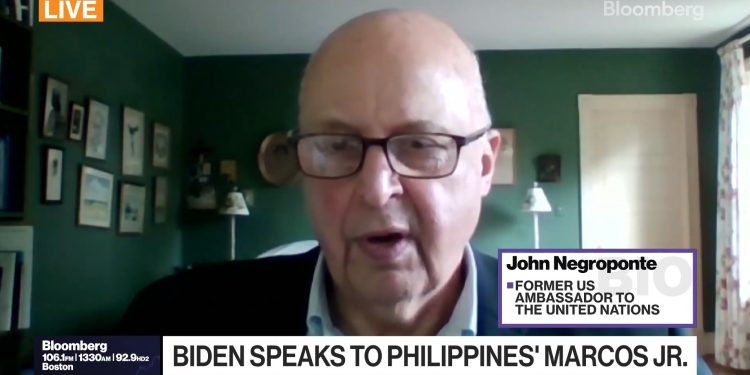 John Negroponte, former US Ambassador to the United Nations and the former director of national intelligence, on "Balance of Power" with David Westin. (Source: Bloomberg)
FacebookTwitterLinkedinMix

Below is a partial transcript of the full interview.

WESTIN: Ambassador I want to wrap this up by turning to another area of your extensive experience expertise and that’s Asia particularly Pacific. You were Ambassador of the United States to Philippines. We now have China entering into a deal with Solomon Islands. We now have a change of regime in the Philippines. What do you make about the strategic consequences potentially of Marcos coming back into power?

NEGROPONTE: Well first of all, he won the election overwhelmingly. He got 60 percent of the vote. So, he is going to have a very strong mandate. He has spoken in the past of a fine line in relationships between the United States and China. But he also said that the Filipinos should be firm and assertive in defending Philippine fishermen against Chinese encroachments. I think we are going to find a good basis for working well with the Philippines. I think we’ve got our strategic relationship with them today in pretty good order as between our respective militaries and our strategic thinking. I think we can look forward to a period of strong cooperation with someone who has won with a rather overwhelming mandate from the Philippine people.