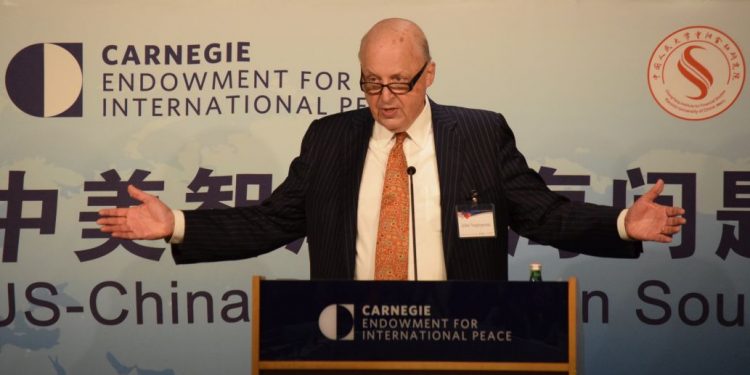 Good Morning:  I would like to thank the conference co-hosts, the Carnegie Endowment for International Peace and the Chongyang Institute for Financial Studies, Renmin University of China.  I also wish to thank The Woodrow Wilson International Center for Scholars and The National Institute for South China Sea Studies of China for their co-sponsorship of this one day meeting.

This meeting is timely, because a five member arbitral tribunal, formed under the terms of the Law of the Sea (LOS) convention is expected to hand down its decisions in regard to various claims by the Republic of Philippines vis-à-vis the PRC on the 12th of this month, just one week from now.

The panels which follow today will discuss this situation in some considerable detail.  So, this morning I want to limit my remarks on this specific subject to saying that the United States considers this a case of compulsory and legally binding dispute resolution provided for under Part XV, Section 2 of the LOS Convention.

Another point I would like to make is that the situation in the South China Sea is not a bilateral dispute between China and the United States.  We are not a claimant state in this situation and a full and complete airing of views would require the presence of spokesman and representatives from the other claimant states as well.

The United States has consistently encouraged all states to peacefully manage and resolve maritime disputes, including through legal dispute mechanisms such as arbitration.  We also continue to encourage China, the Philippines and all claimants in the South China Sea to exercise restraint in dealing with their disputes and to comply with their obligations under their international law.

Finally, as someone who has from time to time been involved in the development and evolution of US-China relations since 1972, I think we should remind ourselves of the breadth and depth of the United States –China relationship.  Our economic relationship has grown by leaps and bounds and we cooperate on a wide range of bilateral, regional and global issues-not the least of which was the historic achievement of the Paris agreement on global climate change-in December of 2015. As the two largest economies in the world, and as principal stakeholders in a multilateral economic and security system, our bilateral relationship can have an important impact on peace and prosperity in the world.