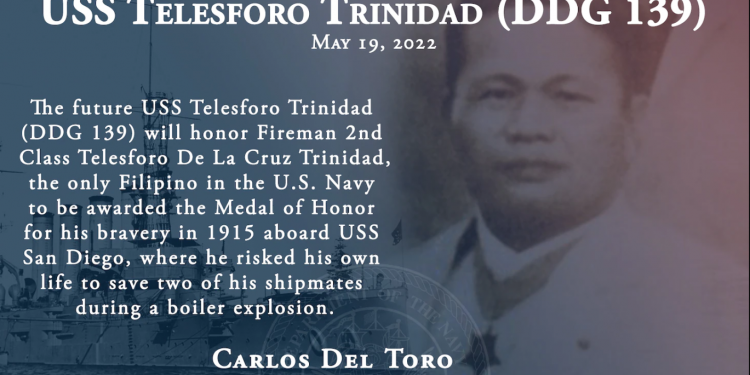 Secretary of the Navy Carlos Del Toro announced May 19, 2022, the naming of a future Arleigh Burke-class guided-missile destroyer as USS Telesforo Trinidad (DDG 139). Telesforo de la Cruz Trinidad, the ship’s namesake, is the only Filipino in the U.S. Navy to be awarded the Medal of Honor for his bravery in 1915 aboard USS San Diego (ACR 6), where he risked his own life to save two of his shipmates during a boiler explosion.

From Secretary of the Navy Public Affairs

The future USS Telesforo Trinidad (DDG 139) will honor Fireman 2nd Class Telesforo De La Cruz Trinidad, the only Filipino in the U.S. Navy to be awarded the Medal of Honor.

Trinidad was born November 25, 1890, in Aklan Province, Panay, Philippine Islands. On January 21, 1915, Petty Officer Trinidad was serving aboard USS San Diego when the captain decided to conduct a four-hour full-speed and endurance trial to determine if the ship could still maintain its officially rated flank speed. Following the trial, an obstructed tube in one of the ship’s boilers gave way, creating a chain reaction. Trinidad re-entered the closed space to the No. 2 boiler to save Fireman 2nd Class R. W. Daly. As he was carrying Daly through the No. 4 fireroom, an explosion of No. 3 boiler hit Trinidad, which burned him in the face. After seeing Daly to safety and despite his injuries, Trinidad then assisted in rescuing another injured shipmate from the No. 3 fireroom. For his bravery, the U.S. Navy awarded him the Medal of Honor.

Arleigh Burke-class destroyers are the backbone of the U.S. Navy’s surface fleet providing protection to America around the globe. These highly capable, multi-mission ships conduct a variety of operations, from peacetime presence to national security, providing a wide range of warfighting capabilities in multi-threat air, surface and subsurface domains. These elements of sea power enable the Navy to defend American prosperity and prevent future conflict abroad.