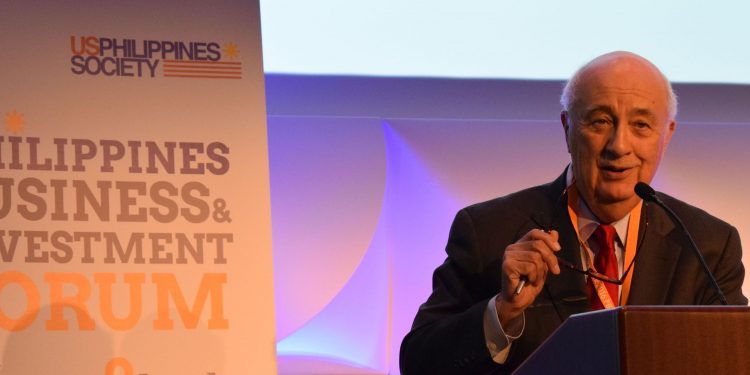 As President of the US-Philippines Society and former diplomat who served in the Philippines, it is a distinct honor to participate in this commemoration on the 75th anniversary of the establishment of diplomatic relations between our two countries.

There are variety of factors that have bound us together over the decades, including shared democratic values, democratic institutions and human rights, people-to-people ties, economic interests and mutually beneficial strategic alignment. But, I would like to take this occasion to salute the hard and successful work by diplomats from both countries that led to the forging of a relationship in 1946 based on ties between sovereign nations, and has been sustained and nourished for the past 75 years.

Those early visionaries included President Quezon, Carlos P. Romulo and Joaquin Elizalde, the first Philippine ambassador to the U.S., whose 56th death anniversary we observe on February 9, 2021. Their work has been so capably followed in our era by Ambassadors Babe Romualdez, Joey Cuisia, and Albert del Rosario, among others.

The American side has been represented by legendary figures, from Paul McNutt and Stephen Bosworth during the People Power transition back to democracy in 1986 to our most recent ambassador, Sung Kim. And, from the US-Philippines Society, we are honored to have Ambassadors John Negroponte, Tom Hubbard, Frank Wisner and Richard Murphy among our leadership.

A historic note: Philippine diplomat Marciano de Borja has written the history of the Philippines’ first diplomats who participated from 1945 to 1947 in a State Department program to help launch the Philippine Foreign Service— another piece of this 75th anniversary.

To those coming up in the ranks of the diplomatic services who will be fortunate enough to work on US-Philippines affairs:  you will build on the rich legacy of professionalism and mutual respect of the past 75 years, and it will be toward an even better future.