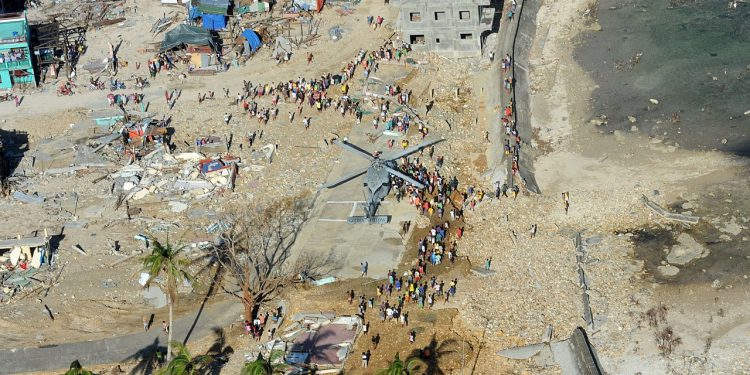 Philippine local residents gather around an MH-60S Seahawk helicopter as it delivers relief supplies during Operation Damayan in Guiuan, Philippines, November 17, 2013 in support of the 3rd Marine Expeditionary Brigade assistance to the Philippine government in the aftermath of Typhoon Haiyan. Photo by U.S. Department of Defense.
FacebookTwitterLinkedinMix

Question 1: With the Philippine government’s recent announcement on suspension of VFA termination and your close personal association with the VFA’s history, in what ways does the agreement continue to serve the interests of both countries in today’s era?

The recent announcement by Foreign Secretary Locsin suspending President Duterte’s earlier decision to abrogate the 1999 Visiting Forces Agreement is a most welcome development that will serve the security interests of both countries at a critical time. The foundation of the US-Philippines Alliance is the Mutual Defense Treaty of 1951. For most of the period since US military bases were closed in 1992 the VFA has been the procedural vehicle that makes our military cooperation operational.

The VFA has a special place in my own heart because it was negotiated during my tenure as Ambassador. It filled an urgent need. When the Military Bases Agreement that had provided for the permanent presence of US forces in the Philippines was rejected by the Philippines Senate in 1992 we were still security allies with mutual defense obligations, but no longer had procedural arrangements allowing the military-to-military cooperation needed to fulfill those obligations. The VFA was designed to fill that gap by providing procedures governing the entry and legal status of US forces in the Philippines for temporary duty in fulfillment of the MDT. I personally proposed the name Visiting Forces Agreement to underscore the fact that we were not seeking permanent bases but, rather expected US personnel to enter the Philippines only on temporary visits, using Philippine facilities.

There should be little doubt that the VFA has served our mutual interest during a time of dramatic change in the Asia-Pacific region. Our strategic presence has been valuable to both countries. Under the VFA, the US has provided valued training for Philippines Forces, assisted them in combating ISIS-influenced terrorism in Mindanao and helped track Chinese activities in the South China Sea. US Forces in turn have benefited from ship visits and other exchange opportunities. In 2014 we reached a new agreement, the Enhanced Defense Cooperation Agreement, that provides more regular American use of designated Philippine military facilities on a rotational basis. And finally there is a new possibility for the US Navy to repair ships in a newly planned private shipbuilding facility at Subic Bay. All of this would have been in question if the VFA were abrogated.

President Duterte’s decision to forgo VFA abrogation, while couched in temporary terms, no doubt reflects a sound judgment that now is not a good time for the Philippines to weaken its alliance with the US. We need to stand together against COVID-19 and our challenges in a turbulent region.

Question 2: Even though VFA appears likely to remain in force, the intent to terminate last February suggests the Philippine side may harbor some underlying reservations. As a former ambassador, do you have any advice for the USG going forward on engaging the Philippine government to modernize and strengthen the VFA?

The viability of the US-Philippines alliance depends fundamentally on mutual respect and a sense of common interest and purpose. We have experienced 120 years of common history and met many challenges together, but in some respects our common history still divides us as much as it brings us together. Our military relationship still carries a lot baggage for many Filipinos and perceptions that US military personnel are somehow “above the law” are particularly painful in the Philippines because of our colonial past.

That said, procedural arrangements like the VFA are essential and not unique to the Philippines. We have agreements similar to the VFA with virtually all of our treaty allies and the concept of US responsibility for acts committed by US personnel on duty is central to all of them. Beyond that key point, however, the agreements differ somewhat on how they deal with off-duty crimes and custody, and they are reviewed from time to time by mutual consent. As a US diplomat, I personally participated in such reviews involving Japan and Korea.

It is my profound hope that the temporary pause in abrogation of the VFA will lead to an ongoing arrangement that allows the military cooperation that serves our common interests as treaty allies. The VFA is now 20 years old, and it may be time for a review. Drawing on our experience with the VFA, and based on mutual respect, we ought to be able to make improvements that will enhance effectiveness and public support.

Ambassador Thomas C. Hubbard is former U.S. Ambassador to the Philippines (1996–2000) and South Korea (2001–04). He is a Founding Director of the US-Philippines Society. Earlier in his nearly forty-year foreign service career, he served seven years in Japan and was Deputy Chief of Mission and acting Ambassador in Malaysia. He held key Washington postings, including Philippines Desk Officer, Country Director for Japan, and Principal Deputy Assistant Secretary for East Asian and Pacific affairs.