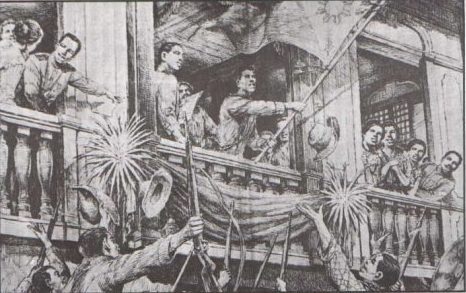 Question 1: From the perspective of a historian, what are some lesser known aspects of the Philippines’ Declaration of Independence on June 12, 1898?

Filipinos know a great deal about that momentous day. General Aguinaldo had recently returned from exile in Hong Kong to restart the revolution against Spain. There was great enthusiasm upon his return, and even more celebration on June 12 when, in his home town of Kawit, Cavite, the new national flag was displayed, the new national anthem was played and the Filipinos became the first Asian colony to declare their independence.

What few Filipinos and Americans today know about is the dangerous international environment of the time or the Filipinos’ diplomatic strategy – of which the Declaration of Independence was one part.

Question 2: What do you mean by “the dangerous international environment?”

This was the height of the “Age of Imperialism.”  Major world powers took pride in building colonial empires. By 1898 much of Asia was under the control of the British, the French and, most recently, the Japanese.

Shortly after Admiral Dewey defeated the Spanish fleet in May 1898, German, British, French and Japanese warships showed up in Manila Bay, looking for possible opportunities to extend their empires.

The Philippines – the Pearl of the Orient – was a most attractive target. What might happen if the Spanish were driven out? Could some or all of those rich islands become available? There were many intriguing possibilities – and many interested parties.

Germany, now united and seeking to enhance its position on the world stage, was particularly interested – and aggressive. A strong German fleet had been sent to Asia to seek opportunities. In Manila Bay Admiral Von Diederichs landed German Marines on Bataan and opened direct communication with the Spanish in Manila, in violation of then-current rules of neutrality. When ordered to cease and desist by Dewey, Von Diederichs refused, setting up a possible conflict between German and US fleets in Manila Bay. Fighting was averted when the British commander intervened, placing his ships between the Germans and the Americans.  Von Diederichs may have been willing to risk conflict between Germany and the upstart USA, but he could not be the cause of a war with the UK.

Von Diederichs also sent one of his warships to Cebu to try to negotiate a separate treaty between Germany and Filipino leaders in the central Visayan islands. Both Germany and Britain had earlier made treaties with the Sultan of Sulu, in the Muslim south of the archipelago.

Question 3: What was the Filipino revolutionary leaders’ response to these dangers?

The Filipinos were following international events closely and their strategy was – Cuba. The situation in Cuba paralleled that in the Philippines – rebels seeking freedom from oppressive Spanish overlords. By the late 1890s it was clear that Americans had great sympathy for the Cuban rebels and seemed likely to assist them in throwing out the Spanish and recognizing Cuban independence – with the all-important guarantee of protection against outside forces. Could the Filipinos manage a similar outcome?

Their first official approach to the Americans came in January, 1897, while the Katipunan revolt was still in progress, 11 months before the Pact of Biac-na-Bato and Aguinaldo’s exile in December of 1897. Filipino leaders in Hong Kong (Jose M. Basa, Doroteo Cortes and A.G. Medina) sent a letter to the US Consul General in Hong Kong imploring the US “to extend its protection over the Filipinos who are now suffering under the tyranny of Spain.”

Cuba was prominent in their petition, praying “that help be extended to the Filipinos to expel the Spanish by force, just as the Emperor Napoleon [sic Louis XVI] helped America in the war of separation from England, by whose aid the Americans attained independence, like assistance to be given to the Cubans who are now fighting for independence – which protection and support the Filipinos now hope and pray may be granted to them, because they are in precisely the same position as the Cubans with their land drenched in blood.”

In November of 1897 the US Consul in Hong Kong reported a discussion with Felipe Agoncillo, a representative “of the new republic of the Philippines,” requesting American assistance against Spain, especially the transport of arms and for a treaty with the US.

The Cuba strategy was at the center of all these conversations. Consul Pratt in Singapore reported that Aguinaldo “declared his ability to establish a proper and responsible government on liberal principles and would be willing to accept the same terms for the country as the United States intend giving to Cuba.”

Aguinaldo kept pressing for an American commitment to the Cuban model for the Filipinos, an assurance which neither the consuls nor Dewey were in a position to give because the McKinley administration had no Philippine policy yet, beyond “defeat the Spanish.”

Dewey personally was supportive, declaring that he knew both Cubans and Filipinos and that, in his opinion, the Filipinos were more capable of self-government. Dewey’s support was amply demonstrated. Two of Aguinaldo’s associates, Jose Alejandrino and Andres de Garchitorena, sailed with Dewey when his fleet left to fight the Spanish in Manila Bay. Aguinaldo was then brought back to the Philippines aboard the USS McCulloch, was welcomed personally by Dewey and spent his first night as Dewey’s guest aboard the flagship Olympia.

The Americans transported some 2,000 Remington rifles and 200,000 rounds of ammunition from Hong Kong to Manila for Aguinaldo’s rebel forces, and turned over all weapons seized from surrendering Spanish forces in Cavite and Corregidor, as well as 8 Spanish steam launches – the first vessels of a new Philippine navy.

Dewey encouraged Aguinaldo to display the Filipino flag on these launches and saluted the Filipinos according to proper naval etiquette, drawing protests from the German and British commanders. When asked why he permitted the Filipinos to use a flag unrecognized by their vessels, Dewey answered that the Filipinos used the flag with his knowledge and consent; and moreover, “that by their courage and firmness in the war against the Spaniards they were worthy of using that right.”

Aguinaldo used one of these launches to travel to Subic to attack the Spanish there, only to be confronted and threatened in Subic Bay by the German cruiser Irene on behalf of the Spaniards – yet another display of German aggressiveness. Aguinaldo had no choice but to return to Manila and report to Dewey, who sent two US cruisers to Subic to order the Irene out and to assist in forcing the surrender of the Spanish garrison.

It is in the context of this Filipino diplomatic strategy that the June 12 Declaration of Independence appears. Seeking official American recognition of the Declaration, General Aguinaldo reported that “I sent a committee to the Admiral to apprise him of it, inviting him at the same time to take part in the ceremonies, which took place with due formality.” Dewey asked that his absence be excused, and neither he nor any of his officers attended. (It should be noted that by June 12 American officials had been instructed to take no action which could be interpreted as a statement of future American policy – which by then was under intense deliberation in Washington.)

Question 4: But wasn’t there an American present at the celebrations on June 12?

There was – a mysterious Colonel L. M. Johnson. It was important to Aguinaldo that some American should be there whom the assembled people would consider a representative of the United States. Colonel Johnson, in US Army uniform, signed the Declaration of Independence and was presented as Aguinaldo’s chief of artillery, but his name does not appear thereafter in any of Aguinaldo’s extensive papers, nor in US Army records.

Question 5: Filipinos have criticized Aguinaldo for praising the United States in the Declaration of Independence. Your thoughts?

It is important to recall the context. Aguinaldo’s primary goal, once he had gained American support for the fight against Spain, was to achieve international – but especially American – recognition of Philippine independence and, equally essential given the dangerous environment, American protection against interference by outside powers.
Aguinaldo repeatedly made similar statements in speeches and in his writings, in the hope that Americans could be persuaded to treat the Philippines like Cuba.

Question 6: Why the difference? Why didn’t the US offer the Philippines what it gave Cuba?

As noted earlier, at the outbreak of war McKinley had no policy toward the Philippines – and had a well-deserved reputation for indecision. Even after peace talks with Spain began in Paris, he changed his instructions to the American negotiators at least four times. His opening position was just a long-term treaty for use of Subic Bay as a naval base – in the same way he asked the Cubans for Guantanamo Bay. The Filipino representatives quickly agreed, and in addition asked for a treaty with the US similar to the one that the Cubans were getting – meaning protection from the imperial powers lurking around their embryonic Philippine republic.

The Filipinos – up to this point allied with the United States against Spain – refused to give up their struggle for independence against the Spanish only to end up under a different colonizer. The inevitable and regrettable result was the Filipino-American War.

As we look back, the truly unfortunate aspect of this history is that the Filipinos, despite a successful revolt against the Spanish, and despite declaring their independence on June 12, 1898, were doomed to lose their independence to the geopolitical forces at play during this high age of imperialism. A newly-independent Philippines would have been too weak, too rich – and too tempting. The Pearl of the Orient was going to be a victim – again.

Question 7: Who do you think might have taken the Philippines if the Americans had sailed away after defeating Spain?

My guess is Britain. It was the strongest imperial power in Asia and strategically could not allow anyone – but especially its main European rival Germany – to cut off lines of communication between British colonies in Malaya/Singapore/Hong Kong and Australia/New Zealand.

No historical evidence has surfaced yet, but it is plausible that Britain approached the dithering McKinley and said, in effect, “if you don’t, we will, so the Germans can’t.”

Question 8: If the Philippines was likely to be a victim of imperial powers, were features of American colonialism different?

First, let me be perfectly clear that I do not defend colonialism. As a scholar, however, it is important to distinguish among the various forms of colonialism. American colonialism was unique. I call it imperialism with a guilty conscience.

Many prominent Americans opposed taking the Philippines as a colony, seeing it as a betrayal of America’s own history of revolution against a colonial ruler. The Treaty of Paris, for example, was hotly debated and approved by a margin of just one vote.

From the beginning the US publicly proclaimed that it intended to prepare the Philippines for independence – a policy Queen Victoria denounced as utter nonsense for a colonial power. Even before the war was over American teachers arrived to create a free public education system. Local and provincial elections were held in 1904, in 1906 elections were held for the lower house of congress (the Philippine Assembly) and by 1916 both houses of congress were Filipino.

In other words, less than 20 years after June 12, 1898 the great majority of Philippine domestic policy was being decided by elected Filipinos and carried out by Filipino administrators.

Would that have satisfied those assembled in Kawit to celebrate the Declaration of Independence? No. Would the rapid transition to Filipino hands have happened under any other colonial power? Also No.

Dr. Frank Jenista grew up in the Philippines as the son of missionary parents and earned his Ph.D. in Philippine History from the University of Michigan. During his 25-year career as a US diplomat, Dr. Jenista twice served “back home” at the US Embassy in Manila.