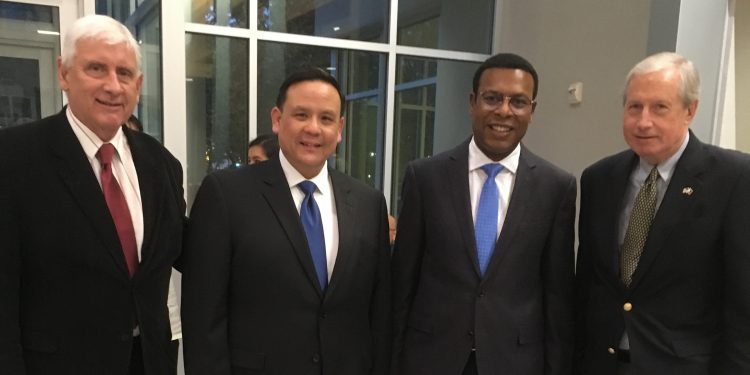 Seventy-five years ago on October 20, 1944, allied forces returned to the Philippines as part of the largest naval engagement of WWII. The landing on Leyte’s Red Beach featured the iconic image of General Douglas MacArthur wading ashore with Philippine President Sergio Osmeña, Carlos P. Romulo and members of the SWPA staff, fulfilling the pledge of “I Shall Return.”

“It took me only 30 or 40 long strides to reach dry land but that was one of the most meaningful walks I ever took,” Gen MacArthur wrote.

A few days later the Philippine Commonwealth government was reestablished on Philippine soil in a ceremony at Tacloban, Leyte.

“On behalf of my government,” said Gen MacArthur at the ceremony, “I restore to you a constitutional administration by countrymen of your confidence and choice. As our forces advance, I shall in like manner restore the other Philippine cities and provinces throughout the entire land.”

The 75th commemorative program began with a garden dedication at the MacArthur Memorial Visitor Center, Norfolk, where General of the Army Douglas MacArthur was laid to rest in The Rotunda in 1964.

Christopher Kolakowski, Director of the MacArthur Memorial, stated that “the promises kept by the United States during that time continue to influence geopolitics to this day and strengthen bonds between the U.S. and the Philippines.”

In his remarks, Executive Director Hank Hendrickson traced the beginnings of the U.S. commitment to Philippine independence “at a time when the world’s imperial powers were wedded more than ever to colonial empires.”  The Jones Act of 1916, passed by the U.S. Congress, paved the way for the process of self-governance. It was the “right thing to do” which netted cooperation and friendship years later during WWII at a time of testing. Hendrickson added that “Filipinos were unique among Southeast Asian countries in organizing themselves and carrying out the fight against Japanese Imperial forces.”

Dr. Rodrigo Romulo, Carlos P. Romulo’s grandson, provided photos and excerpts from CPR’s writings from the period along with a presentation describing the sacrifices by Filipino and American forces that provided critical reconnaissance and support operations in advance of the Leyte Landing.

In Washington DC, the US-Philippines Society joined the Philippine Embassy, and the Rita M. Cacas Foundation in an October 22, 2019 joint celebration marking the 75th anniversary of MacArthur’s Landing and the Filipino American History and Archives Month in October.

Consul General Renato Pedro Villa welcomed a gathering of veterans, historians, press, and members of the Metro DC Fil-Am community in his opening remarks stating that the occasion serves to “remind us of our shared responsibility to ensure that Philippines-US relations will continue to endure and prosper in the years to come.” A panel discussion with Philippine perspective followed. 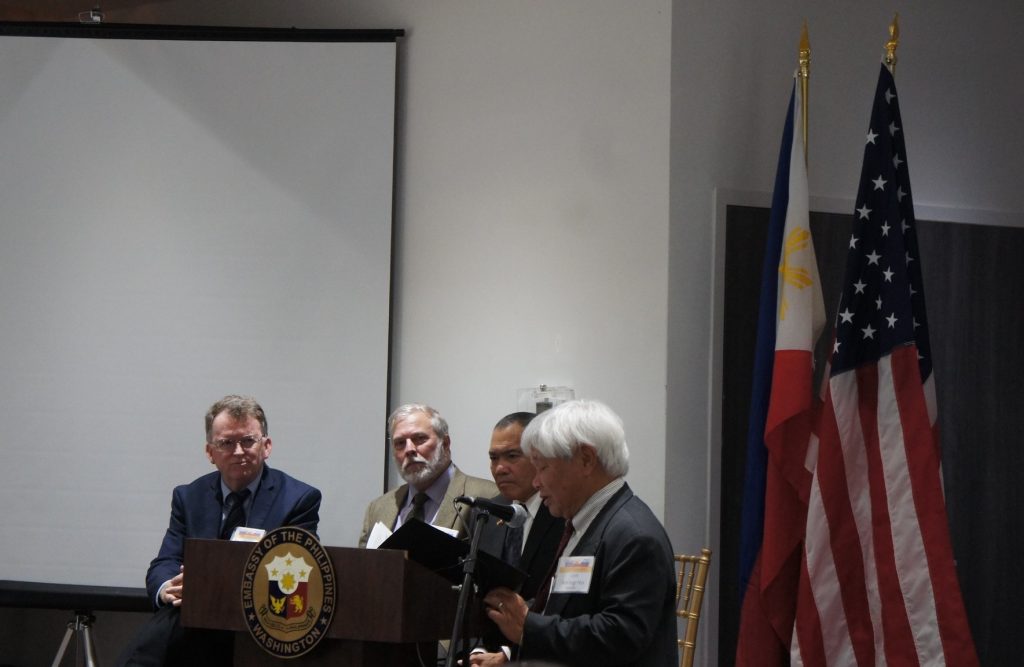 In the Philippines, NPR’s Julie McCarthy gave a first-hand account of the October 20, 2019 ceremony held in Leyte attended by Chargé d’Affaires John C. Law, U.S. Coast Guard Admiral Karl Schultz, and other international dignitaries, along with top Philippine government officials and Filipino veterans, including 91-year-old Ramon Modina. Confetti rained down from a helicopter and a choir sang Irving Berlin’s “Heaven Watch the Philippines.”

A day earlier, a new Visitor Center was opened at the Manila American Cemetery and Memorial where more than 17,000 Americans and Filipino Scouts who died during WWII are buried, along with the names of some 36,000 Missing in Action from the Pacific War.

Brig Gen Vicente Lim, one of Philippines’ greatest soldiers, is honored on the Tablet of the Missing wall in the cemetery. He was the first Filipino to graduate from the US Military Academy at West Point and was an officer of the Philippine Scouts. He led the 41st Division that stood firm against enemy attacks in the Battle for Bataan in 1942. He was a leader in the Filipino resistance and subsequently was executed in 1944.

American Battle Monuments Commission (ABMC) Commissioner Robert Wefald summarized the goal of the visitor center, “that time shall not dim the glory of their deeds because the very character of a nation can be measured by how it cares for and remembers its war dead.”

USN Captain (ret) Brian Buzzell participated in the visitor center dedication, where he was recognized as the US-Philippines Society’s representative. Capt. Buzzell also represented the Society at the October 20 commemoration at Palo, Leyte. 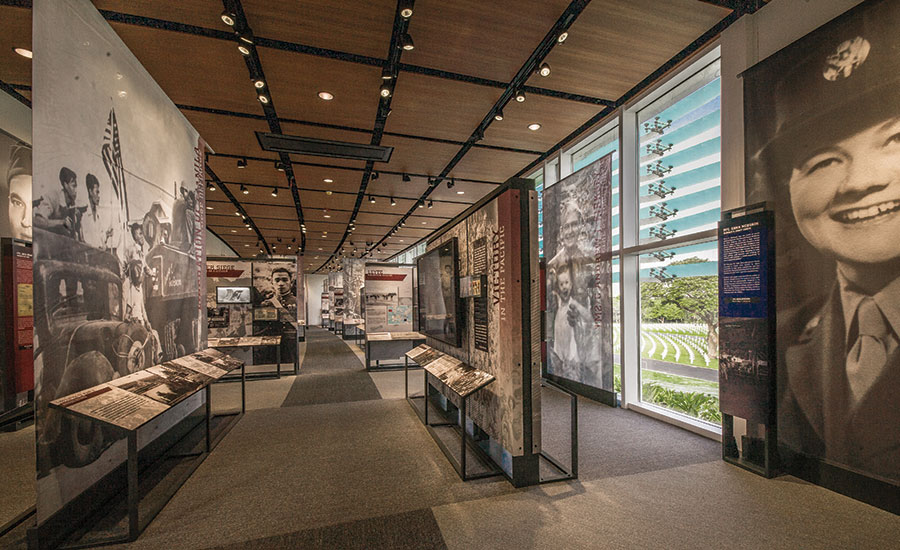 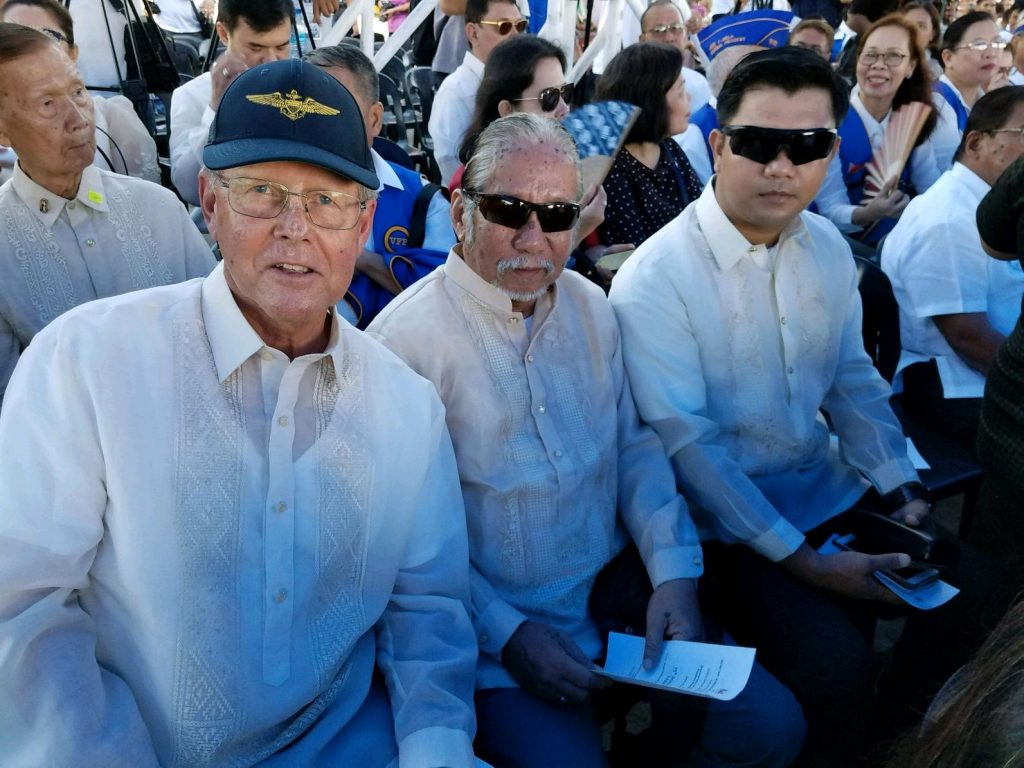 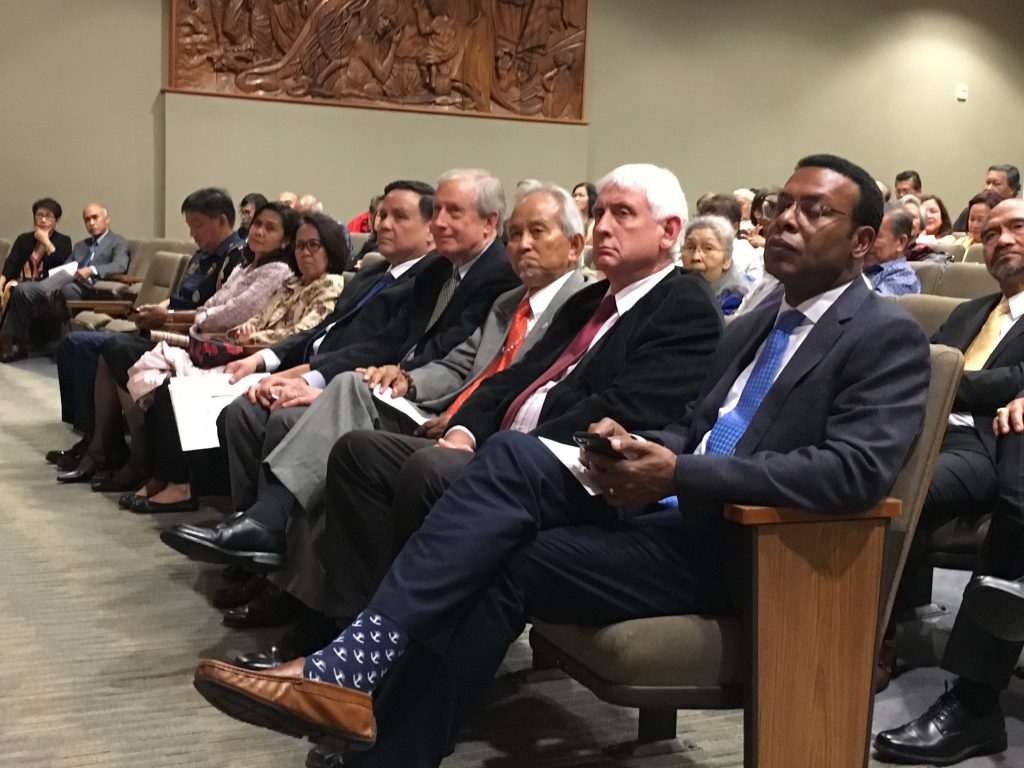