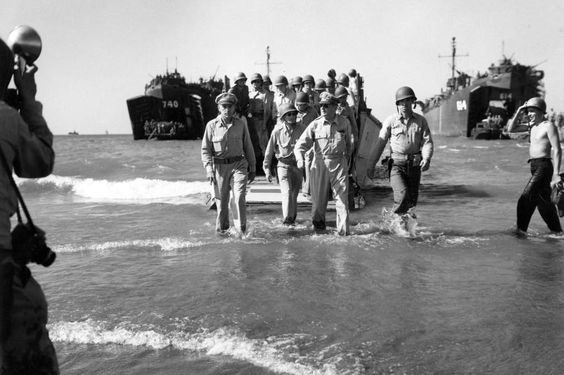 At the landing on Luzon on January 9, 1945, General Douglas MacArthur decided that wading was the right thing to do.
FacebookTwitterLinkedinMix 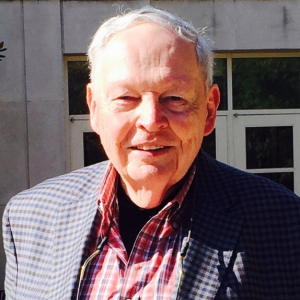 Question 1: As Americans and Filipinos look back on World War II in the Pacific during this 75th anniversary commemoration, the work of war correspondents and photographers provides a uniquely valuable insight. Tell us about AP reporter Spencer Davis, your connection, and his role in reporting on events in the Philippines in 1944-45, and beyond.

Spencer Davis was my wife’s uncle. He was a reporter and journalist all of his professional life, spending almost 40 years with the Associated Press (AP). He was the AP’s lead correspondent assigned to accompany General MacArthur through the Philippines and on to Tokyo Bay. On September 2nd 1945 he joined a colleague, Murlin Spencer (who had followed Admiral Nimitz across the Pacific), on a joint byline in filing the final AP report of the war.

A 1932 graduate of Stanford University, Spence first worked for the Los Angeles Record and then for two years with the Honolulu Advertiser. With the International Press Service in San Francisco, he was on night duty December 7th 1941. He received a phone call from Hawaii. The Japanese had attacked Pearl Harbor. On the wire service keyboard, he filed a first “flash” report of World War II. This is how he picked up the nickname, “Flash” Davis. 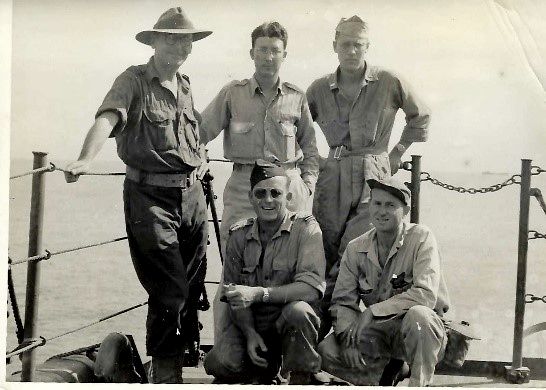 Spence soon joined the Associated Press and was a member of a group of five AP reporters to head west in 1943 to cover the fighting as war correspondents. Only two came home. President Roosevelt had approved two major lines of assault in the Pacific War, one across the Pacific direct to Japan, and one moving from Australia to the Philippine archipelago and north. Some may think of them as a Navy war and an Army war, when in truth it was a team war. Spence was assigned to cover the MacArthur group. War correspondents were civilians although they wore uniforms and had a war correspondent shoulder patch.

Spencer Davis covered 17 landings and was with the campaigns on Guadalcanal, Bougainville, Truk, Hollandia, New Guinea, the Solomons and through the Philippines from Leyte to Manila. Traveling by air he made 48 sorties. During the Battle of Leyte Gulf prior to MacArthur’s landing 20 October, he was on Admiral Kincaid’s flagship. “The battle of the Philippines was decided at Leyte,” he subsequently reported. In preparing for the signing of the final surrender, he accompanied the 11th Airborne that had been assigned to secure the Tokyo area; two of the aircraft crashed and all 31 Nisei interpreters killed. 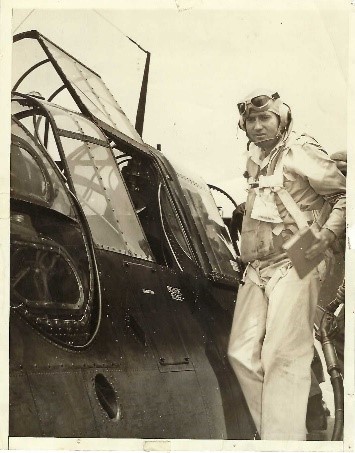 Following the surrender ceremony, Spence was sent to Peking to establish an AP office and cover China and Manchuria. He was an observer to the surrender of the Japanese high command there.  He became news himself as an early product of the beginning of the Cold War when taken by what were supposed to be Russian allies, and placed under house arrest in Mukden and Changchun. The Russians had begun to plunder the industry of our Chinese Nationalist allies. They did not like American reporters.

The Chinese Nationalist Government pass allowing Davis to travel. The Russians were not impressed.

Question 2: Explain why Spencer Davis came to have a long association with the Philippines after the war.

After establishing the AP office in China, Spencer Davis was directed to return to Manila to become the AP’s Acting Chief. He was there for four months as the Philippine people labored to recover from the ravages of war before he was transferred to Shanghai and then home. In November 1946, he returned to Manila with his wife and two children to become AP’s Southeast Asia Bureau Chief. He was there to watch a city rebuild from a destruction that was second only to Warsaw. Once again, it should be called, “The Pearl of the Orient.” 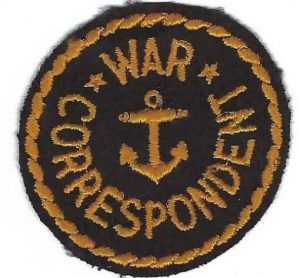 War correspondents were civilians and wore uniforms with a patch on the left upper shoulder sleeve.

Spence became a friend of the Philippines and its leaders. He knew the countryside from the march through the islands to Manila with MacArthur. A November 1944  article “Behind the Lines on Leyte” gained notoriety as a “hair raiser.”

In the summer of 1947, Spencer Davis was with his friends, Napoleon Valeriano and Ed Lansdale reporting the capture of several “Huks,” World War II guerrillas that after the war became a communist movement. A copy of the photo of the three men with captured Huks appears in Max Boot’s 2018 book, “The Road not Taken.” The biography is of the remarkable life of Colonel Edward Lansdale, from his time as an intelligence operative in the Philippines through the unique role he played in early Vietnamese anti-communist history. Lansdale believed in what is studied today as “hearts and minds” warfare, and his friendship and cooperation with Ramon Magsaysay helped Magsaysay succeed as a national populist leader who was elected president in 1953. The Philippine anti-communist leader, Napoleon Valeriano, led the hunter-killer counter guerrilla special unit, the “Nenita”, whose mission was to eliminate the Huks, and in 1950 as a Colonel, assumed command of the elite 7th Battalion Combat Team. Both Lansdale and Valeriano lived out their lives in the Washington, D.C. area. Before my wife and I departed on assignment to the Philippines in 1980, we had the opportunity to meet them and discuss Philippine history as dinner guests of the Davises.

General Douglas MacArthur and staff, accompanied by Philippine president Sergio Osmeña (left), land at Red Beach, Leyte, 20 October 1944. The General was not pleased to have to wade ashore until he saw how dramatic the picture was. 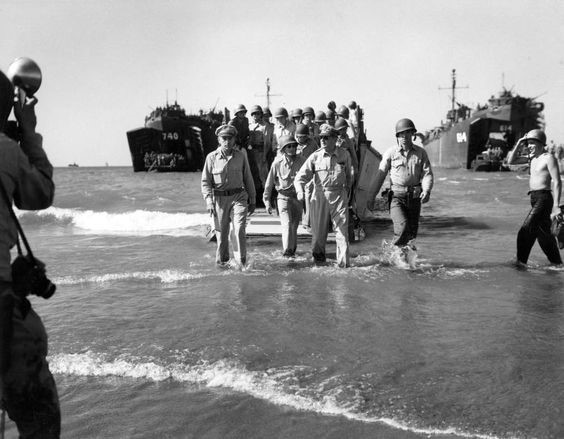 At the landing on Luzon on January 9, 1945, General Douglas MacArthur decided that wading was the right thing to do.

Perhaps Spencer Davis’s closest friend among Philippine leaders was Carlos P. Romulo. Like Davis, Romulo was a journalist. As Philippine ambassador to the U.S. and as Minister of Foreign Affairs, he knew that any information provided Spence would be treated with the highest integrity. When the famous U.S. Marine Corps Memorial was under construction near the Arlington National Cemetery, Romulo sent a diplomatic note to Secretary of State Christian Herter requesting that the list of campaigns at the base of the monument have “Philippine Insurrection” changed to the more accurate, “Philippine-American War.” He asked Spence to help the request appear in the Sunday newspapers. It did, but to no avail. When the monument was undergoing renovation in 2018, I made a similar effort. It was also unsuccessful; military history and heraldry officials demurred. The name had been officially changed to Philippine-American War by the Library of Congress in 1999, at the initiative of Ambassador Thomas C. Hubbard. 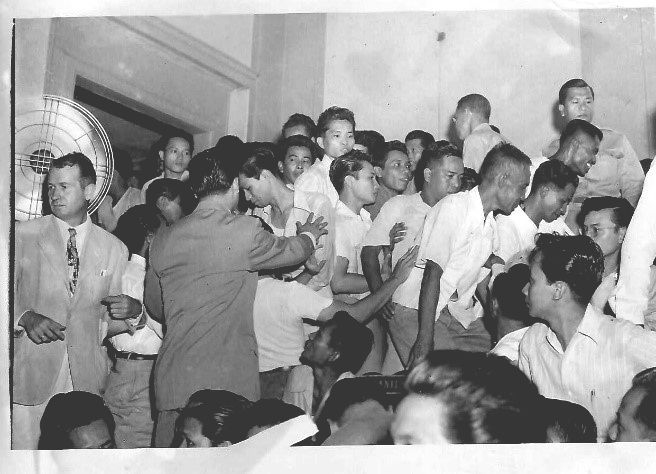 Question 3: We understand that following Spencer Davis’s passing in 1992, the family asked you to handle his papers. What did you find?

Spencer had always wanted to write a book, but never did. Maybe he knew too much. He did leave AP for a few years becoming in 1975, the Press Officer for the Senate Select Committee on Intelligence, the Church Committee, looking into operations of the CIA. For seven years he had an inside view of our nation’s most sensitive intelligence operations. He was one of the “Old China Hands” and during his years in Washington covering the State Department and White House, you would find him interviewing national leaders and accompanying Secretaries of State on their foreign travels. After sorting, his papers were taken to the Stanford University Hoover Institution where they reside in their archives. Also, in the museum on the USS Missouri in Pearl Harbor is a small memorial on his end of World War II reporting. This is a fitting location to record his memory; he had sat on top of turret two of a battleship’s 16-inch guns that fateful day in 1945, looking down and recording history.

Although I found no manuscripts or secrets, I did find some photos that are hopefully of interest to those who, like I, have a deep affection for the Philippines. Spencer Davis was held in high regard by the Washington Press Corps and elected President of the State Department Correspondents Association. He understood and loved the Philippines in the early struggling years following World War II. Perhaps Carlos P. Romulo said it best in 1955 when presenting Spence his new book, “Crusade in Asia, Philippine Victory.”

“To my good friend, Spencer Davis, the most reliable of all Washington correspondents, with the high regard and esteem of the author, Carlos P. Romulo.”

A personal note to his friend Spencer Davis, on the top of a two page letter from Philippine Minister of Foreign Affairs, Carlos P. Romulo, to the U.S. Secretary of State, Christian Herter, asking that the U.S Marine Corps Memorial change a campaign inscription from “Philippine Insurrection” to “Philippine American War.”

Rear Admiral Dan McKinnon retired from the United States Navy in 1991 as Commander, Naval Supply Systems Command, and 36th Chief of Supply Corps. He retired again in 2000 as President and CEO of “NISH, Providing Employment to People with Severe Disabilities.” He is President of the “Project Handclasp Foundation” sponsoring charitable projects in the Philippines.