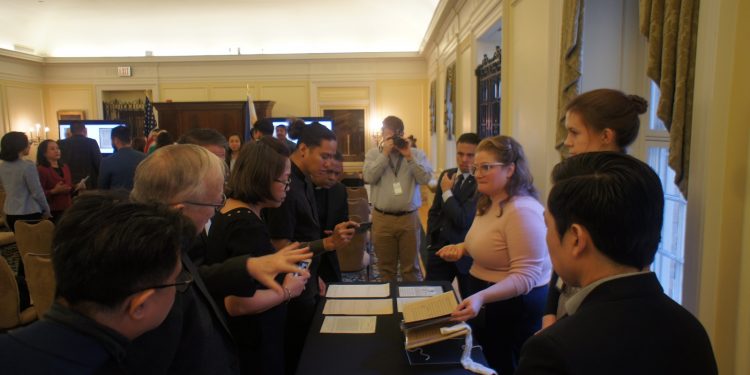 WASHINGTON, D.C.-  A special viewing and lecture on the Doctrina Christiana in Spanish and Tagalog, a rare manuscript and an important part of the Lessing J. Rosenwald Collection of the United States Library of Congress (LOC), took place at the Whittall Pavilion in Washington, D.C. co-organized by the Philippine Embassy, Principalia sa Bulalacao  and the US-Philippines Society on October 28, 2019.

Consisting of seventy-four pages of text in Spanish, Tagalog transliterated into roman letters, and Tagalog in original Baybayin script, the Doctrina Christiana was printed in the Philippines in 1593 as part of the effort to introduce Christianity. It contains basic biblical texts, including the Lord’s Prayer, Hail Mary, and the Salve Regina, as well as the Ten Commandments, and the Sacraments of the Holy Church.

“It was clearly instrumental in the ‘conversion and instruction’ of Filipinos, to use the words of Governor Dasmariñas in his 1593 letter to King Philip II,” noted Minister Jose Victor V. Chan-Gonzaga who represented the Embassy, in brief remarks during the event.

“The use of the ancient Baybayin script in some parts of the book likewise reminds all of us of the existence of pre-colonial Philippine culture. It bears witness to the narrative of a Philippine community that existed even prior to the arrival of the Spanish colonizers,” he added.

Dr. Stephanie Stillo, Curator of the LOC Lessing J. Rosenwald Rare Books Collection, delivered a short lecture on the Doctrina Christiana, and how “the constellation of fortunate events” preserved the precious volume over the centuries, and through wars and natural disasters, with the surviving copy eventually finding a home at the Library of Congress.

The book is part of an ambitious and prestigious collection of graphic arts owned by Lessing J. Rosenwald, a philanthropist who in 1943 during WWII announced his donation of rare books and future acquisition to the American people. At the time of his death in 1979, over 2,600 rare books and 30,000 drawings were given to the Library of Congress as a rich potential resource for study and remains one of the greatest act of cultural philanthropy.

“The unifying concept of the collection was the art of printing. The technology of printing encouraged and facilitated historical change,” Dr. Stilo stated.

The book is printed on delicate paper made from mulberry tree using wood blocks with intricately carved roman text and uniquely indigenous Baybayin scripts. Wood inked with burnt wood and lacquered glue is pressed by hand to transfer the relief impression. The process was notably used by missionaries. 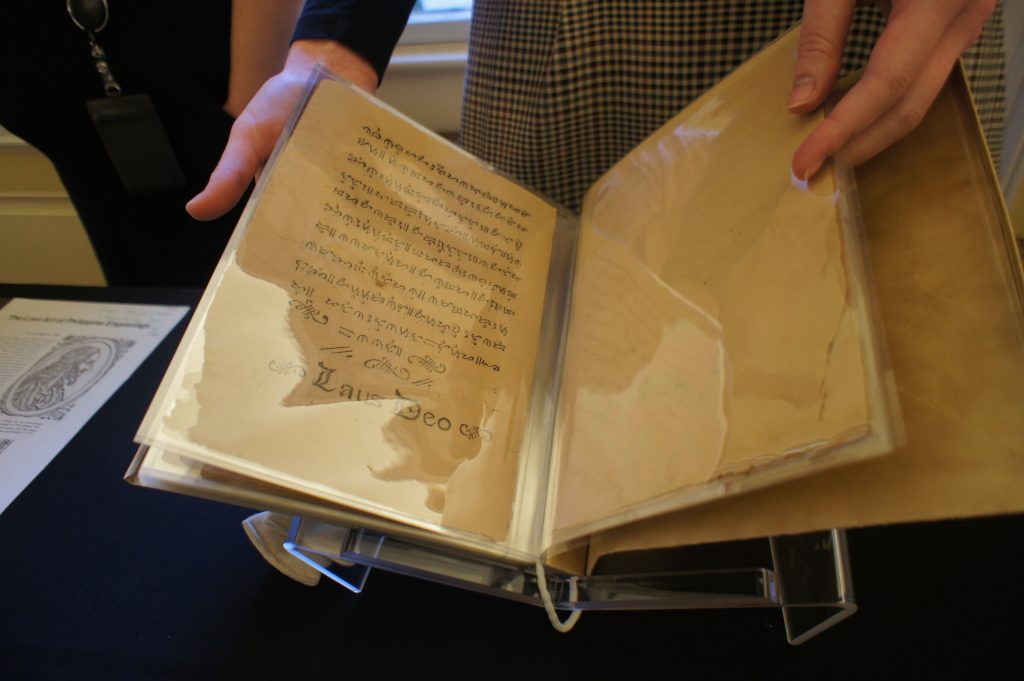 Doctrina Christiana in Spanish and Tagalog (1593). Viewers marveled at the manuscript. Each page is meticulously preserved. A digital copy may be viewed online.

Dr. Stillo and Rocky Andal Brito, Founder & Executive Director of the Principalia sa Bulalacao, then engaged the audience in a lively question and answer discussion on the history and significance of the Doctrina.

“The Doctrina Christiana includes translations of Christian catechism and hymns from Spanish to Old Tagalog and Baybayin, an indigenous writing script of the Philippines. Thus, it offers a glimpse to the precolonial heritage of the Filipino people. It is a book on human values published during the Age of Discovery and is very much applicable to our modern society to teach us about kindness, generosity, humility and a plethora of principles on humanism. Perhaps, it is worth looking back to the teachings of the past and enter a new age —the Age of Rediscovery, for the betterment of the future and our posterity,” said Mr. Brito who was the one that conceptualized the special viewing.

After the discussion, the guests at the special viewing, including Rev. Monsignor Dennis Kuruppassery who represented the Holy See, were able to closely examine the Doctrina Christiana displayed on a table at the back of the pavilion.

“The presentation of the Doctrina Christiana was a uniquely informative event. First, the famed document stands as a rare example of 16th century innovations in print technology, fully deserving a place in the Library’s rare books collection. Second, the Doctrina provides insights into how Filipinos were introduced to the basic Christian texts. And third, the script confirms an advanced use of the written word in the Philippines’ pre-Hispanic period,” US-Philippines Society President Ambassador (ret.) John Maisto said in a statement after the forum.

“We thank the Library of Congress, especially the Rare Book & Special Collections Division, for this timely celebration of Philippine history and culture. The library of the American people and their representatives could not be a more fitting venue for the commemoration of October as Filipino American History Month, and which also happens to be National Indigenous Peoples Month in the Philippines,” Philippine Ambassador to the United States Jose Manuel G. Romualdez also said in a statement. 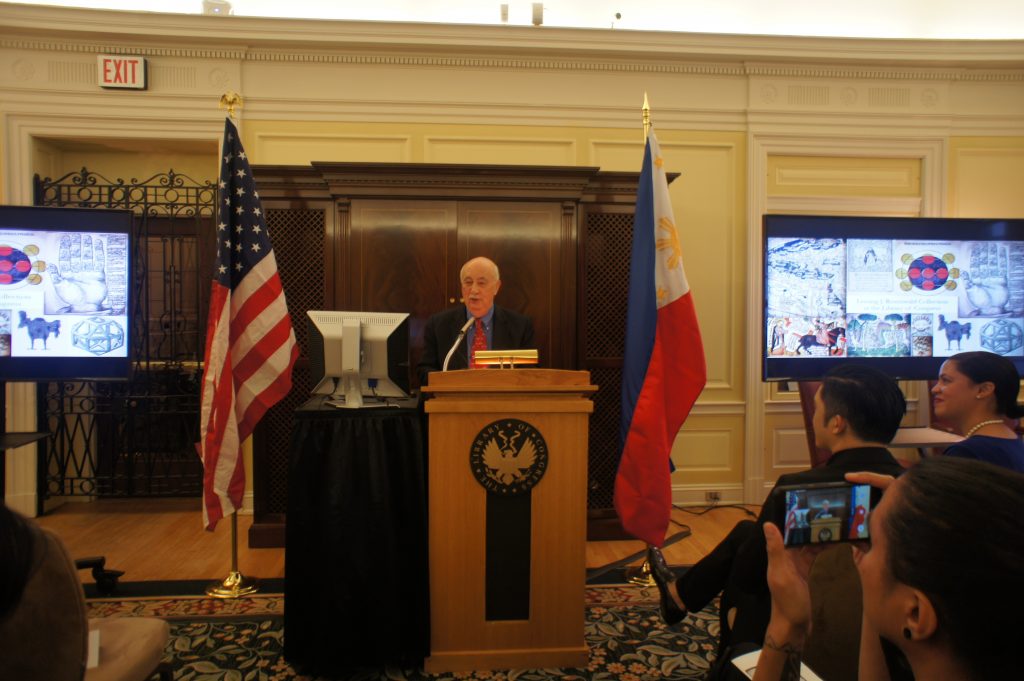 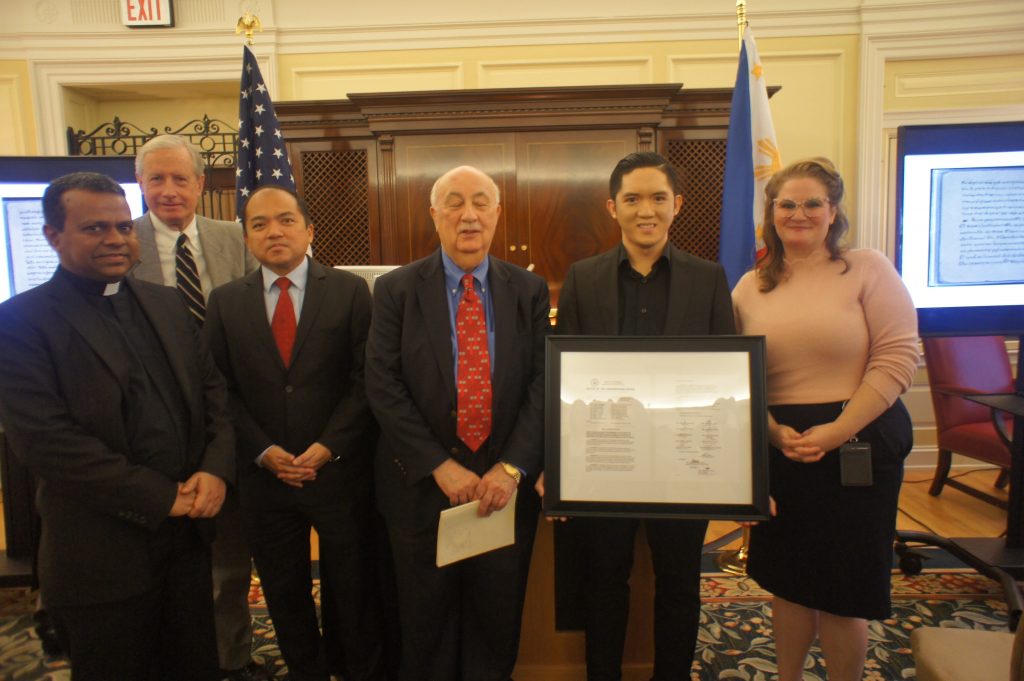