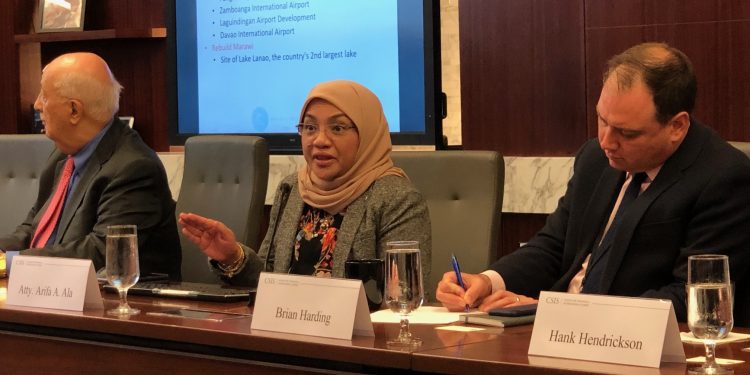 WASHINGTON, D.C.- During a September 26 CSIS roundtable on “Development Opportunities in Muslim Mindanao and Islamic Finance,” Philippine Central Bank (BSP) Managing Director Atty Arifa Ala made a detailed and highly informative presentation on ways Islamic banking can facilitate business growth, especially in sensitive “un-banked” areas of the southern Philippines. Co-sponsored by the US-Philippines Society, the forum traced recent developments, including the ongoing transition to Bangsamoro autonomy and enactment of a new Islamic Banking law, and provided insights into implementing regulations that will guide Islamic banking operations. Atty Ala described how Sharia-consistent banking can complement the Philippines’ traditional banking system and deliver more services to needy areas of the South.

Mindanao, the bread basket of the Philippines, supplies 43 % of the country’s farm produce, and yet the region has the highest incidence of poverty. For decades, clan rivalries and security threats have stalled the region’s progress. President Duterte, the first president from Mindanao, demonstrated the political drive to enact reforms to promote improved autonomy and development in Mindanao, in part through empowering the Islamic banking sector.

In July 2018, President Duterte signed the Bangsamoro Organic Law that created the Bangsamoro Autonomous Region in Muslim Mindanao. On August 22 this year, he signed the Islamic Banking Law (Republic Act No. 11439) providing for the regulation and organization of Islamic Banks to address the needs of the under-served Muslim population particularly in the BARMM.

“Around 92 % of cities and municipalities in the BARMM are un-banked areas. While the number of banks has increased in all other regions of the Philippines, the BARMM remains under-served,” Ala stated, citing a BSP report. There has been only one Islamic bank to serve the unique needs of the Filipino Muslim minority, the Al-Amanah Islamic Investment Bank of the Philippines, which was established in 1973. However, a lack of infrastructure and legal restrictions have kept that state-owned bank from operating as a full-fledged Islamic bank.

Atty Ala explained that under new Islamic Banking law regulations, the conduct of banking operations will be in consonance with Shari’ah principles of “justice and fairness through the equitable distribution of wealth.” In practice, it “prohibits the undertaking or financing of antisocial and unethical business such as gambling, prostitution, liquor, nightclubs and narcotics.” Shariah prohibits charging interest or setting a predetermined rate of return. Unlike conventional banking, the depositor assumes the role of investor, taking risks in the loss and share of earnings depending on the outcome of the transaction. In offering Shari’ah compliant financial products, banks will be meant to be more inclusive, offering financial services to under-served Muslim and non-Muslim small depositors and micro businesses in the BARMM. Regulations under the new law will allow conventional banks to provide Islamic financial services.

The BSP is mandated to exercise regulatory powers and supervision over Islamic banking operations. Atty Ala serves as the BSP’s coordinator for Islamic Banking and Finance, chairing the inter-government agency tasked with drafting the implementing rules and regulations under the expanded Islamic Banking law. Islamic banks will follow conventional banking and corporation law, as well as being Shari’ah complaint. To level the playing field among conventional and Islamic banks, the Bureau of Internal Revenue has drafted implementing rules for tax neutrality.

“The business model for Islamic Banking and finance is sound, prudent and fosters financial stability. Prospective investors are optimistic with the maiden Sovereign Sukuk issuance or financial certificates representing investments in tangible assets with profit-sharing related to the underlying asset or project,” Atty Ala explained.

“The expanded law may also trigger inflows of foreign investments which can in turn be deployed in building necessary infrastructure, participation and preparedness in ASEAN integration and liberalization of the entry of foreign banks in the country,” she stated.

“Islamic banking and financial services and products are increasingly globally accepted, with more than 600 Islamic financial institutions operating in 75 countries and growing at an annual rate of 15-20 percent,” she added.

Successful implementation of the new Islamic Banking law will require a team of experts in Islamic banking, solid accounting, legal and financial infrastructure, entry of licensed Islamic banks, and a strong risk management system. The World Bank and the Asian Development Bank are assisting with technical workshops on capacity building.

Representatives from the ADB, IMF, USAID, the Philippine Embassy, CSIS, the US-Philippines Society and others attended the “by-invitation” forum. Deputy Director of the CSIS Southeast Asia program Brian Harding and US-Philippines Society President Amb John Maisto closed the program, noting the importance of promoting increased public awareness of Islamic banking’s potential to contribute to economic development in Mindanao/Sulu during the transition to improved autonomy arrangements in the southern Philippines. 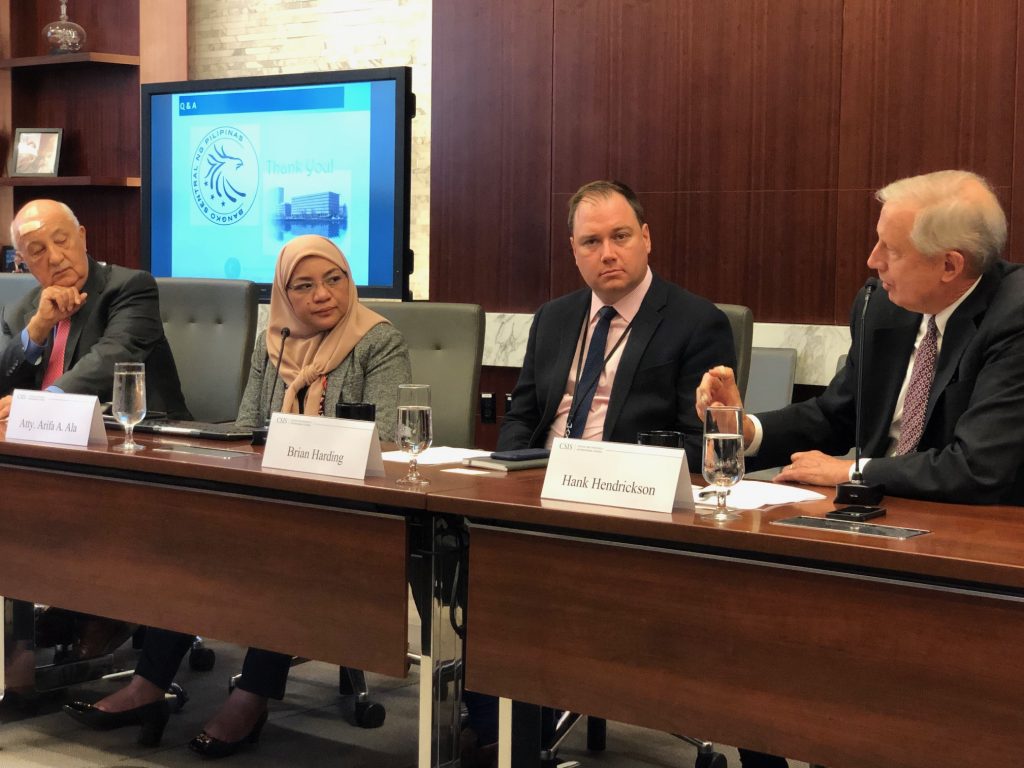 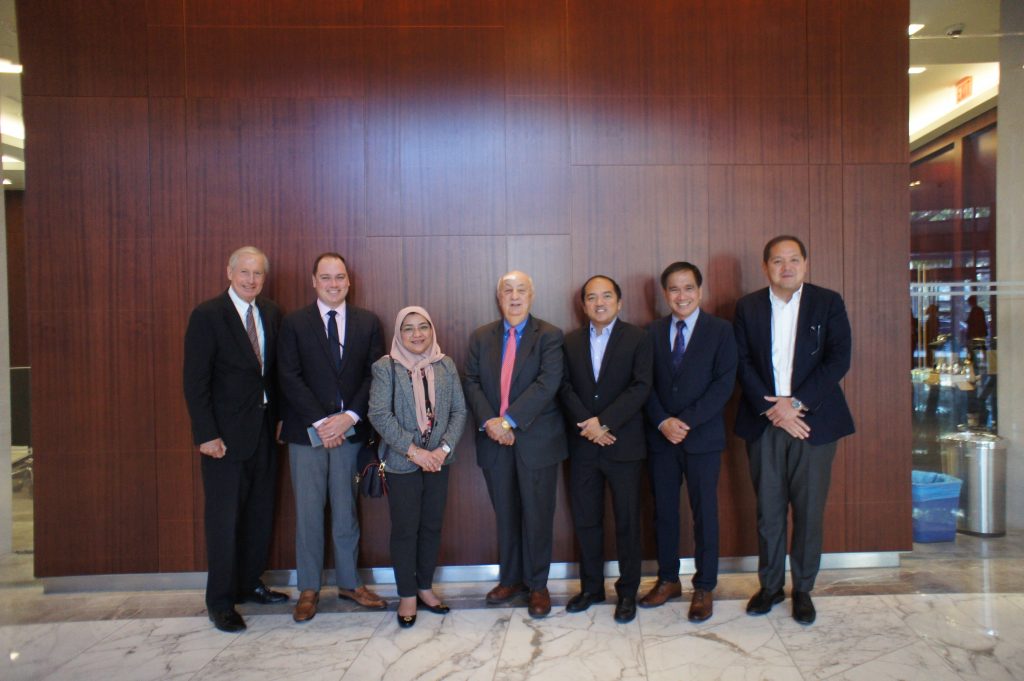