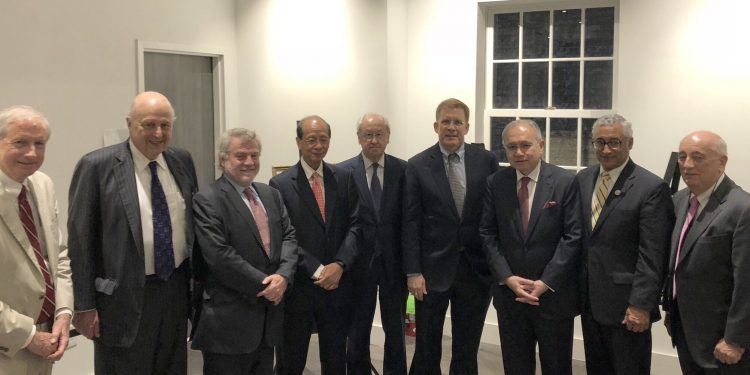 Washington, D.C. –  The US-Philippines Society honored the late Washington Z. SyCip with a celebration of his remarkable life and legacy on June 26 at the Philippine Embassy’s renovated “Old Chancery” building in Washington, D.C. Mr. SyCip helped found the Society and served as an honorary chair. He would have turned 97 on June 30. 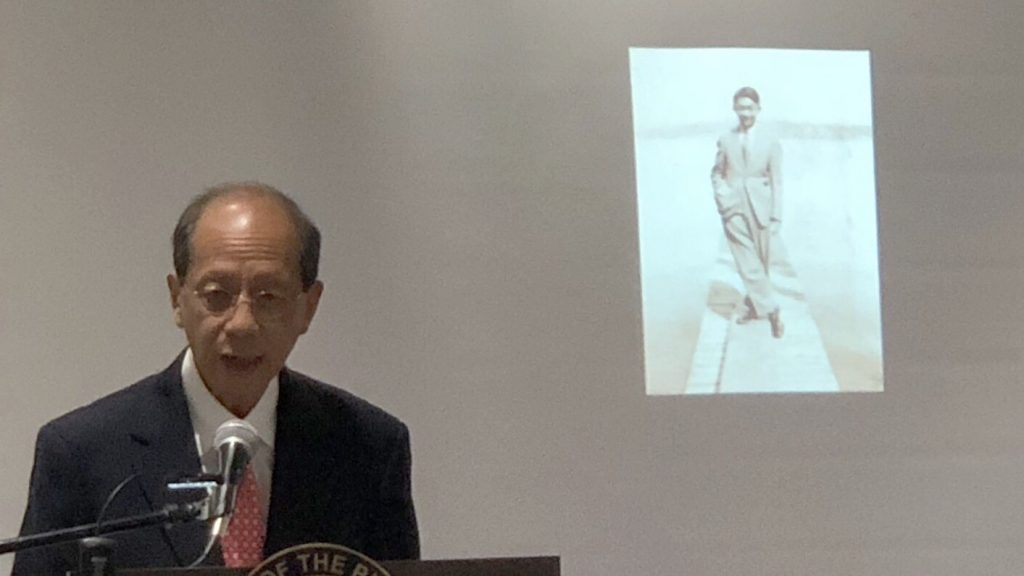 George SyCip provides a family perspective with a picture of young Wash SyCip in the background.

Ambassador Jose Manuel G. Romualdez welcomed guests that included Congressman Bobby Scott of Virginia, State Department Acting Principal/DAS W. Patrick Murphy, distinguished scholars, thinkers and doers, members of the community and others, many of whom benefited directly from Mr. SyCip’s support for advancing educational opportunity. In his remarks about Wash SyCip’s influence, Ambassador Romualdez recalled weighing the offer to come to Washington last year to represent the Philippines, saying that when Wash SyCip expressed full confidence in the appointment and urged him to accept the posting, he had to say yes. Wash was a consistently strong advocate for service to the country. He also believed in the Filipino. “Wash had no doubt in his mind that the Filipino is world-class, and can compete with the best among the best, whether in accountancy, education, law, science, or business,” said Ambassador Romualdez.

The evening was full of Wash SyCip memories from people who admired and learned from him. Former ambassador to the Philippines John Negroponte, who also serves as co-chair of the US-Philippines Society, detailed how Wash SyCip provided wise counsel and advice to American diplomats throughout the second half of the 20th century and well into the first two decades of this century. On Wash’s legacy, Negroponte said, “I cannot think of anyone who inspired so many, so effectively, over such a long period as Wash SyCip.” 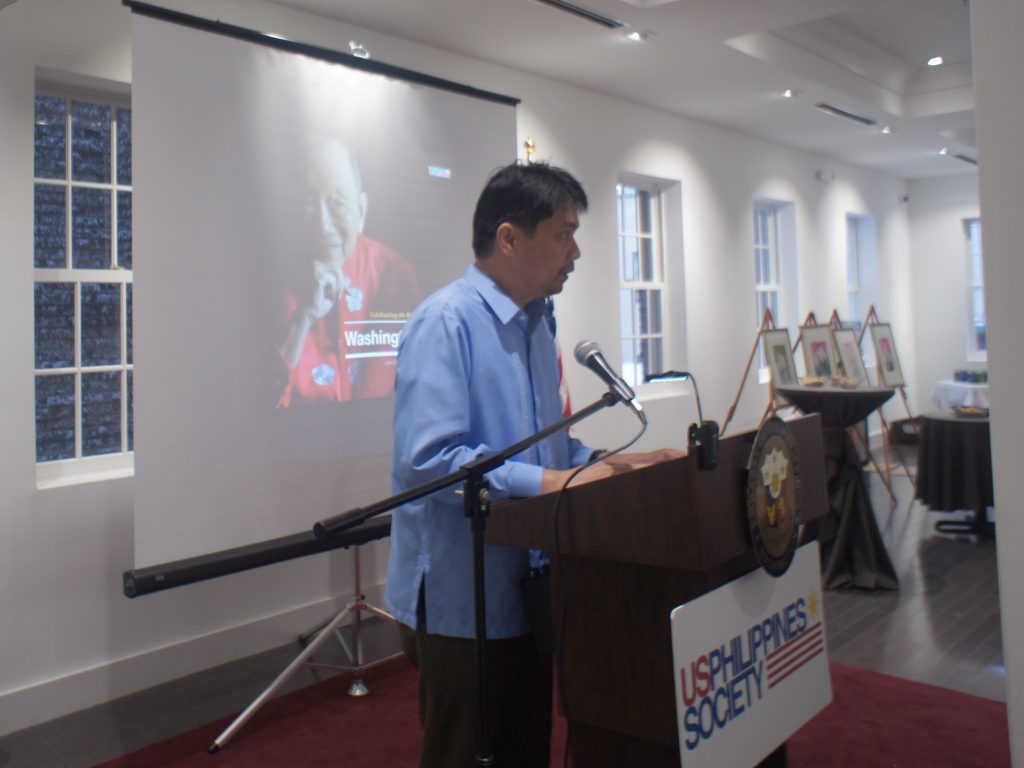 Georgetown Professor Erwin Tiongson provided a fascinating account of Wash’s family ties to America and revealed the story connecting Washington SyCip to Washington, DC, following his father’s successful litigation before the Supreme Court in 1921, the year Wash was born. He recounted that Wash’s father named him Washington in celebration of that victory – and of the Philippines within the U.S. judicial system.

SAIS Professor William Wise provided a broad and insightful perspective by framing Wash SyCip’s life around the evolution in U.S.-Philippines relations, beginning with Wash’s wartime service as a codebreaker, through key periods in the post-war bilateral relationship, and into the 21st century. Wash’s brilliant mathematical skills shaped his army service and, of course, his success in accountancy.

Mark Fuller, a member of the Asian Institute of Management’s governing board, successful businessman, professor and philanthropist, underscored Wash SyCip’s commitment to advancing educational opportunities. Fuller recalled that in the early 1960’s there were no business schools in Asia and described how Wash was determined to address that need. Working with Mark’s father from the Harvard Business School, Wash was the driving force behind the establishment of AIM in 1968, an institution that has served Asia and helped bridge the Philippines and America for 50 years.

The US-Philippines Society Honorary Chair Maurice “Hank” Greenberg joined the remembrance event with a video message noting his long and productive personal and business ties with Wash SyCip. Mr. Greenberg praised Wash’s business acumen and vision, and recalled that when he formed an international advisory board for AIG, “Wash was the first person I contacted.” And, it proved to be absolutely the right decision. “His insights on Southeast Asia and the Philippines were terrific for everyone on the board. Experienced foreign policy people always got something from what Wash had to say,” observed Mr. Greenberg.

SGV Chair J. Carlitos Cruz, a director of the US-Philippines Society, also joined the program by video, detailing Wash SyCip’s legacy of leading the firm into a world-class business organization serving Asia and beyond, and boasting an “alumni” network of 30,000. Wash was a hands-on inspiration to generations of that network as one of the Philippines’ most storied entrepreneurs.

Wash SyCip’s son, George, provided a powerful family narrative, underlining the importance that generations of the SyCip family attached to education. He noted that Wash SyCip’s father attended school in Michigan, as Asians faced less discrimination in the Midwest than on the coasts during that early period. At the same time, George praised the work of American teachers in the Philippines for their commitment to education, and the opportunities that public schools provided to Wash in his thirst for education.

In poignant remembrance, George finished his remarks with what he described as Wash SyCip’s four pillars in life – the basics that he reiterated to his children and extended family. 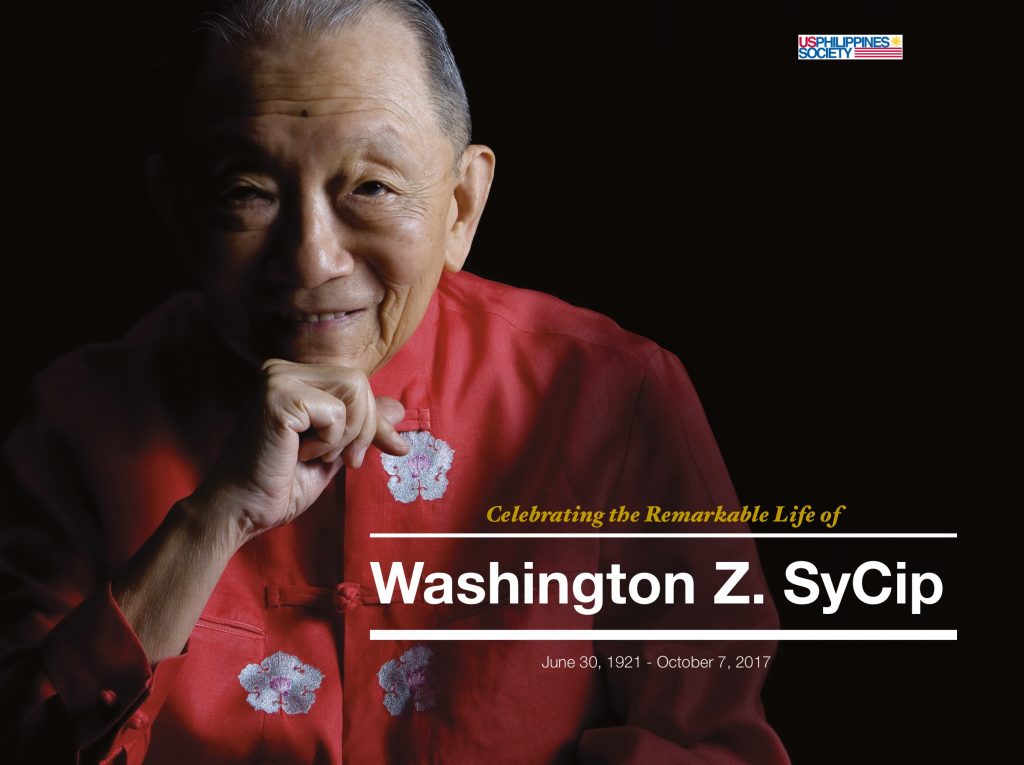 First was education. George cited his father’s adage that, “they can take away your possessions, but they cannot take away your education,” saying that sense of purpose was critical in the family’s efforts to rebuild lives and business after losing so much during World War II.

The second SyCip pillar was knowledge of and commitment to the Golden Rule. Wash always reminded that “goodness with knowledge is golden, but knowledge without goodness is evil.”

Third, Wash emphasized that enjoyment of life is essential to living your life fully – and “the show must go on.”

The fourth SyCip pillar was simply the one all the others rested upon – “have a bigger purpose in life.”

Society President Amb John F. Maisto provided closing remarks noting that it was a tribute to Wash that so many people wanted to participate with personal stories about his legacy. Everyone recalled their Wash SyCip memories – but also learned something new about this remarkable, wise, good man. 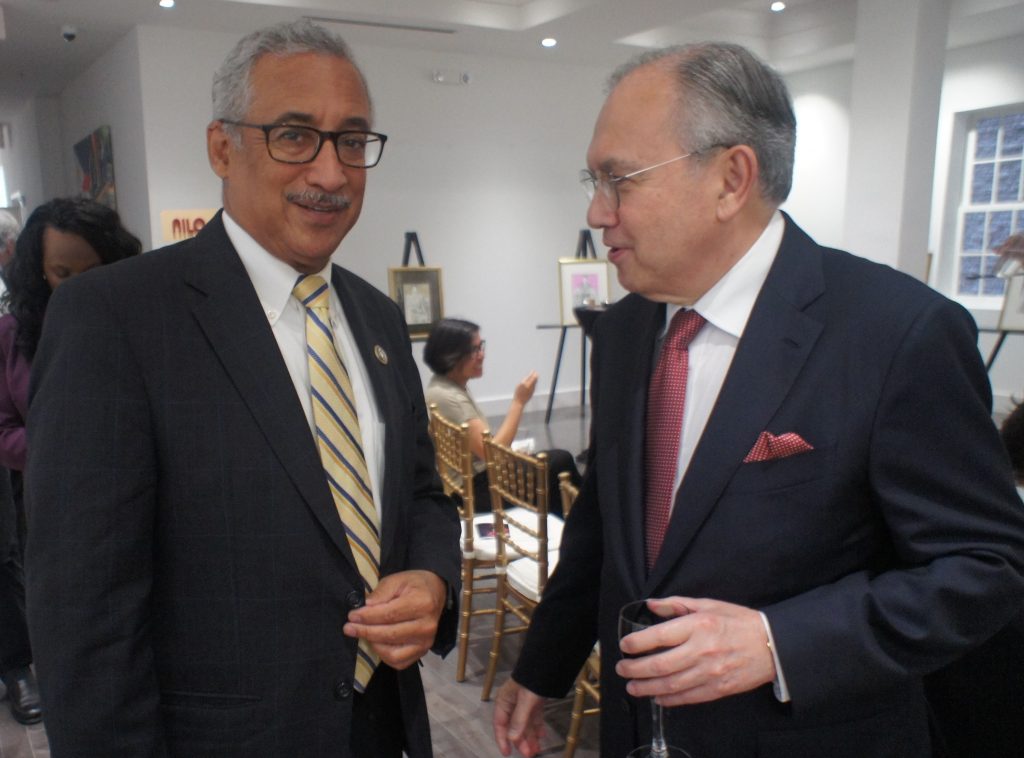 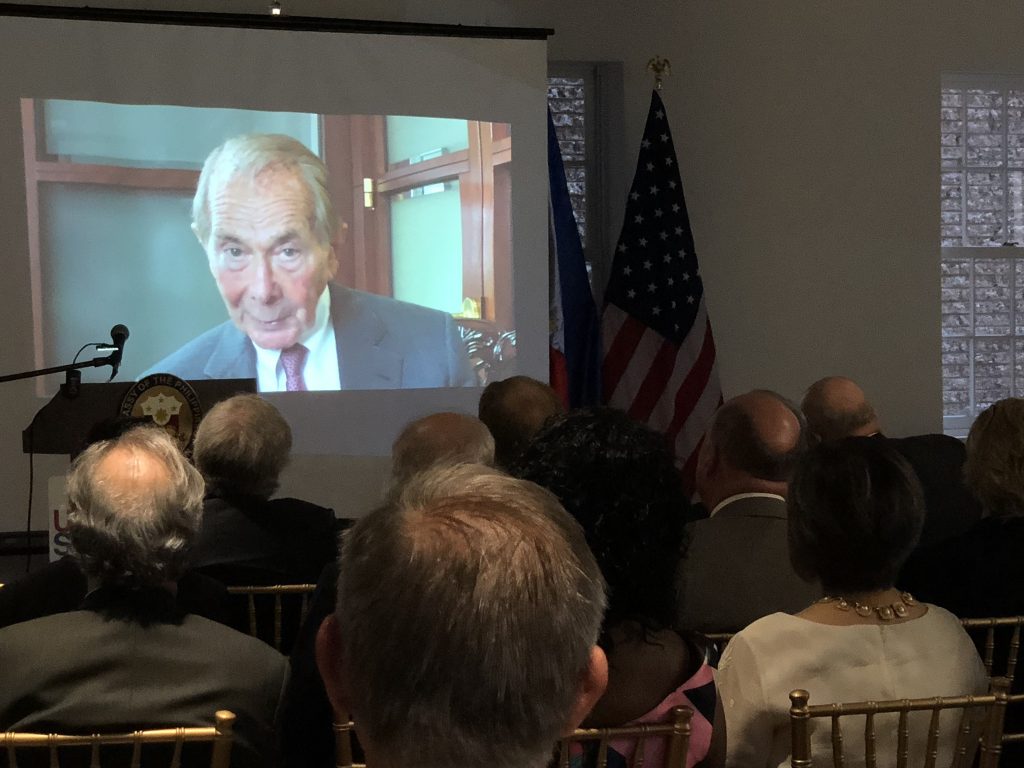 Architecture, Green Buildings and Sustainability in the Philippines