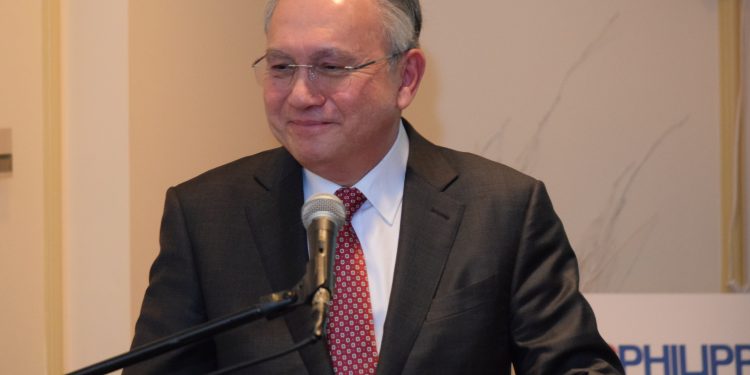 I arrived from Washington, DC last July 2 in time to make it for the 242nd US Independence Day celebration at the Makati Shangri-La ballroom that was jam-packed.

The annual US Independence Day celebration is always well attended, but this year saw an unusually high number of people coming from all sectors of society – politicians, diplomats, Cabinet officials, legislators, members of the military, representatives from the business sector, NGOs, society bigwigs, and ordinary individuals from all over the country.

The presence of our Foreign Secretary clearly emphasizes the importance we put on our relationship with the United States as “special” even while we pursue warmer relations with other countries such as China. Actually, Chinese Ambassador Zhao Jianhua was among those who attended the event.

There is absolutely no doubt my good friend, US Ambassador Sung Kim (looking very distinguished in barong Tagalog), has done an excellent job since his arrival less than two years ago. Ambassador Kim has made a lot of Filipino friends in such a short period of time.

No one can dispute that the United States is still the most influential country in the world and certainly in the Philippines. Now more than ever, the partnership between the two nations is even better because both President Duterte and President Trump believe in the sovereignty of each nation even as they work together on mutual issues and concerns such as trade, security and extremism.

When President Trump visited Manila in November, he exhorted US allies to be “strong, independent and prosperous, in control of their own destinies, and satellites to no one.” This is certainly in accordance with President Duterte’s new independent foreign policy that seeks to explore new friendships but asserts our sovereignty as a nation that has its own way of doing things, especially in solving issues that affect the country and the people. In short, we can travel our own path and pursue our own destiny as an independent nation.

Of course, the US is one of our closest economic and top trade partners, with American businesses having made a lot of investments in the Philippines approximating P235 billion.

During the meeting between Secretary Cayetano and US State Secretary Mike Pompeo in Washington last month, the two officials reaffirmed the strong alliance between the US and the Philippines, and vowed to work closely together to further reinforce this partnership.

President Duterte himself publicly acknowledged the technical assistance provided by the United States during the siege of Marawi City by ISIS-affiliated terrorists. While the siege was ongoing, the US pledged P730 million in emergency relief and assistance for the displaced residents, while the US Agency for International Aid (USAID) provided facilities with medical supplies and services for the sick, particularly children and pregnant women. Just recently, the US pledged an additional P182 million worth of aid for humanitarian and relief efforts in Marawi City.

In his remarks during the event in Shangri-La, Ambassador Kim said the special relationship between our countries is “built on deep personal, economic and security ties,” with the alliance and partnership remaining incredibly strong, having tremendous potential for further growth. There is no limit to what our two countries can achieve together, the ambassador added.

In the less than two years since he arrived, Ambassador Kim says he already considers the Philippines as his new home because of all the friends he has made in the country. Undoubtedly, people have many good things to say about the American ambassador.

In undertaking the work at the Philippine embassy in Washington, DC, the narrative that we use is that strong bilateral ties are anchored on the deep people-to-people relations between the Philippines and the United States that have grown stronger, staying solid despite the bumps and challenges that have faced us over the years.

I’m happy to say that our own Philippine Independence Day celebration in Washington, DC was also very successful and well attended, with members of the Washington diplomatic community, US officials and legislators as well as many distinguished members of the Filipino-American community present.

America is home to an estimated four million Filipinos, who represent the third largest community of Asian-Americans in the US. All the US congressmen and senators I have met only have high praises for Fil-Americans in their districts, saying they are hardworking, talented and productive.

Which is why, whenever I talk to members of the Fil-Am community, I impress upon them the vital role that they play in shaping and strengthening the relationship between the US and the Philippines, stressing that their productive presence serves as a strong anchor for the enduring alliance between the two nations.

No matter what happens and when all is said and done, the relations between the United States and the Philippines will remain solid. Ambassador Kim and I are in complete agreement that the strong people-to-people ties are what make our job relatively easier.