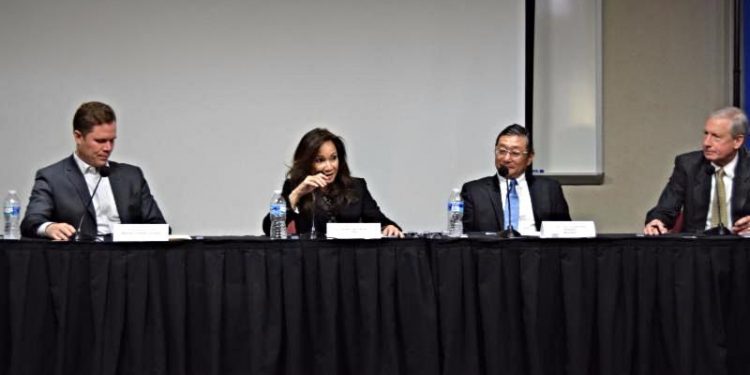 WASHINGTON, D.C.- At the April 28 symposium “Philippines 2016: Governance, Growth, Development and Security” leading officials and analysts from the U.S. and the Philippines reflected on initiatives launched under President Aquino as he concludes his six-year term. Panelists highlighted gains from reforms and offered proposals for sustainable growth, poverty reduction and improved security as priorities of the next administration.

Under President Aquino, the Philippines has become one of the fastest growing economies in Asia and achieved progress on an anti-corruption and good governance agenda. The regional security environment and conflict in the southern Philippines present challenges. The US remains a key economic partner and strategic ally in the face of changing regional dynamics. U.S. development partners credit the Philippines’ pioneering efforts in tackling anti-corruption and developing inclusive growth initiatives as a means to reduce poverty, according to panelists.

Ambassador Cuisia opened the conference pointing to an invigorated partnership based on shared economic prosperity and a rules-based approach towards peaceful resolution of territorial claims disputes in the South China Sea. His keynote address also referred to broader cooperation on containing ISIS terrorist threats. He cited the vital role of cultural and educational diplomacy through people to people linkages in sustaining bilateral ties.

During the panel on Governance, Growth and Development, Motoo Konishi, former World Bank Country Director for the Philippines emphasized the success of the Aquino administration in reducing corruption and improving governance, as a precondition for economic growth. To sustain robust growth, Konishi underscored the importance of building resilience to the effects of climate change and environmental disasters that threaten crops and livelihood of the most vulnerable. A third component to eradicating extreme poverty is peace and security. The Aquino Administration has actively pursued these three objectives, according to Konishi.

“Fighting poverty means that you have to know where the poor live, and your investments need to be targeted to those people. Fast growth doesn’t eliminate poverty, you have to choose your policies carefully,” Konishi said.  The Aquino Administration focused on pro-poor policies. Konishi added that the Philippine experience will be a highlight of the World Bank’s flagship World Development Report this year. The World Bank considers the Philippines’ Conditional Cash Transfer program the second largest and best targeted social safety net program in the world.

“The Filipino people are looking to more changes and to the continuation of reforms that the Aquino Administration started,” USAID’s Gloria Steele stressed, highlighting the accomplishments of the Aquino Administration in competitiveness, transparency, fighting corruption, tourism, infrastructure, education, and health. Growth needs to be geographically dispersed throughout the country. Steele cited ongoing needs to improve airport infrastructure and energy regulations as components of growth that should be the focus of the next administration.

Matthew Bohn of the Millennium Challenge Corporation lauded the first compact with the Philippines, which supported poverty reduction, inclusive growth, and the reduction of corruption, as being one of MCC’s best compacts. He cited dramatic improvement toward these goals through the community-led development KALAHI-CIDSS projects that increased from 2700 to 4000 projects. Some $434 million was invested in 220 kilometers of roads. Third, the modernization of the tax administration improved broad-based tax revenue.  He also expressed confidence the Philippines will be able to sustain its growth and development largely because of the groundwork that the Aquino Administration has set in place. “The Aquino Administration has successfully put down deep and important roots for creating the conditions for sustained economic growth,” Bohn said.

Priorities on Security and Peace
Professor Zachary Abuza of the National War College described the modernization of the Philippine armed forces, deepening defense relations with the United States through the Enhanced Defense Cooperation Agreement (EDCA), and Balikatan exercises as some of the major advances of the Aquino Administration. However, peace and security challenges remain in Mindanao, including the coercive impact of political dynasties and use of private armies.  “For any lasting peace in Mindanao, private armies have to be targeted,” said Professor Patricio Abinales of the University of Hawaii. Professor Abinales also linked private armies with the pervasive presence of illicit trade that undermines economic progress.  Professor Ruth Wedgwood of Johns Hopkins SAIS, a law of the sea expert, moved the discussion from internal to external security challenges, saying historical claims are inconsistent with UNCLOS principles.

Referring to the impending decision of the Arbitral Tribunal, Professor Wedgwood further stated that China could be put in a difficult position in responding to the interests of ASEAN member countries.
Senator Lugar’s Optimism on Shared Benefits in a Continued Strong Bilateral Relationship
In his keynote address, Senator Richard Lugar, provided a personal perspective on the Philippines, reviewing the 30-year transition since the EDSA Revolution of 1986, recent progress under the second Aquino Administration, and what lies ahead for relations between the Philippines and the United States. 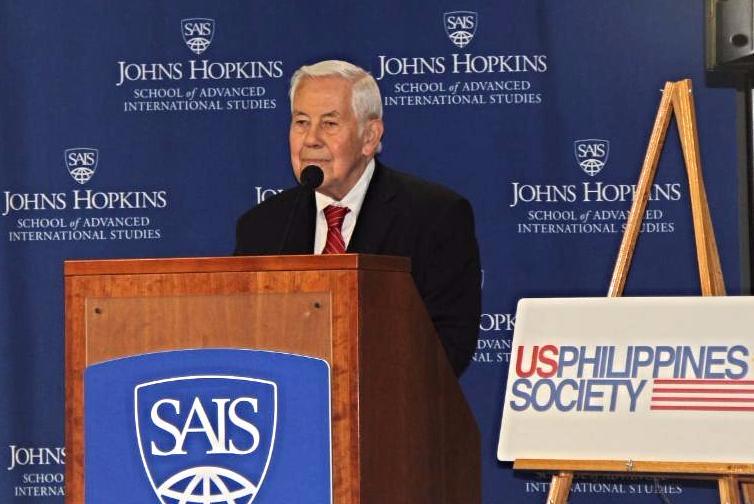 He spoke of his role in leading the US election observer delegation to Manila in 1986, and the challenging process of re-framing American policy towards former President Marcos and the Philippines in the lead up to EDSA. He described as far too simplistic an idea at that time within some US government circles that policy was a stark choice between Marcos and the Communists.
“One of its many flaws was that it ignored the fundamental attachment of the Filipino people to democratic values. And certainly the world saw it when TV cameras broadcast around the world the huge crowds, up to a million people, that attended Cory Aquino’s rallies after the balloting in what became the 1 986 EDSA Revolution that restored democracy.  If his mother was a symbol of the Filipinos political empowerment, President Aquino III is the symbol of economic empowerment.  He leaves with some of the highest approval ratings for a departing president, and a solid record of robust economic growth under his watch. ” the Senator added.
Senator Lugar also drew attention to the 400,000 Filipinos who served with the American military in World War II, and the more than 3.5 million Filipino-Americans who today call the United States their home. He noted that more Americans are beginning to retire in the Philippines. He reiterated President Obama’s remarks when he met President Aquino in Washington a few years ago that “we have incredible person-to-person relations between our two countries.” He added that mutual affection between citizens would remain strong and the US-Philippines Society would be a major factor undergirding that affection. 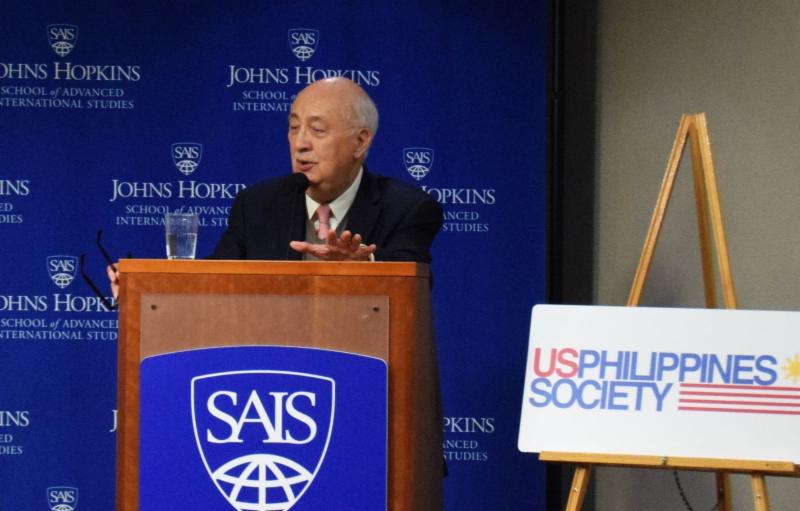 Ambassador (Ret.) John F. Maisto, President of the US-Philippines Society, remarked, “Drawing on his deep well of experience in politics, international affairs, and in-depth knowledge of US- Philippine relations, Senator Lugar provided us with insight into challenges facing both countries in this election year. While acknowledging some bumps in the road ahead, he delivered a fundamentally optimistic message that shared values will continue to underpin strong bilateral cooperation based on democracy, open trading systems, and a commitment to peace and stability in the Asia-Pacific region.”
“Senator Lugar is a genuine friend of the Philippines who has done so much for our democracy and development. We thank him for his insightful and very personal Keynote Address,” said Philippine Ambassador to the United States Jose L. Cuisia, Jr. 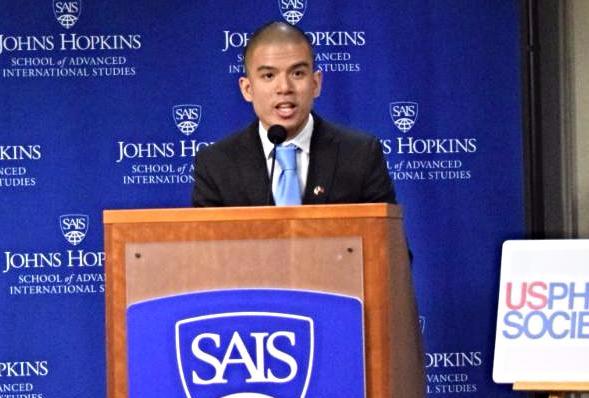 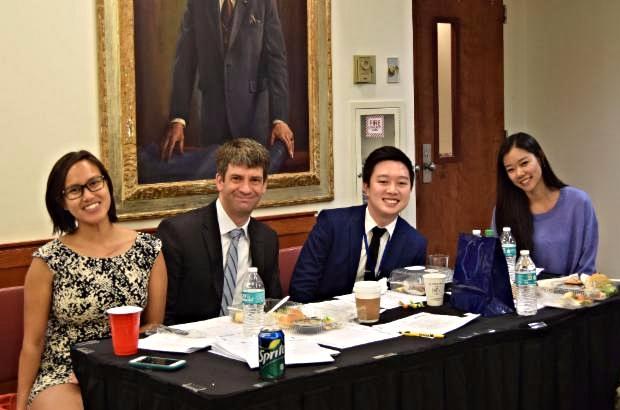 U.S. and Philippines Reaffirm and Strengthen Multi-Faceted Alliance into the 21st century

Positively Filipino: “What is the US-Philippines Society?” by Ambassador John F. Maisto

Past EventsStrategic and PoliticalTrade & Investment