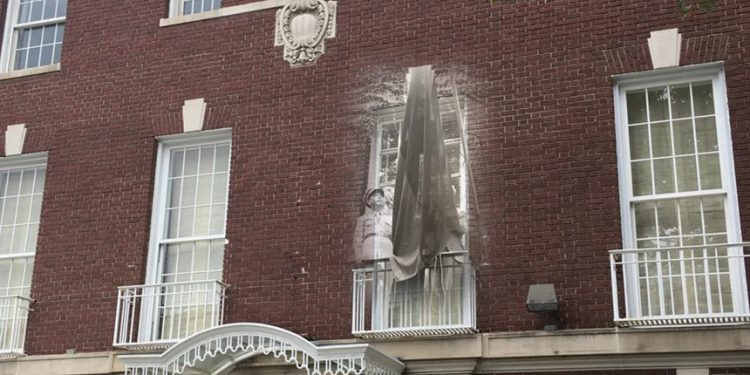 Image recreation of Resident Commissioner Carlos P. Romulo during a flag-raising ceremony at the Old Philippine Chancery in Washington DC, August 17, 1945, signifying peacetime and end of WWII. Photo credit: Philippines on the Potomac-DC

Join us as Liana Romulo, General Carlos P. Romulo’s granddaughter, shares personal and public life stories of General Romulo, one of the Philippines’ greatest public servants, well-respected diplomat and international advocate for cooperation and free market. He was the first Asian and only Filipino to serve as President of the United Nations General Assembly. He was Philippines’ National Artist having authored 22 books and winner of 1941 Pulitzer Prize. He was a Brigadier General in the U.S. Army and aide-de-camp to General Douglas MacArthur during WWII.

After the war, General Carlos P. Romulo and his family resided in Washington D.C., including as Philippine Ambassador to the United States.

In honor of Carlos P. Romulo, the US-Philippines Society established an awards program to recognize outstanding achievements in sustaining and strengthening bonds between the United States and the Philippines.

To join this live program, please register at https://cprindc.eventbrite.com