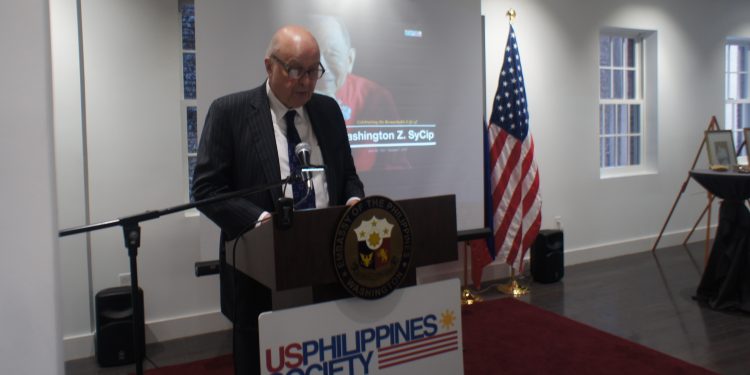 Ambassador Romualdez, George SyCip, friends and colleagues.  I am privileged to join you this evening to celebrate the remarkable life and legacy of Washington SyCip. In my capacity as a former ambassador to the Philippines I am honored to represent a long line of American diplomats who sought and benefited from Wash’s wise counsel.

There are numerous milestones linking Wash SyCip to the United States beginning with the name his parents chose to memorialize his father’s success in winning a court case here in Washington in 1921, the year Wash was born. I look forward to Professor Erwin Tiongson’s insights into that fascinating story in a few minutes.

Wash’s graduate education in the United States and his wartime service in the U.S. Army forged lasting bonds between a young Wash and America. Following liberation and the end of the Pacific War, Wash was poised and ready to play a role in rebuilding a severely damaged economy by getting the engines of business and commerce up and running, as the Philippines took its place as an independent member of the post-war community of nations.

In 1946, the year Wash founded what would grow into the prestigious firm of SyCip Gorres Velayo, President Truman appointed Paul McNutt as the first American ambassador to the Republic of the Philippines. For over seven decades, Wash was a trusted advisor on business, economic development, and matters of strategic consequence linking America to the Asia-Pacific region. It is safe to say that Wash was the first person people would turn to in Philippine leadership circles for guidance on national and international business relationships.

As ambassadors came and went, Wash offered continuity and a perspective nurtured by a keen insight into human events along with a wide and growing network of leaders inside the Philippines, the U.S., throughout Asia, and the world. During my posting to the Philippines, I especially valued Wash’s openness, reliability, good sense, knack for conveying important messages succinctly, and genuine interest in sustaining strong bilateral ties between America and the Philippines.

Although never in government, Wash was the ultimate insider, who carried out an incredibly important role in national and international affairs that spanned a majority of the 20th century and well into the first two decades of this century.  It is almost surreal to think that the man who counseled American ambassadors in the 1940s, served as a valued confidant to our current ambassador Sung Kim 70 years later.

Of course, putting on another hat, I am also privileged to represent the US-Philippines Society this evening. My colleague Ambassador Tom Hubbard, whose wife Joan is here, recalls a story about Wash’s central role in the Society’s founding. Tom was in Manila in 2011, the year Wash turned 90, and along with others, including former Foreign Secretary Roberto Romulo, had a vision for organizing a US-Philippines Society. In floating the idea in Manila, including with then Finance Secretary Cesar Purisima, Tom received a uniform response: “Talk to Wash.” Tom did, and Wash responded, “Good idea; do it.” We were delighted that Wash agreed to serve as the Society’s honorary chair together with Hank Greenberg, who we will hear from later by video.

Wash’s association with the Society was much more than honorary. He actively participated in board meetings, consistently advocating for greater American business engagement in the new and dynamic Philippine economy. He even joined us on a hurried trip to Davao in June 2016 to meet then President-elect Duterte a week prior to the inauguration. After the meeting finally began at 5:30pm, I recall Wash waiting patiently before taking the opportunity to encourage the new president to support rational family planning policies. Wash extended three fingers in the air in the president-elect’s direction and said, “three should be on a new bumper-sticker; three children only.” Seems Wash seldom missed an opportunity to make a point on issues of concern to him.

The US-Philippines Society misses him indeed, and we owe a debt of gratitude to Wash SyCip.

As Ambassador Romualdez told me last month, the Society plays a vital role in sustaining and strengthening ties between the Philippines and the United States across the board, even as administrations change in Washington and Manila. Mr. Ambassador, I suspect that Wash is in total agreement and was very happy to hear you say that.

It is said that the way you live your life is your message to the world, so make it inspiring. I cannot think of anyone who inspired so many, so effectively, over such a long period as Wash SyCip. Thank you.

Washington SyCip Remembrance: Remarks on the links between Mr. SyCip and the metro DC area