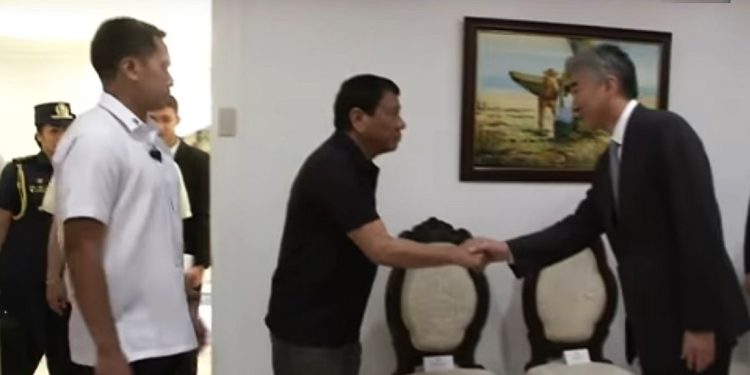 Meeting with the United States of America Ambassador to the Philippines on March 27, 2017. Image from the video of RTVM, Presidential Communications Office
FacebookTwitterLinkedinMix

DAVAO, March 28, 2017 — According to the press-release published by the U.S. Embassy in the Philippines, “Ambassador Sung Y. Kim traveled to Davao on March 27. While in Davao, the Ambassador had a friendly, productive meeting with President Duterte. They discussed the extensive ‎bilateral partnership over the years as well as cooperation on counterterrorism, child protection, piracy, and economic development in Mindanao. The Ambassador highlighted U.S.-Philippine partnerships in the region that strengthen the local economy and promote peace and stability.

Overall, the U.S. government has pledged more than Php3.5 billion for dozens of projects in Mindanao over the next few years, including the Roll-on, Roll-off, or RO-RO, nautical highway. On April 30, the route will connect the cities of Davao and General Santos to Bitung in the Sulawesi Island of Indonesia. This accomplishment will help U.S. and Philippine businesses operating in Mindanao increase their exports at great savings.

The Ambassador also shared a few concrete examples of the close business ties between U.S. companies and Mindanao. Demand from U.S. clients generates an estimated 40,000 well-paying BPO jobs in Mindanao. Cargill, a U.S. agricultural corporation, exports Php7.5 billion worth of coconut oil every year, much of which comes from Mindanao, supporting tens of thousands of Mindanao farmers. Together with its partners GIZ and BASF, Cargill has trained more than 1,000 coconut farmers since 2011 on improving agricultural practices. As a result, 300 small farmers from the region have been certified to produce the world’s first Rainforest Alliance certified copra, raising their incomes by 15 percent.”