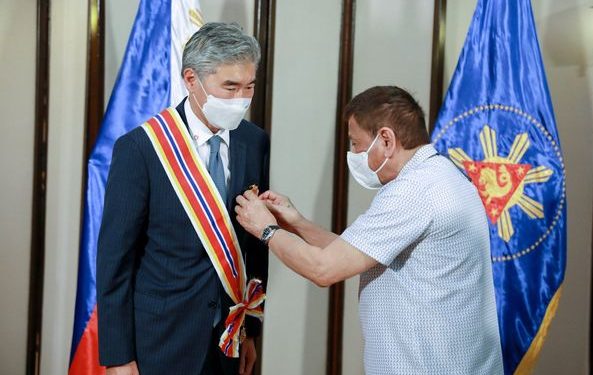 STATEMENT FROM THE OFFICE OF THE PRESIDENT OF THE PHILIPPINES

President Rodrigo Roa Duterte congratulated H.E. Sung Y. Kim, outgoing Ambassador Extraordinary and Plenipotentiary of the United States of America, on a successful tour of duty in the Philippines during the latter’s farewell call on 7 September 2020.

The President expressed appreciation for Ambassador Kim’s vital contributions in strengthening the alliance and partnership between the Philippines and the United States.

President Duterte conferred on Ambassador Kim the Order of Sikatuna, with the rank of Datu (Grand Cross), Gold Distinction.

During Ambassador Kim’s almost four-year stint in Manila, Philippines-US relations marked important milestones, particularly the historic return of the Balangiga Bells to the Diocese of Borongan, Eastern Samar in December 2018.

Cooperation in various areas of shared interest, especially in defense and security, trade and investments, and people-to-people exchanges likewise expanded.

For his part, Ambassador Kim thanked the President for a productive bilateral engagement with the Philippines. He emphasized that the US remains committed to the alliance and partnership with the Philippines that are based on shared values and meaningful history.

The Enduring Partnership of PH and US: Working together to defeat COVID-19