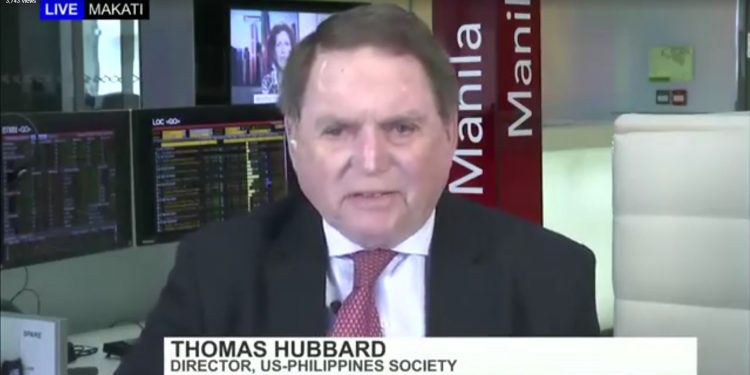 PHILIPPINES – In his February 22 interview with Bloomberg TV Philippines, Director of the Board of the U.S.-Philippines Society and former U.S. Ambassador to the Philippines Thomas Hubbard reaffirmed the importance of Philippine-American ties.

On February 20-23, the US-Philippines Society’s Society held a three-day program in the Philippines. The meeting of the Society’s Directors of the Board takes place annually in Manila, and is designed to foster continued engagement in trade, investment and support people to people ties.

While speaking about the key priorities of the U.S.-Philippines Society on sustaining bilateral relations under the Trump and Duterte administrations, Ambassador Hubbard stressed that the purpose of the Society is to “highlight for the publics and the government officials in both the U.S. and the Philippines the importance of the relationship between two our countries.”

“We had some very good meeting here in Manila, a very long meeting with President Duterte. We met with all the economic cabinet members, we’ve also met with business leaders, and I think I can go back to my American colleagues, go back to the U.S. and give a better picture of what the Philippines looks like today and what the opportunities are for American business,” – said Ambassador Hubbard.

With regard to the emerging opportunities and lingering issues that raise concern among American investors, Mr. Hubbard stated that it was too early to draw conclusions: “I think we don’t have yet a clear view of President Trump’s approach to trade and to Asia. But I do think the Philippines is now and will continue to be a very important country of interest to American business both in terms of trade and investment.”

Speaking about a possible free trade agreement after TPP, Ambassador Hubbard did not exclude the possibility of multilateral trade agreements with the U.S.

“President Trump has indicated a strong preference for bilateral agreements over multilateral agreements. I am not sure he has addressed yet the question of ASEAN and how to deal with ASEAN. For the moment he has been focusing on some of the big bilateral trading partners like the UK and Japan.  I do think there will be room for multilateral or bilateral trade agreements with individual ASEAN countries under this administration,” – said Hubbard during the interview with Bloomberg Philippines.

While prospects of developing business ties between the U.S. and the Philippines remain promising, Ambassador Hubbard did comment on the concerns about the due process in the mining sector of the Philippine economy:

“As many of our business members of the U.S.-Philippines Society pointed out yesterday, the sanctity of contracts is a very key issue for them. I don’t know if there is a large number of American companies involved in mining in the Philippines. I am not sure if that would have a direct impact but we do have companies that have run into issues involving the implementation of their contracts, and from what we heard from the senior Philippine officials yesterday, we believe that this is important for the Philippines government as well.”

Thomas Hubbard served as the U.S. Ambassador to the Philippines from 1996 to 2000. He has visited the country regularly since, and has noted enormous progress over the years.

“I know there are still issues relating to the distribution of income in the country, to lowering the rate of poverty and ensuring that all the Filipinos will benefit from the progress. That is clearly a top priority for your president in the Philippines, and for senior cabinet officials. One of the key points that President Duterte made was that he is against corruption. He sees that as one of his highest priorities, and we welcome that,”– said Ambassador Thomas Hubbard.