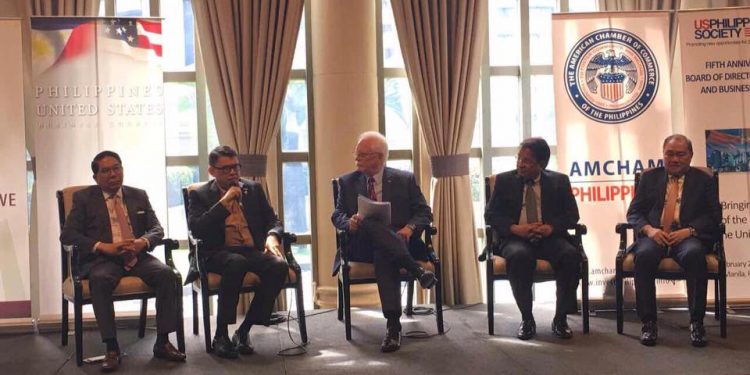 The US-Philippines Society said yesterday that as a sign of stronger relations, a free trade agreement (FTA) between the United States and the Philippines is possible but largely uncertain due to the change in leadership in both countries.

What is being considered is an FTA between US and Asean, of which the Philippines is a member, but was earlier rejected.

American businesses are also seeking assurance of policy consistency in the Philippines specially on  constitutional change, foreign ownership and taxation, according to John Maisto, USPS president.

John Negroponte, who co-chairs the USPS with the Philippines’ Manuel Pangilinan, said at the Makati Business Club forum yesterday that the planned FTA could be in the context of a US-Asean pact.

“That might be an idea that could get revived… (it) shouldn’t be discarded. It’s a possibility,” Negroponte said, adding that could be bilateral in nature as Asean is now viewed as one unit.

Thomas Hubbard, former ambassador to the Philippines, for his part said the US opts for multilateral channel but it withdrew from the Trans-Pacific Partnership where smaller countries like the Philippines could have been folded in.

Both Negroponte and Hubbard agree the US, like the Philippines, are in a period of transition which makes the political and economic policies still a “work in progress”, blurring chances of an FTA.

The USPS delegation, on a three-day mission in the country ending February 22 as it marks its fifth year, met with President Duterte and his economic team as well as members of the legislative body to discuss, among other things, the priorities of the Philippine government.

Negroponte said economic team lead Carlos Dominguez, finance secretary, raised the concern of some sectors about the perception that the US might be turning inward, to which the former US envoy to the Philippines said: “I would point as of this time some of these policies whether trade or migration are work in progress.”

Maisto said the meeting with the economic team was an occasion to elaborate on where the Duterte administration vis-à-vis Congress “hope to go on the subject of foreign investment.”

“The investment community looks for assurance that contracts will be fulfilled… that there is predictability,” Maisto said.

The USPS was scheduled to hold a board meeting yesterday where they would lay down their priorities for the year.

The society’s bi-national board includes some 30 private sector and civic leaders who will meet to review and look for ways to strengthen private sector and official relations during a period of political transitions in both countries.

“This board meeting is being held at a fortuitous moment, as both countries go through their respective political transitions. We will explore opportunities for the society to pursue its mission of strengthening ties between our two countries under these new circumstances,” Pangilinan said.

As an independent, non-partisan organization, the society plays an important role in fostering mutual understanding of the dynamics underpinning the longstanding US-Philippines relationship.

The US is the third biggest trading partner of the Philippines and is its second largest source of investment.

From January to November 2016, the Philippines exported $8 billion worth of products to the US while importing $7.2 billion from that country, or a surplus of $800 million.