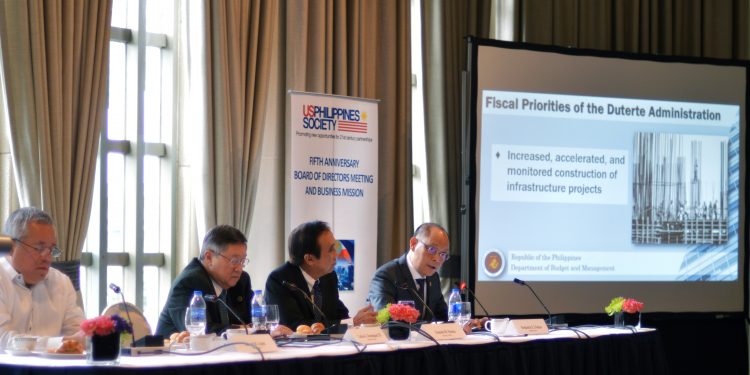 Sec. Diokno presented the budget process and the priorities of the Duterte administration for the next six years.  “We are focusing on the increased and accelerated nationwide construction of infrastructure projects that will spur economic growth and alleviate the traffic congestion in our major cities,” he said.

The government has allotted for nationwide infrastructure projects a total of P847.2B, 13.8% higher than in 2016.  Secretary Diokno said the government will continue and intensify the construction projects across the country through geo-tagging 24/7 to fast track implementation.

He also shared the Administration will strengthen ties with neighboring countries such as China and Japan and raise more funds to support the big ticket projects. “To date, we estimate that the Duterte Administration has already raised close to P1 trillion in Official Development Assistance (ODA), primarily from China and Japan,” he added.

Meanwhile, 40 per cent of the 2017 budget is allotted to social services- healthcare, education, social protection, socialized housing, among others.  Currently, it is 8.5 per cent of GDP and will rise yearly up to 9.2 percent in 2022.

The national government will continue looking at borrowing from the local debt market with an 80-20 mix. “Revenue effort as per cent of GDP is projected to increase from 15.3 per cent this year to 17.7 per cent in 2022, including revenue measures being proposed by the Department of Finance,” Secretary Diokno said.

He also said the Duterte Administration reaffirmed its commitment to the Open Government Partnership and the Global Initiative for Fiscal Transparency to continue, expand, and institutionalize participative governance reform initiatives.

Source: Department of Budget and Management of the Republic of the Philippines

US Ambassador Sung Y. Kim: speaking at the Romulo Cafe