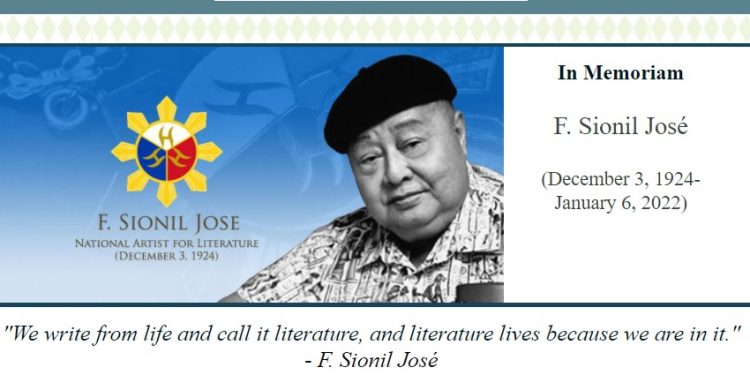 The US-Philippines Society joins Filipinos, Americans and the global literary community in mourning the passing of 2001 Philippine National Artist for Literature, Francisco Sionil “Frankie” José, age 97, on Thursday, January 6. A nationalist and prolific writer, he was known for his five-novel epic “The Rosales Sage,” consisting of The Pretenders, Tree, My Brother, My Executioner, Mass, and Po-on, that narrates the saga of four-generation family set around Philippine history, 1872-1972, from the late Spanish colonial period up to martial law. It has been described as “an allegory for the Filipino in search of an identity.” He has written over 35 publications – novels, short stories, anthologies, essays and opinions. His works have been translated into 28 languages. Even in his nineties, he was relentless in writing against social injustice and advocated for Filipino nationalism. In December 2014, the F. Sionil José Youth Writers’ Award was launched to honor his legacy and “advance excellence, integrity, social justice and love of country in literature.”

Frankie José studied at the College of Philosophy and Letters University of Santo Tomas, Manila, 1946-1948. From 1948-1949, José was Assistant Editor of the U.S. Information Service in Manila. He received numerous fellowships including the U.S. Department of State, Smith-Mundt Leader Grant, 1955; the Asia Foundation Grant (United States and Southeast Asia), 1960; Rockefeller Foundation Writing Fellowship, 1979 and 1993. At Stanford University, he was Writer-in-Residence, Division of Literatures, Cultures, April- May, 2005.

In 1965, José and his wife, Teresita Jovellanos José, founded the Solidaridad Publishing House and “Solidaridad” Bookshop in Manila. From 1966-1996, he was publisher and editor of “Solidarity,” a mix of literature, current affairs and policy analysis about the Philippines and Asia. Many American diplomats and expats frequented the bookshop, a cultural landmark known to foreign press as “best little bookstore in Asia.”

Following his 1991 visit with F. Sionil José in the Ilocos region where he was born, the Atlantic contributing writer, James Fallows, lamented that “America really has no counterpart to José—no one who is simultaneously a prolific novelist, a social and political organizer, an editor and journalist, and a small scale entrepreneur.”

Frankie José had unique ties to America and deep understanding of Americans and American culture—and idiosyncrasies. They stemmed from his wide contacts with Americans throughout his writing career, links to US universities, travel, and through “Solidaridad,” the legendary bookstore/publishing house in Ermita that drew so many American visitors. His American connection flowered through his and Tessie’s seven children who settled in the United States.

Society President John Maisto fondly recalled his friendship with Frankie that began in the early 1980s during his diplomatic posting in Manila. It continued over the years as part of regular visits to the Philippines and required stops at Solidaridad. The last one was in early 2020, just pre-Covid, a three and a half hour lunch with Frankie and Tessie in their home above the bookstore (the only property he ever owned, he remarked).

“We talked, as we did over the years, politics and Philippine realities, personalities, the dictatorship era and afterwards, the current issues, regional and world affairs, and of course, the United States—with lots of penetrating questions,” Amb Maisto stated.

Frankie Sionil José is much more than the National Artist for Literature of the Philippines. He is also the Philippines National Treasure. We will not have him with us now, but we will have his literary legacy, must reading for all who want to understand the Philippines.

José and his wife, Teresita have five sons and two daughters,11 grandchildren and four great grandchildren. Funeral arrangements and a state ceremony to be announced.