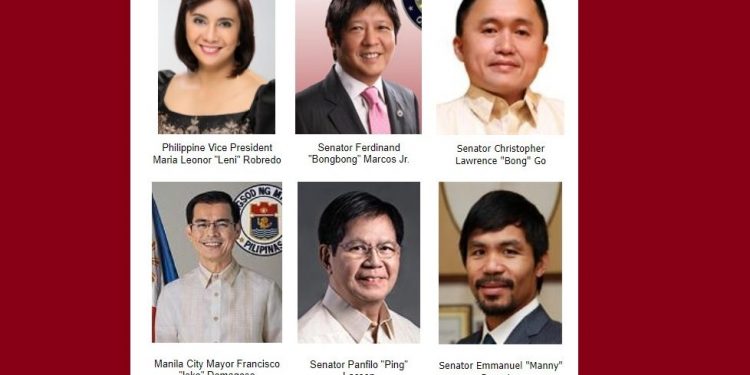 At the invitation of the Southeast Asia League of Students (SEALS), the US-Philippines Society held a roundtable discussion on the May 2022 Philippine presidential elections at the Johns Hopkins University’s Rome Auditorium on November 17.

Society Executive Director Hank Hendrickson provided an overview of the political landscape followed by Director Henry B. Howard with an “off-the-record insider’s view” of where the campaign is headed. USPHS President John F. Maisto offered closing remarks and a veteran’s observations on the election. The program was moderated by Professor William Wise, who heads the Southeast Asia Forum at the Stimson Center. We are sharing below part of the program’s scene-setter.

The Philippines has been described as “an Asian Bastion of Democracy.” If that’s indeed the case, then Philippine elections matter, have consequences, and set conditions for effective representative governance.

Filipinos express themselves as a hopeful and resilient people. Think of the scenes of determined faces meeting incredible hardship during the recovery from Typhoon Haiyan in 2013, the most powerful tropical storm to make landfall in recorded history, or the iconic photos of Filipinos during the 1986 EDSA People Power revolution that restored democracy to the country.

Family ties and loyalties are fundamental pillars of life in the Philippines. Festivals, rituals, and the fervor of religious observances bring families and communities together. The marked cultural trait of “utang ng loob” or debt of gratitude is embedded in personal relationships, especially in the vertical ordering of society — older to younger, privileged to those less so.

By many measures, women enjoy an elevated status in the Philippines, with examples of prominent women occupying key official positions, from the presidency to senior posts in the legislature, judiciary and local government, as well as heading major business enterprises.

Philippine civil society, especially since EDSA, has emerged as among the most energetic in the world, drawing passionate advocates to local and national causes on issues ranging from environmental protection to poverty reduction, along with some that are more overtly political.

Filipinos have been quick to gravitate to modern technologies, with a high proportion of the population on social media, a trend accelerated during the virtual world of the Pandemic since early 2020.

Filipinos have adapted to the global labor market and form a sizable diaspora with around ten percent of the population working and living overseas. Remittances from overseas workers account for almost ten percent of the country’s GDP.

The Philippines can be a violent place. Threats to personal security, especially in densely populated urban areas, led to grudging public acceptance of measures to “make the streets safer” for residents. The organization “Reporters without Borders” ranked the Philippines as the deadliest country for journalists in Asia. Despite pressures, the Philippines continues to boast a lively press and values open discussion.

All these factors, and more, will come into play throughout the vibrancy of the Philippine election season through next May.

• Skilled use of modern technologies,

• Festival atmosphere on the campaign trail (with gifts often expected),

• Role of women and advocates within civil society,

• Votes and influence of the diaspora,

• The press as a shaper of political opinion and responder to both incentives and pressures from political machines.

A review of press coverage and opinions from across the spectrum in these early days shows a focus on candidates filing for positions of President, Vice President and the senate. And, what changes might emerge during the month-long “substitution” period that ended this week, during which contenders can opt to substitute for an early-filing party place-holder. Note that the President and Vice President are voted upon separately. What has emerged is a field of 5 or 6 serious presidential candidates, plus several VP possibilities.

What has not been part of the news coverage is questioning about the election itself. That this is now taken for granted represents a sign of stability and maturity, as well as evidence that a vast majority of Filipinos accept the election process as a means of determining political leadership – in contrast to other systems in the region where the will of party plenums or military establishments can play the decisive role in government formation and leadership selection.

A few other facts before we move into the specifics of how the 2022 contest is shaping up. At stake are over 18,000 government posts including the presidency, vice presidency, half of the 24-member senate, and more than 300 House seats, along with provincial and local offices. There are over 55 million registered voters. Youths or millennials (aged 18-30) compose 40% of registered voters. Turnout is normally high, in the range of 75% (compared to 50-60% in the U.S., for example).

Political parties in the Philippines play a subordinate role to political leadership. An election winner with a mandate to govern can expect party-switching by members of the legislature to align with new realities. One observer described parties as “like water – fluid and easily following any shape.”

So-called dynasties, political family connections, and celebrity status have long been a feature of Philippine politics. These groupings can have regional bases – the Marcoses in the North (Ferdinand Jr. is emerging as a leading presidential contender – we can discuss why, and how today’s voting public has come to assess the 20-year presidency of Ferdinand Marcos, Sr.). The Aquino family produced two presidents following the assassination of opposition leader Benigno Aquino in 1983. The Macapagal family produced a father and daughter presidency, with Diosdado and Gloria Macapagal Arroyo.

Celebrity status propelled movie star Joseph “Erap” Estrada to the presidency and has led boxing legend Manny Pacquiao to seek the office in 2022.

Issues in the current campaign will be familiar, but with a new focus on combatting Covid and restoring jobs and the economy. Those lined up with the incumbents will commit to protecting citizen security and reach for mass appeal. The opposition, led this time by Vice President Leni Robredo, will cast this election as a contest between the preservation of democracy and the threat of democratic decline. Others may try to navigate a middle ground.

Covid restrictions will impinge on the traditional styles of campaigning, with more reliance on an ability to reach voters virtually, giving candidates with the best social media operations and troll armies an edge. Celebrity candidates may not prosper as well in this environment, as evidenced thus far in Pacquiao’s lagging poll numbers.

Finally, in terms of foreign affairs, the United States is not likely to come up for much debate in the campaign. But, China will be part of the discussion, especially over the issue of how the government can best defend Philippine interests in the South China Sea.

Director Henry Howard provided the audience with an “insider’s guide” to the presidential candidates analyzing historical electoral data and trends, and regional identities. Portions of that presentation were off-the-record.

The discussion period examined more closely the tickets at this early stage, and addressed what might be at stake in the coming election for the Philippines and key international relationships.