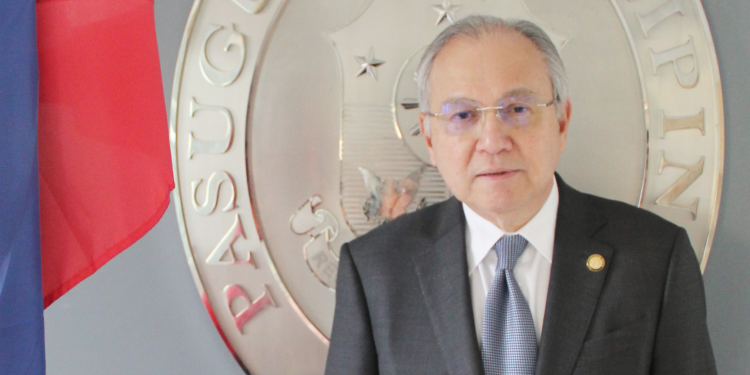 H.E. JOSE MANUEL G. ROMUALDEZ Ambassador of the Republic of the Philippines to the United States of America
FacebookTwitterLinkedinMix

The US-Philippines Society joins in saluting Ambassador Jose Manuel Romualdez and Consul Katrina Isabelle Borja-Martin for their commitment to and effective work in strengthening the US-Philippines relationship amid so many real-world challenges.

WASHINGTON, D.C. – Philippine President Rodrigo Roa Duterte decorated Philippine Ambassador to the US Jose Romualdez with the Order of Sikatuna, Rank of Datu, Gold Distinction, and awarded the Embassy’s former First Secretary and Consul Ms. Katrina Isabelle Borja-Martin with the Gawad Mabini, with the Rank of Dakilang Kasugo (Commander), for their efforts in strengthening the long-standing comprehensive and thriving ties between the Philippines and the United States of America.

The Order of Sikatuna and Gawad Mabini are two of the highest Presidential awards given in recognition of the awardee’s exemplary service to the people and nation. The Order of Sikatuna is an order of diplomatic merit conferred upon individuals who have rendered exceptional and meritorious services to the Republic of the Philippines, while the Gawad Mabini is conferred on Filipinos who have rendered distinguished foreign service, or helped promote the interests and prestige of the Philippines abroad.

While serving as Philippine envoy, Ambassador Romualdez “further deepened the Philippines’ US alliance through the enhanced defense and security cooperation, particularly in maritime security and the upgrading of Philippine defense capabilities and promoted trade and investment, resulting in the recent entry into the Philippines of US base SBA Communications, thereby advancing the development of the country’s telecommunications technology backbone. He also played a lead role in the procurement of 20 million doses of Moderna Covid-19 vaccine significantly contributing to the government’s pandemic response efforts.”

The Ambassador virtually joined the conferment ceremony held in Malacanang Palace, Manila from Washington, D.C., US. The Embassy’s former Minister and Consul, Mr. Gunther Sales, accepted the award on his behalf.

The Embassy’s former Economic Section Head, Ms. Katrina Isabelle Borja-Martin, personally accepted her Gawad Mabini from President Duterte for her “distinct accomplishments as First Secretary and Consul of the Philippine Embassy of Washington D.C.; for her exemplary dedication in serving the interest of Filipinos within her jurisdiction; for her laudable efforts in negotiating vaccine supply for the Philippines, reaching out to various pharmaceutical developers to give the Filipino people diversified vaccine options; for facilitating SBA Communications’ application to register as an independent power company, bringing investment to, and generating employment in the Philippines; and for advancing the national interest and promoting mutually beneficial cooperation between the Philippines and the United States of America.