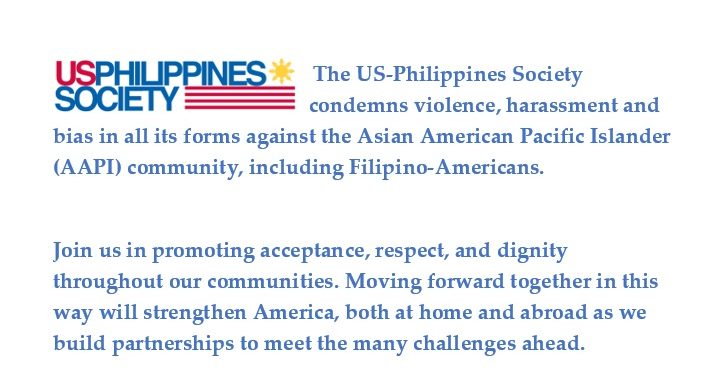 a virtual forum on

Combating anti-Asian Violence in the U.S. and Beyond

The shooting of eight persons in Atlanta last month and attacks in New York City brought to the surface long-simmering concerns about violence directed against Asian-Americans. In response, last Friday, the U.S. Senate passed the COVID-19 Hate Crimes Act to combat the rise in violence. After initial expressions of dismay and disgust at these and other hate crimes, discussion is turning to the sources of anti-Asian attitudes and actions, awareness of the contributions of Asians to American life and culture, and the individual and societal effects of discrimination and harassment. This seminar will explore these questions and consider pragmatic policy solutions needed to prevent hatred and violence against Asian-Americans. Stimson Center’s Southeast Asia Forum Chair William M. Wise will moderate the program.

H.E. JOSE MANUEL G. ROMUALDEZ
Ambassador of the Republic of the Philippines to the United States

Jose Manuel “Babe” del Gallego Romualdez was appointed Ambassador of the Republic of the Philippines to the United States of America in July 2017 by President Rodrigo Roa Duterte. On 29 November 2017, he presented his credentials to US President Donald J. Trump and formally assumed office as Ambassador Extraordinary and Plenipotentiary. Additionally, as the head of the Philippine Embassy in Washington, D.C., Ambassador Romualdez is concurrently the Philippines’ emissary to the Commonwealth of Jamaica, Republic of Haiti; Republic of Trinidad and Tobago; Antigua and Barbuda; Bahamas; Barbados; Dominica; Saint Kitts and Nevis; Saint Vincent and the Grenadines; and Saint Lucia.

Prior to his appointment, Ambassador Romualdez was designated as a special envoy of the Philippine President to the United States. He also served as a member of several Philippine business delegations visiting the United States, China, Japan and New Zealand from 1989 to 2012.

Ambassador Romualdez has extensive experience as a media practitioner and business executive. He used to be the Chief Executive Officer of Stargate Media Corporation and Publisher of People Asia Magazine (The Philippine Star affiliate). He was president of the Manila Overseas Press Club and vice-president of Rotary Club of Manila.

Ambassador Romualdez writes columns for The Philippine Star. All his columns have a wide following of readers both in the Philippines and abroad.

Born and raised in Manila, Ambassador Romualdez received a Bachelor of Science degree in Business Administration from De La Salle College in 1970. He plays golf as a pastime and is affiliated with Manila Golf and Country Club and the Manila Polo Club.

Susan has been a leader in passing landmark laws to fight domestic violence, human and labor trafficking, child and senior abuse, sexual assault, hate crimes, home invasions, crimes against immigrants, gun violence, pay inequity, identity theft, cybercrimes, and online fraud and to support education, civil rights, telehealth, privacy rights, cybersecurity and bioscience. She authored and led passage of the Maryland Equal Pay for Equal Work Act, one of the strongest pay equity laws in the country, Anti-Exploitation Act, laws to fight threats of mass violence and terror against schools, places of worship and other places; the True Freedom Act to help human trafficking victims escape trafficking; and number of laws to protect victims of domestic violence and child predators.

Susan led passage of a law to require Background Checks on the sale of long guns and shot guns by private and unlicensed dealers to prevent those banned from having those guns go around the law and commit violence crimes. Although the bill was vetoed by the Governor, the Maryland General Assembly overrode his veto this year.

This year, she authored and led passage of bills to fight Ransomware and to help localities proactively develop cybersecurity strategies and programs to deter and fight serious cyberattacks that can paralyze and shut down our government, economy, hospitals, and critical infrastructures. Susan is the recipient of awards by Maryland Network Against Domestic Violence, Maryland Legislative Agenda for Women, Maryland Women’s Law Center, Baltimore Child Abuse Center, Organization of Chinese Americans, Korean Community Service Center, Progressive Maryland, Equality Maryland, Maryland’s 100 Women, and many other groups.

Theodore S. Gonzalves, Ph.D., is a scholar of comparative cultural studies. He has taught in the United States (California, the District of Columbia, Hawai’i, and Maryland), Spain, and the Philippines.

Dr. Gonzalves’ publications include Stage Presence: Conversations with Filipino American Performing Artists (2007), The Day the Dancers Stayed: Performing in the Filipino/American Diaspora (2009), Carlos Villa and the Integrity of Spaces (2011), and, with Roderick Labrador, Filipinos in Hawaiʻi (2011).

A member of several academic journal editorial boards, he is a founding editorial board member of Alon: Journal for Filipinx American and Diasporic Studies. Generous support for Dr. Gonzalves’ work includes recognition as a Fulbright Scholar to the Philippines, a Moeson fellow at the Library of Congress, and a senior fellow at the Smithsonian. He served as the twenty-first president of the Association for Asian American Studies.

Dr. Gonzalves is curator at the Smithsonian Institution’s National Museum of American History and is currently serving as the Interim Director of the Smithsonian Asian Pacific American Center. He lives in Washington, D.C.