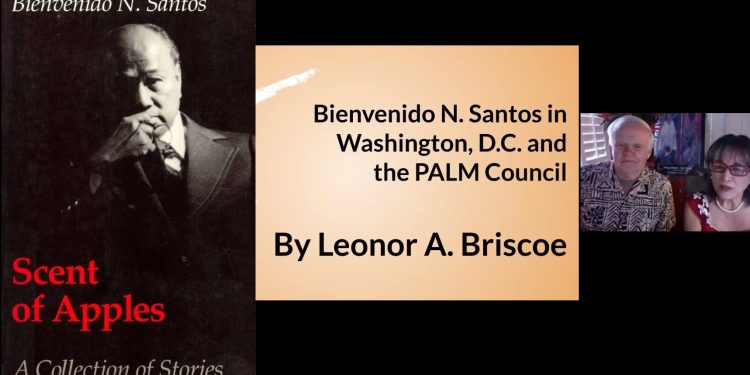 Image of the Book cover "Scent of Apples" and Featured Presenter Leonor Briscoe alongside her husband David Briscoe during the virtual program.
FacebookTwitterLinkedinMix

At a September 24 virtual event, journalist and writer Leonor “Noree” Briscoe offered insights into the personal and professional life including writing techniques employed by one of Philippines’ most prolific and distinguished literary artists, Bienvenido N. Santos (1911-1996). They had first met in 1965, collaborated on projects including the PALM Council Short Stories Contest held in Washington DC. Noree revealed segments of manuscripts “So Many Places” that would have been Ben Santos’ last novel project.

“Scent of Apples, A Collection of Stories” (University of Washington Press, 1980) by Ben Santos was his first publication appearing in the U.S. An anthology, it captured the essence of being a Filipino American who had longed for his homeland yet drawn to the promise of attaining the American dream. Focusing on the struggles of his characters, Ben Santos masterfully writes about kindred spirits in the “Immigration Blues” and “Manila House.” In October 2016, the Manila House on 24th and K Streets, Washington, D.C., was designated a literary landmark by the American Library Association (ALA) in honor of Mr. Santos.

During the war (1942-1945) Ben Santos was assistant to Carlos P. Romulo, Secretary of Information and Public Relations under the Philippine government in exile. They held office in the Old Chancery located on 1617 Massachusetts Ave, Washington DC.

To this day, his writings on love, loneliness and bittersweet yearning for the Philippines  inspire a generation of young writers trying to find their voice in the United States. 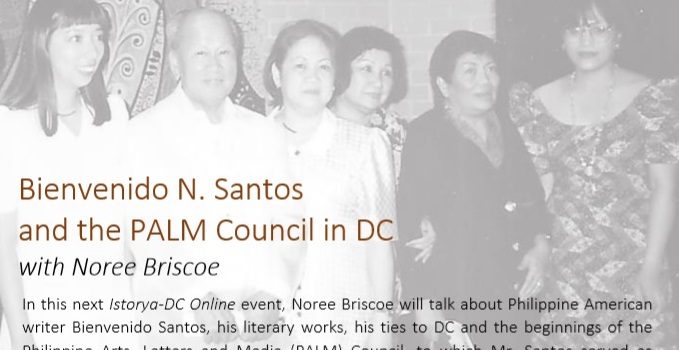