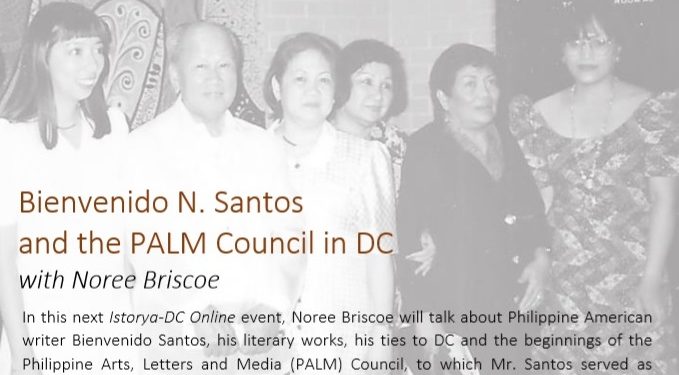 In this next Istorya-DC Online event, Noree Briscoe will talk about Philippine American writer Bienvenido Santos, his literary works, his ties to DC and the beginnings of the Philippine Arts, Letters and Media (PALM) Council, to which Mr. Santos served as founding Adviser.

Leonor (Noree) Aureus Briscoe is a retired journalist, writer, and editor based in Hawaii. She has edited several volumes, including a collection of Philippine American short stories; a two-volume anthology, Philippine Press Under Siege (National Press Club and Committee to Protect Writers, 1984); and Ben on Ben: Conversations with Bienvenido Santos (Anvil, 2011).

Noree is a former D.C. resident and first president of the PALM Council. She served as Ben Santos’s editor and literary agent during a time when he spent considerable time in the U.S. She contributed a chapter on Mr. Santos in The Columbia Companion to the Twentieth-Century American Short Story (Columbia University Press, 2004.)

To join this live program, please register at https://bensantos.eventbrite.com

This event ISTORYA DC ONLINE is co-sponsored by RMC Foundation, the PALM Council, the Philippines on the Potomac Project (POPDC), Sentro Rizal Washington DC, and the US-Philippines Society.