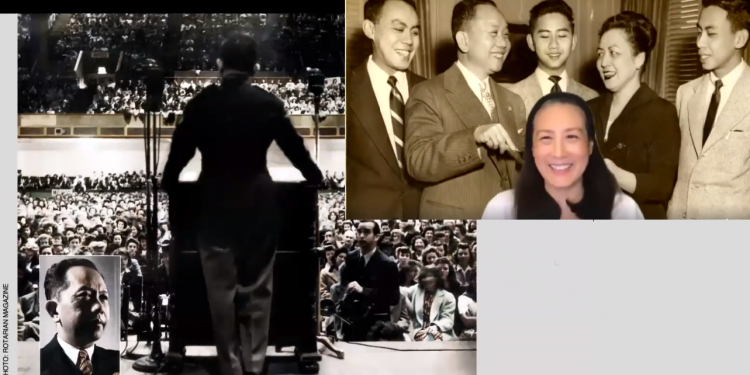 At an August 17 Istorya DC virtual program, featured speaker and archivist of Carlos P. Romulo Foundation for Peace and Development Liana Romulo provided an overview of the life and times of her grandfather Carlos P. Romulo (1898-1985). She traced her grandfather’s early visits to Washington DC as a student (1921), coach of a debating team for granting of Philippine independence (1928), member of the Philippine Independence Missions (1922-1933) and later as Resident Commissioner of the Philippine Commonwealth (1944-1946).

During the war (1942-1944), Carlos Romulo held speaking tours transiting mostly by train over 89,000 miles to reach 466 U.S. cities “vividly depicting wartime Philippines,” stated Liana Romulo. He had embarked on “a mission to beat the drum to raise awareness and shake Americans out of complacency while soldiers languished in internment camps in the Philippines,” she added.

From the Old Chancery building in Washington DC, Resident Commissioner Carlos Romulo led a public campaign about the living conditions and rehabilitation in war-torn Philippines having witnessed the month-long Battle of Manila that killed over 200,000 civilians and wrought devastation to a once glorious city.

July 4, 1946 marked the granting of full independence of the Philippines. President Manuel Roxas was sworn-in as the first president of the Republic. The Romulo family reunited after the war and returned to Washington DC. General and Mrs. Romulo and their four sons lived in a house along the Embassy Row.

In October 1949, General Carlos P. Romulo was elected as the fourth President of the United Nations General Assembly in New York City. He was also a member of the UN Human Rights Commission chaired by Eleanor Roosevelt. Representing the Philippine Commonwealth, General Romulo  had co-signed and co-founded the United Nations Charter in 1945. The UN Charter was established post WWII to maintain international peace and security through cooperation among member states. A towering figure at the UN, Romulo spoke for small emerging nations in Asia and Africa.

The legacy of General Romulo, a public servant under eight presidents, is enshrined in a permanent exhibit inaugurated on January 18, 2020 at the De La Salle University. Moreover, “his spirit of nationalism is embodied in every proud Filipino,” Liana contends. Ambassador Roberto Romulo, Liana’s father and Founding Director of the US-Philippines Society further elaborated by citing the sense of duty and pride in performing quality care exhibited by overseas Filipinos working the frontlines during the pandemic.

In his concluding remarks, Society President Ambassador John F. Maisto recognized General Romulo’s qualities as a great Filipino. As a Georgetown University student, Maisto had heard the eloquent speaker discuss preeminent issues and a backdrop – his views of the Philippines and the U.S. He had met him again while assigned as US Embassy Manila’s Political Officer to discuss cooperation and shared responsibilities among Southeast Asia nations. General Romulo offered to establish refugee processing centers in the Philippines for Indo-Chinese refugees seeking asylum.

Great Decisions Speaker Hank Hendrickson on "The Philippines and the U.S."