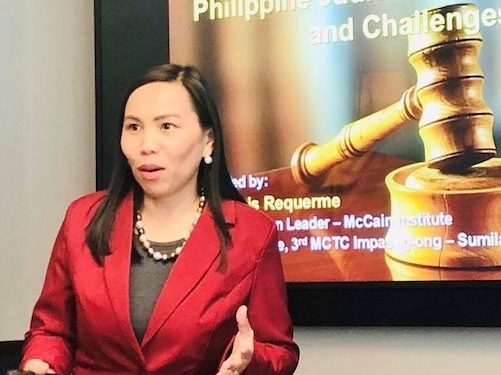 In observance of Women’s Month in March, the US-Philippines Society is delighted to share the perspective of Judge Jerlie Requerme of Mindanao who is currently in the United States as part of an exchange program sponsored by the McCain Institute for International Leadership of Arizona State University and the National Center for the State Courts in Metro Washington DC.

Judge Requerme looks at legal and social aspects of gender equity in the Philippines and shares her own professional and family experiences with us. Thanks Judge Jerlie!

The Philippines is among the few countries in the world with a specific constitutional provision for women[1]. From the first suffrage bill for women in 1907 to its legalization 30 years after, women in the Philippines have indeed come a long way today. According to the World Economic Forum Global Gender Gap Report 2020[2], even if the country slid from 8th to 16th rank, the Philippines remained the most gender-equal country in Asia.[3]

From the Magna Carta of Women[4] a comprehensive women’s human rights law that seeks to eliminate all forms of discrimination against Filipino women to the newly approved 105-Day Expanded Maternity Leave Law [5], the country has been at the forefront of women’s rights movements not only in Asia but in the world. We already have 2 women presidents, women chief justices, women legislators, women judges and lawyers, women in law enforcement, women business leaders and practically in all sectors and professions.

Women in the judiciary have also been steadily increasing. I have been a lawyer since 2003 and have been a judge for more than six years now. In a traditionally male dominated world, women have earned their place in the legal profession. Though gender parity is still a long way, we are slowly veering away from the archaic mentality that the role of women is “just“ to be a home-maker. Though we do not discount the hard work associated with tending the home as it is a 24/7 job with no rest days and leave benefits, women now are seen as equal partners in the family’s decision-making. Laws and jurisprudence have now protected women even in marriage as the case of a woman accused of parricide but was able to avail of the benefits of a “Battered Woman Syndrome” (People vs. Marivic Genosa) [6] or a wife winning against a case of marital rape against her husband (People vs. Edwin Jumawan).[7]

On a personal level, I had always been fortunate to be celebrated, recognized, valued and appreciated as a woman. Though in a still conservative and traditional Filipino culture where women are judged by their home making skills, my lack of cooking prowess is not an issue in our household (though my sons would joke about it sometimes but they are educated that the value of person is not in gender and we do not pre-assign roles based on it). Fortunately, my husband loves cooking, so when our house helpers are on day off, he cooks while my sons and I help with the dishes. He had supported me in my professional and personal growth. He is a businessman and while he is also busy building his business and finishing his masters degree in business, for the duration of my nine-month fellowship here in the States, he is currently the primary home maker, taking care of our household, our three sons while shuttling his time and resources from here to there (Philippines) so we could see each other every month. He does not force me to do the “womanly” stuff of which traditionally, meant tending the house, the husband, and the children. He instead provided me with a home where I could pursue my career, my interests and passion for service.

There is still much to be done. But there are also a lot we have achieved. We have already broken the “glass ceiling.” As aptly said by former UN Secretary General Kofi Annan “There is no tool for development more effective than the empowerment of women.” By presidential proclamations[8], March is OUR month, a month-long celebration of women and our role in nation-building. Earlier, Women 2020 Summit [9] was held to honor women entrepreneurs and to give them platforms to share their stories, struggles and victories. Accordingly, The Philippines topped Grant Thornton International’s 2020 Women in Business report with the most number of women occupying senior management positions. The country is currently one of the best countries to be a female in business.[10] We also have The Outstanding Women in Nation’s Service (TOWNS),[11] a triennial award for exemplary Filipino women.

I am a Filipina. I am a mother, a wife, a daughter, a sister, a reformist, a volunteer, a judge… among the many roles I have at home and in the community. But above all, just like the 53.8 million Filipinas, I am a human being who deserves my place, not because I am a woman but because of my capability, leadership, character and heart for service. I have earned it.

Requerme is currently in the US as a first Filipino cohort of McCain Institute’s Next Generation Leader and placed at the National Center for the State Courts. Requerme seeks to secure justice through technology by the digitization of records in order to preserve the integrity of court records and the entire judicial system. Her recent publication includes “A Call for A Character-Driven Leadership” at  International Association of Women Judges.

[1] The State recognizes the role of women in nation building and shall ensure the fundamental equality before the law of women and men. https://www.officialgazette.gov.ph/constitutions/1987-constitution/

[9] Women 2020 is designed to be the biggest and most inclusive women entrepreneurship summit organized by the ASEAN Business Advisory Council Philippines, in partnership with Philippine Center for Entrepreneurship (or Go Negosyo).