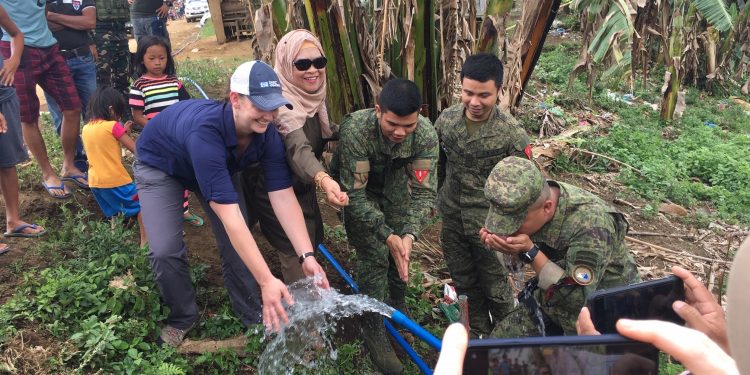 Under the headline, “For U.S. Commandos in the Philippines, a Water Pump Is a New Weapon Against ISIS,” the New York Times recently described how American and Filipino forces are cooperating on humanitarian assistance to address the continuing needs of evacuees from the devastating five-month Marawi Siege that forced nearly 400,000 residents from the Philippines’ largest Muslim city to flee from their homes. Until Marawi City can be rebuilt, many residents remain in temporary shelters or live with relatives in nearby villages straining community services and resources. Although defeated in battle with the liberation of Marawi in October 2017, ISIS-inspired militants continue to target vulnerable populations with propaganda and recruitment campaigns.

To complement the Philippine government’s recovery programs, joint military civic actions teams work to reach the most vulnerable with assistance projects addressing infrastructure needs designed to improve livelihoods and living conditions in rural areas. The Times report detailed one such project in Lanao Del Sur that has brought running water and electric power to residents who formerly had to carry water from a source outside the village and who experienced power shortages.

The article (NYT link) properly credited U.S. Army Civic Actions team leader Captain Angela Smith and Philippine counterparts, and acknowledged the role of the US-Philippines Society. But, there is more to the story.

A driving force behind the water/power project was Society director Paul Shmotolokha of Alpha Technologies in Bellingham, Washington, a global technology company. Paul was motivated to act following a presentation on Marawi at the Society’s February 2018 board meeting program in Manila, where national and local level officials described the aftermath of the siege. Paul wanted to help, understood the needs, and importantly had access to technological tools. Under his leadership, Alpha/Outback Power invested over $60,000 for equipment, shipping and related expenses covering the cost of an integrated solar inverter, charge controller system for off-grid use, Nanocarbon Outback cell batteries, solar panels, and battery racks. Captain Smith worked with the Society to identify a site, and she convinced another NGO that aids civic actions projects around the world to donate the water pump. Solarix, a solar company from Manila, performed the system installation. Paul credits the Alpha project team that included Mark Barcelona and John Webber.

Elaborating on his motivation, Paul said, “The inspiration for this project came from listening to refugees from the war zone of Marawi. They were in the same situation as my parents found themselves as children at the end of World War II – devastated communities, displaced persons and a volatile political environment. I wanted to contribute to their welfare so that they could stay in the area and help stabilize the community so that ISIS would not return. Providing electricity via solar power and energy storage solved the challenge of access to fresh water for this one community, but it can be replicated throughout Mindanao.”

“The ability to provide electricity anywhere in the world 24/7 is what Outback Power’s products enable. In this case, Outback’s electronics convert and store solar power from the panels to a bank of batteries, which, in turn, power the water pumps 24/7 without fail. The system will work as long as the batteries are charged and will last years before a new bank of batteries is needed.”

Paul concluded, “The US-Philippines Society brought together the key partners who teamed up to make this happen – the U.S. Army, Alpha Technologies, and Solarix. It started as an idea at the meeting, and over the course of a year we all made it happen, from Washington, DC, to Washington State, to Manila, and then to Marawi.”

This is a textbook case of effective cooperation among two governments, NGO’s, and the private sector. Vision, resources, commitment, and personal courage are making a difference in people’s lives. The US-Philippines Society thanks you for your interest and support. 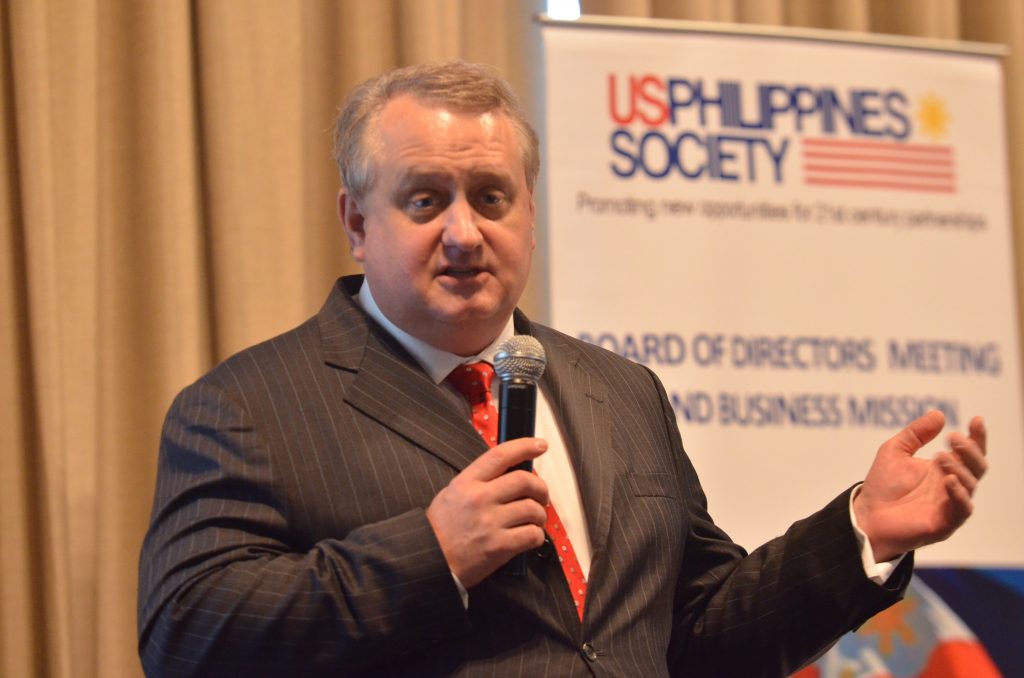 Filipino Worldview: "I shall return"

June 10 - Rizal: The Hero as Traveler