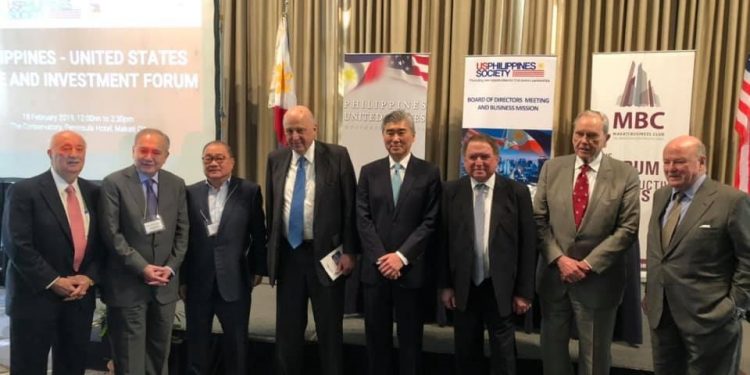 Rarely do we see four former US Ambassadors to the Philippines visiting the country all at the same time. Ambassadors John Negroponte, Thomas Hubbard, Frank Wisner and Richard Murphy were in Manila this week.

The former diplomats who are highly respected both here and in Washington came to Manila, in their private capacity, to attend the US-Philippines Society’s annual board of directors meeting. We welcomed them together with the rest of the USPS board and members at a cocktail reception that was very well attended, with guests that included Executive Secretary Bingbong Medialdea, Finance Secretary Sonny Dominguez and Defense Secretary Delfin Lorenzana together with prominent businessmen Ricky Razon, Manny Pangilinan and other guests. (See photos in This Week on PeopleAsia at the Allure section of the Philippine STAR today.)

Established in 2012, the Washington-based non-profit group seeks to elevate the profile of the Philippines in the United States and strengthen bilateral ties between the two nations.

Ambassador Negroponte co-chairs the USPS with PLDT chief Manny Pangilinan, while the president is John Maisto who was former ambassador to Venezuela and Nicaragua. The executive director is Hank Hendrickson who spent some time in the Philippines as US embassy Counselor for Political Affairs. Also with the delegation is USPS director Henry Howard – our honorary consul in Florida – whose efforts gave the final push in bringing back the Balangiga bells to the Philippines.

Having lived and worked in the Philippines, the USPS directors and officials are already familiar with Filipinos and our unique cultural traits, so they know what it takes to deepen the special ties between the Philippines and the US. The vast network of contacts they have developed in business and government over the years will certainly go a long way in exploring new business opportunities and advancing more productive trade and investment deals that would sustain economic growth, increase productivity and improve the lives of Filipinos in the process.

Ambassador Richard Murphy was Ambassador to the Philippines from 1978 to 1981, and it was during his time that a revised military bases agreement (MBA) was signed, giving the Philippines sovereignty over Clark Air Base. His career with the US Foreign Service spanned 34 years before his retirement in 1989, during which time he was named “Career Ambassador,” a title held by only five diplomats serving at any given time.  He is also a three-time recipient of the President’s Distinguished Award Service and a two-time recipient of the Superior Honor Award by the US State Department.

Frank Wisner, currently an international affairs advisor at Squire Patton Boggs, was ambassador to the Philippines from 1991 to 1992 and also held several positions in the US government that include Undersecretary of Defense for Policy, and Undersecretary of State for International Security Affairs. Ambassador Frank Wisner has kept up with many friends in the Philippines.

Ambassador Thomas Hubbard on the other hand served in the Philippines from 1996 to 2000, with his career in the US Foreign Service spanning almost four decades. He is currently the senior director for Asia at McLarty Associates specializing in Asian affairs. Tom Hubbard and I played golf regularly during his stint in Manila. He and his popular and lovely wife, Joan, frequently visit the Philippines and they have a lot of friends. The Visiting Forces Agreement between the US and the Philippines took effect in May 1999, with Ambassador Hubbard and then-Foreign Affairs Secretary Domingo Siazon as signatories. Ambassador Hubbard co-founded the USPS with former Foreign Affairs Secretary Roberto Romulo.

Ambassador John Negroponte is perhaps the most prominent diplomat who served as Ambassador to the Philippines from 1993 to 1996, preceding Ambassador Hubbard. The USPS co-chairman, who is also the vice chairman of McLarty Associates, had a distinguished career in the US government, serving under US presidents Richard Nixon, Ronald Reagan and George W. Bush who appointed him as the first ever Director of National Intelligence, a Cabinet-level position. Bush also appointed him as Deputy Secretary of State, serving as the chief operating officer of the State Department.

Last Wednesday, we joined the US-Philippines Society delegation to Malacañang for a courtesy call on President Duterte, who spent two hours with the visitors. The president was very pleased with the meeting that also served as an opportunity for the USPS to highlight their mission to “reinforce support for new trade and investment ties through a comprehensive bilateral Free Trade Agreement that benefits both countries by enhancing commercial links, fostering job creation, strengthening internationally recognized standards, and yielding strategic benefits.”

The USPS board also welcomes US government initiatives such as the 2018 BUILD (Better Utilization of Investments Leading to Development) Act that would boost support for American private sector participation in the economic development of countries with low or middle-income economies through infrastructure projects particularly in Asia. The BUILD Act is actually one piece of legislation that both Democrats and Republicans agree on, as it strengthens the agenda of the US in promoting a free and open Indo-Pacific region.

During the meeting, the president talked about his promise to the Filipino electorate in eliminating the drug menace but also mentioned the government’s massive “Build, Build, Build” infrastructure agenda. He also listened to each of the visitors on how they intend to attract more US investments into the country.

What was clear to everybody in the room was how the president described the relationship between the US and the Philippines when he said: “We are your best friend in Asia.”