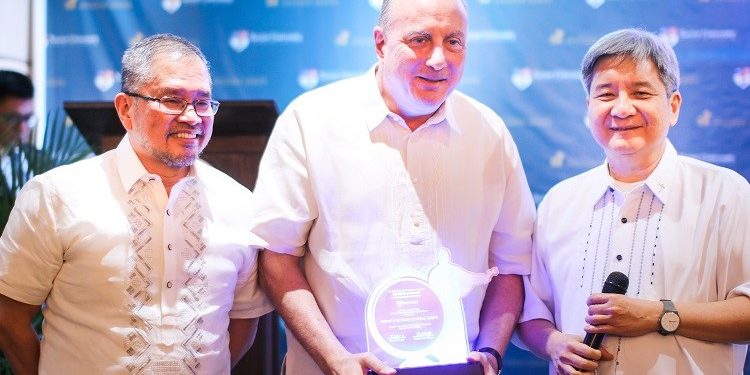 Henry Boland Howard, described as an American philanthropist “with a Filipino heart,” was the guest of honor at the 3rd Xavier University – Ateneo de Cagayan Board of Trustees Speaker Series held in an exclusive event at the Limketkai Luxe in Cagayan de Oro City.

Henry is an American businessman and philanthropist who established a scholarship program at Xavier Ateneo 18 years ago with seed money of US$1M to provide financial assistance to students from “the poorest of the poor communities in Mindanao.”

“I was an AFS (American Field Service) student at Xavier University High School [in 1974],” Henry recounts. “Nobody knew that I was supposed to go to XUHS for one year as an exchange student and somebody asked me, ‘Who’s going to pay your tuition?’ Well, I didn’t have any money [at that time].”

He continues: “So some unknown priest at Xavier decided to give me a scholarship to Xavier University High School and that’s why I’m here today. I want to thank whoever that [priest] was for the scholarship.”

As a high school exchange student, Henry stayed with the Cabaraban family in Puntod and took the jeepney to XUHS every day.

“I must say, I got a very, very good education at Xavier University High School,” he says. “I want to say this objectively that the education I got from Xavier and the friendships I made here and the experiences I had here considerably toughened me up for dealing with investment bankers later in my life.”

He fondly recalls, “I have learned things in Puntod that helped me through my life.” 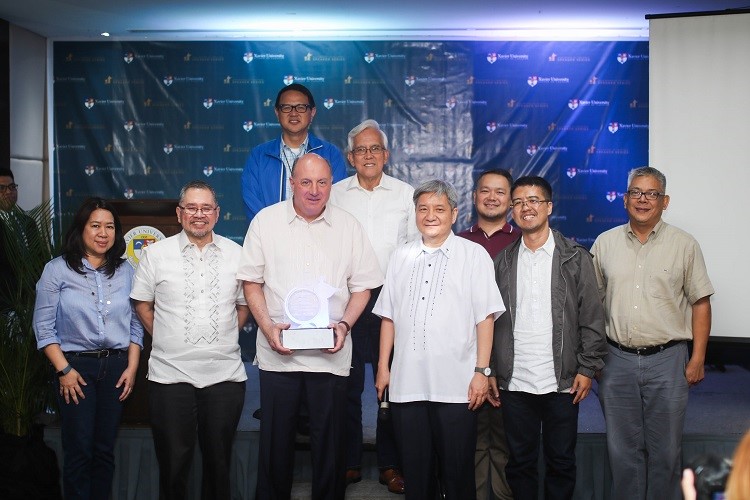 TEAM XAVIER ATENEO. Henry Howard (center) poses with the members of the Board of Trustees of Xavier University – Ateneo de Cagayan.

“I was able to teach a few courses here and it was a great experience,” Henry shares, adding that “I got paid seven hundred pesos a month.”

Henry then went back to the United States and pursued a financial services career, working for various banks, and did a joint venture with a finance company in Miami. Eventually, he built his my own finance company.

“In 1996, I started making more money than I really needed to live. In 2001, I came here and I talked to Fr [Ting] Samson … and we established this scholarship program where it wasn’t supposed to be known by anybody that it was me. That was the case for about five years but it leaked out somehow five years after it was established.”

“God willing and in Sha Allah for our Islamic brothers and sisters here, we should be able to continue this scholarship for another 18 years. I intend to continue it for as long as I can.”

“It is an honor to be standing before you tonight,” says Richel Petalcurin, one of the alumni of the Henry Howard Scholarship, “in the presence of equally inspiring scholars and alumni, the guests, and the man who has become instrumental in our lives, Mr Henry Howard.”

Richel, who used to serve as the Student Activities and Leadership Development (SACDEV) head, is from the hinterlands of Sumilao, Bukidnon whose “daily views are the beautiful hills, mountains, and farm animals.”

“I thank the Henry Howard Scholarship for the chance to uplift my life and alleviate my family from poverty,” she recalls. “It was 10 years ago when I graduated from XU School of Education and got my teacher’s license.” 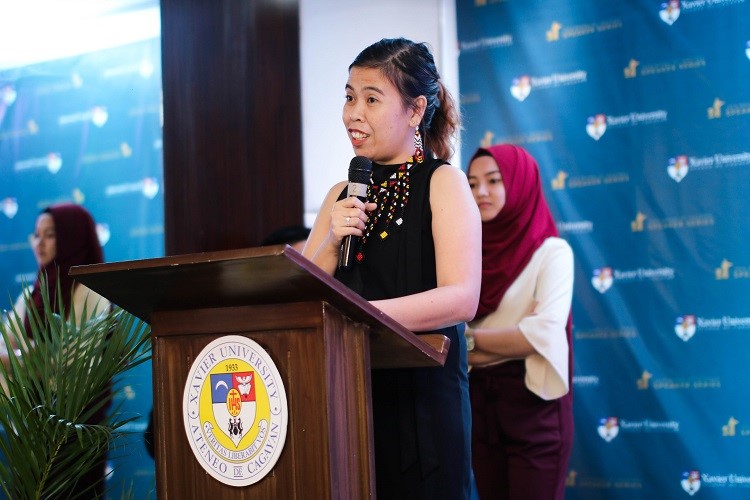 SCHOLARSHIP ALUMNA. Richel Petalcurin, one of the alumni of the scholarship program, thanks Henry Howard for his generosity and the opportunity to finish her college education at Xavier Ateneo.

“I remember, I asked you how can I pay you back for your goodness to us. You told me, ‘pay forward.’ Here I am now, a decade after, I have founded the Pair of Smiles campaign, an education advocacy in the hinterland tribal communities of Bukidnon that seeks to build libraries in each school where our tribal youth are studying.”

After college, Richel returned to her hometown and taught there. She then moved to Cagayan de Oro to work at Xavier Ateneo for five years as the head of Student Activities and Leadership Development. She now works at the local government as the city scholarships head, giving educational opportunities to the “unreached yet deserving students.”

Another scholar Arriana Kani Jupakkal shared: “The lessons that Xavier has taught us and the experiences we have had have formed us into ‘men and women for others.’ With that all in mind, I would like to thank, on behalf of all the scholars present, Mr Henry Howard, for his generosity.”

She added, “We stand here proud as products of your scholarship and of Xavier, and thankful for your kindness.” 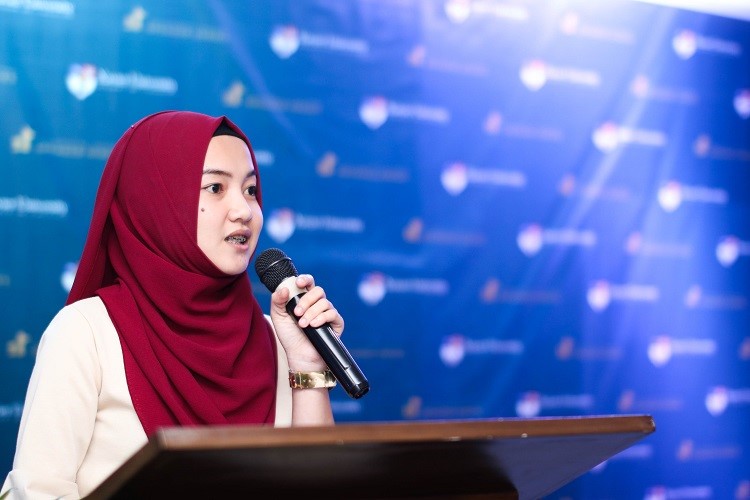 Present scholar Arriana Kani Jupakkal expresses her gratitude to Henry for the scholarship and Xavier Ateneo for the formation.

The Xavier Ateneo Board of Trustees Speaker Series was introduced in March 2017 with guest of honor CDO Mayor Oscar Moreno and the second installment was in September 2017 with business tycoon Jonathan Gotianun.

“Through this speaker series, the Board [of Trustees] aims to connect its members and the university to leaders of government, business, and the community to leverage their wisdom, insight, and inspiration for the benefit of Xavier Ateneo, Cagayan de Oro City, and the Philippines,” says Francisco “Frank” Guerra, chairman of XU’s Board of Trustees.

The event was mainly attended by around 100 guests coming from prominent circles, business groups, and the academe.

“Our distinguished guest speaker tonight is Henry Boland Howard,” Frank says. “Henry has a Filipino heart in an American body. His love for the Philippines is proven not by words but by actions over a long period of time…. And up to this day.” 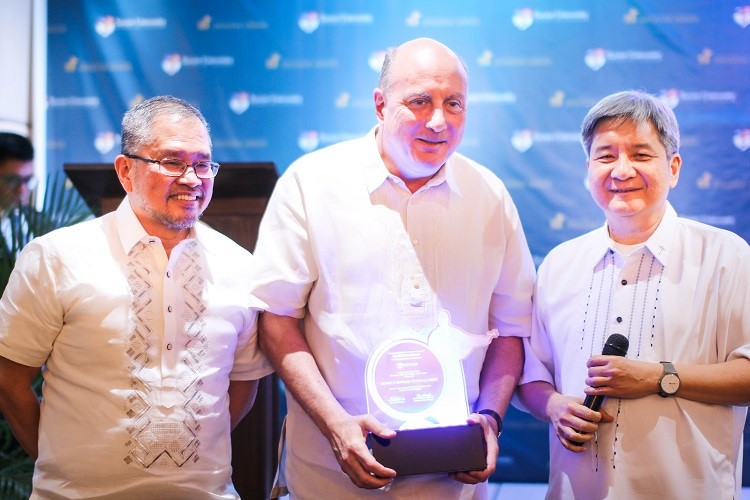 Frank went on to describe Henry as a successful businessman and banker, “an inspired and inspiring global citizen and community leader, and an excellent bridge between governments.”

“Henry is a passionate educator and particularly generous to the poor and underprivileged,” he adds. “In 2001, Henry launched the Howard Scholarship Program for the poorest of the poor, mainly from Mindanao.”

Henry was also hailed by both the public and private sectors for playing a major role in the return of the Balangiga Bells to its original place in Eastern Samar in December 2018.

“When he talked about the return of the Balangiga Bells to the Philippines after working tirelessly with the US Congress, the diplomatic community and the military, to the immense gratitude of President Duterte and the Philippine government, I felt huge admiration for this man who has given so much of himself to our country,” Frank shares. 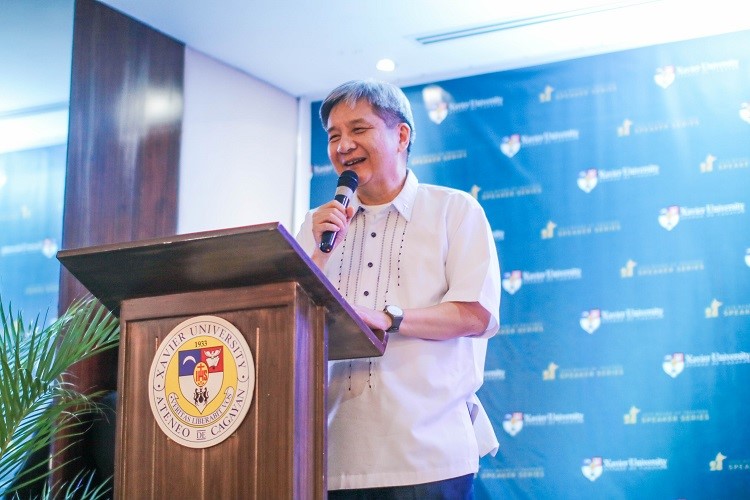 PARTNERS TOWARD DEVELOPMENT. Xavier Ateneo president Fr Roberto “Bobby” C Yap SJ thanks Henry Howard for being one of the active partners of the university in developing Mindanao through his civic engagements and generous scholarship program.

Fr Bobby reads: “With grateful appreciation for the generous support of Mr Henry B Howard to the scholarship programs of Xavier Ateneo, Xavier University – Ateneo de Cagayan certifies that the central lobby of the Senior High School building in the Pueblo campus will be named HENRY B HOWARD CENTRAL LOBBY.”

The crowd applauded as Henry went back to the stage to receive the plaque from the university president.

“Thank you for your deep interest in Mindanao, its peace and its development, your big interest in helping the Bangsamoro, especially now as they begin to really establish their new government that will really drive to work for peace and justice,” Fr Bobby says.

“Most of all, thank you so much for your generosity that is in your heart for Xavier University – Ateneo de Cagayan. Henry is the largest benefactor of scholarships to Xavier Ateneo. Thank you very much for that and we go forward to the next eighteen years.” 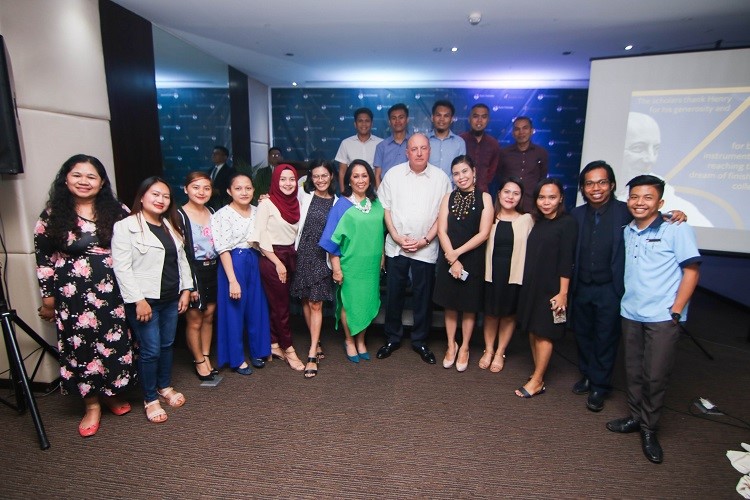 SCHOLARS THEN AND NOW. Henry Howard (center) tells alumni and present scholars of his program to make use of their education to contribute to the development of society. Howard is joined by AFS Intercultural Programs Philippines president Princess Rahiema Bagis-Guerra (standing beside Henry).