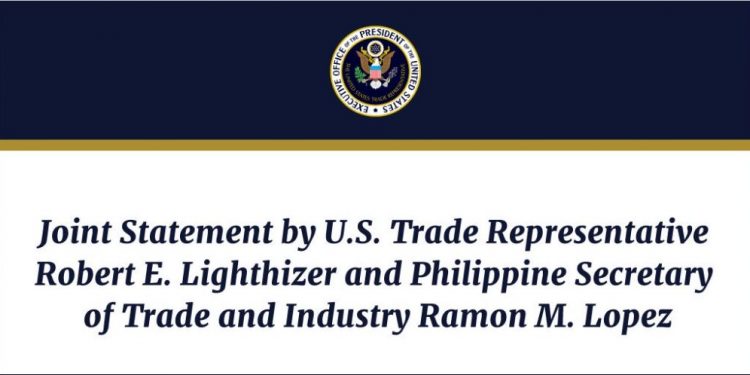 Following the bilateral meeting between the Philippines and the United States on August 31, 2018 in Singapore, during the Association of Southeast Asian Nations Economic Ministers Meeting, and recalling the Joint Statement Between the Republic of the Philippines and the United States of America issued on November 13, 2017, Philippine Secretary of Trade and Industry Ramon M. Lopez and U.S. Trade Representative Robert E. Lighthizer are pleased to announce several recent achievements resolving bilateral trade issues under their bilateral Trade and Investment Framework Agreement (“TIFA”).

Both Governments agree that enhanced bilateral engagement on trade under the TIFA should include work that yields benefits for agricultural producers, importers, exporters and consumers, and intend to work together in a number of areas. Specifically, the United States and the Philippines intend to collaborate on the development of cold chain requirements and best practices in the Philippines, taking into account international guidelines and codes of practice regarding food hygiene adopted by the Codex Alimentarius Commission. This work will build on private sector and local efforts already underway in the Philippines to improve the existing cold chain. The United States agrees to make best efforts, subject to availability of U.S. resources, to provide technical assistance to enhance cold chain development and management in the Philippines.

The United States welcomes the Philippines’ efforts to ensure the WTO-consistent valuation of agricultural imports for duty collection purposes, including the enforcement of laws, regulations, and policies prohibiting the use of reference pricing.

The United States notes that the Philippines is continuing to protect geographical indications (GIs) in a manner mutually beneficial to both countries by ensuring transparency, due process, and fairness in the laws, regulations, and practices that provide for the protection of GIs, including by respecting prior trademark rights and not restricting the use of common names. The United States welcomes the commitment of the Philippines to further discuss ways to ensure that Philippine laws, regulations, and policies do not restrict or prohibit entry of U.S. products in the Philippine market. The Philippines confirms to the United States that it will not provide automatic GI protection, including to terms exchanged as part of a trade agreement.

The Philippines welcomes the progress made with the United States on a number of agricultural trade issues related to access to the U.S. market for mango, young green coconuts, and carrageenan, as well as the expansion of the Generalized System of Preferences Program to include travel goods.

Both Governments pledge to cooperate on the implementation of a U.S. work program in the context of the ASEAN-United States Trade and Investment Framework Arrangement on automotive standards issues. The United States recognizes the Philippines’ commitment to the continued acceptance of vehicles that meet multiple high-standard automotive standards, including, among others, the U.S. Federal Motor Vehicle Safety Standards (FMVSS).

Both governments agree to a continued dialogue on priority issues of interest to both countries, including for the Philippines, discussions on seeking relief from U.S. safeguard measures on solar cells and Section 232 tariffs on steel and aluminum.

Total bilateral trade has grown over the decades to an estimated $27.0 billion in 2016, comprising just over $18 billion in goods trade and nearly $9 billion in services. The Philippines is also a leading beneficiary of the U.S. Generalized System of Preferences program, with roughly $1.5 billion of Philippine goods exports to the United States entering the U.S. market duty free every year. Two-way investment stock stands at around $7 billion.♦

Jan 22 | Forum on the Return of the Balangiga Bells: A Historical Perspective and Significance