Dominguez urges US investors to be part of Philippines’ economic resurgence 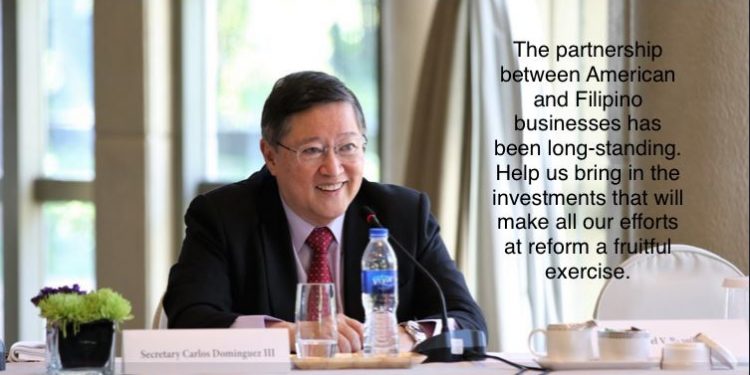 Department of Finance
Republic of the Philippines
February 19, 2018

Manila, Philippines – Finance Secretary Carlos Dominguez III has called on American investors to take part in the Philippines’ resurgence as Asia’s next powerhouse as he assured them that the country’s economy continues to “gather steam” and is poised to grow by seven to eight percent in the near term.

Dominguez issued the call as he cited the “strong and vital” longstanding partnership between American and Filipino businesses, which, he said, is “framed by the deep friendship between our two societies.”

Far from being an “aberration,” Dominguez said the country’s “promising position” as a budding economic powerhouse is the result of 76 consecutive quarters or 19 years of uninterrupted expansion, with the economy’s growth rate steady at 6 percent or better over the past 11 quarters.

“With increased investment flows, tax reform and massive investments in modernizing our infrastructure, we will definitely do better this year and the next,” Dominguez said.

In the last quarter of 2017, he said that the country’s economic growth was fueled by an increase of 14.3 percent in public spending, which, on top of economic investments, also included additional funding to improve access to education and health as well as rehabilitation assistance for victims of calamities.

“Today is a very important time for the Philippine economy. We are on the cusp of rapid expansion and ready to evolve our economy towards investments-led growth. The Philippines is now the third fastest growing economy in the Asia-Pacific region,” said Dominguez at the US-Philippines Society Business forum held recently at The Peninsula Manila Hotel.

He said that “with the strong support from our old friends, our growth prospects could even be better and more sustainable in the coming years.”

“We have come a long way from being called ‘The Sick Man of Asia’ to becoming ‘Asia’s Rising Star’ for investments. We intend to perform even better as an engine of growth for this part of the world,” he added.

As Dominguez spelled out the vibrant developments in the Philippine economy and the programs that the Duterte administration is putting in place to sustain high growth, he told the American investors at the forum to “look at the business opportunities with this context in mind.”

“I invite you to be part of Asia’s next economic powerhouse,” he said.

Dominguez said the Philippines’ economic overdrive is anchored on a cash-intensive infrastructure buildup, which is “helped immensely” by the passage of tax reforms, the first of which—the Tax Reform for Acceleration and Inclusion Act (TRAIN) —was signed into law by President Duterte last December and took effect on Jan. 1.

According to Dominguez, this was the first time the government embarked on a tax reform program without the pressures of a compelling crisis. “This allows for the phased introduction of reforms and careful study of revenue measures. From this year onwards, we expect our tax effort to be significantly better than the regional benchmark,” he said.

The finance chief said he expects the Congress to act on the succeeding packages of the Duterte administration’s comprehensive tax reform program over the next few months.

These include the reduction in the corporate tax rate, which will be balanced with the modernization of fiscal incentives to leve the playing field and ensure transparency, he said.

The remaining packages cover the lifting of the value-added tax (VAT) exemptions for coal and casino operations and reforms in property and capital income taxation, he added.

On the country’s economic outlook, Dominguez said exports expanded significantly over the previous year, while growth on the supply side indicate a broadening base for the economy.

The industrial sector grew 7.3 percent last year, leading the expansion in the economic sectors, while the main growth driver, services—expanded by 6.8 percent.

Meanwhile, the agricultural sector grew by 2.4 percent in the fourth quarter compared to the -1.3 percent decline for the same period the preceding year, Dominguez said.

As far as inflation is concerned, Dominguez said the estimates by monetary authorities still remain within the 2 percent to 4 percent range, as he attributed the recent uptick of 4 percent mainly to the spike in international crude oil prices.

With the recent series of upgrades in the Philippines’ credit ratings, Dominguez said investor sentiment on the Philippine economic outlook significantly improved with new Foreign Direct Investment (FDI) inflows increasing 20.1 percent in the first 11 months of 2017 to $8.7 billion, which is an improvement over the projected $8 billion for the whole year.

“The Philippine economy arrived at this promising position through many years of hard work and tough reforms. We worked down our debt to the present manageable level by fully accepting recommendations for structural reforms. Our debt-to-GDP ratio climbed down from 68.5% in 2005 to only 42.1% in 2017. We improved our tax effort over the years. We maintained strict budgetary discipline,” he said.

Dominguez assured investors that the Duterte administration will maintain this fiscal discipline and will use the fiscal space the government now enjoys to spend bigger on infrastructure investments through the “Build, Build, Build” program consisting of 75 big-ticket flagship projects.

In the first 11 months of 2017, infrastructure spending increased by 11.8 percent over the same period in the preceding year, while for 2018, around 25.4 percent of the national budget, equivalent to 6.3 percent of GDP will be invested in the infra program.

He said that by 2022, or at the end of President Duterte’s term, infrastructure spending will have reached a projected 7.3 percent of GDP.

Dominguez noted that the infra buildup program will create jobs and opportunities for the young Filipinos entering the workforce. “This strategy comes at the precise moment we hit what is called a demographic sweet spot that will require a much larger economy in the medium term,” he said.

“With reforms in other areas, such as drastically reducing red tape and cutting the Foreign Investments Negative List (FINL), we expect the dawn of a truly competitive economy for our country. Our people are fully supportive of the reforms as evidenced by the record approval ratings for the President’s performance,” he added.

Presentation of "Explore Islands Philippines in May 2018"

China’s Infrastructure Investments in the Philippines