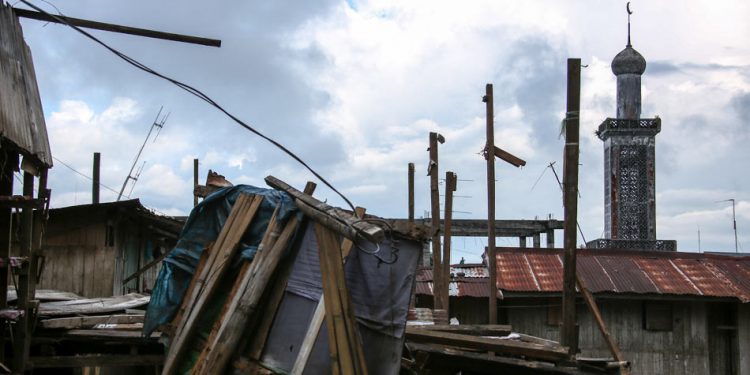 Scenes inside a community in Marawi city on the 6th day of fighting on May 28, 2017. Jonathan Cellona, ABS-CBN News.
FacebookTwitterLinkedinMix

WASHINGTON, D.C.- At a June 15 forum, “Mindanao Update in the Aftermath of Marawi: Political, Security and Development,” the Asia Foundation’s new country representative for the Philippines Sam Chittick provided insights into the ongoing battle in Marawi City. The roundtable presentation, organized by the US-Philippines Society in partnership with the SAIS Southeast Asia Studies in Washington D.C., focused on the causes, key actors, responses, damage, dislocation, and challenges ahead. 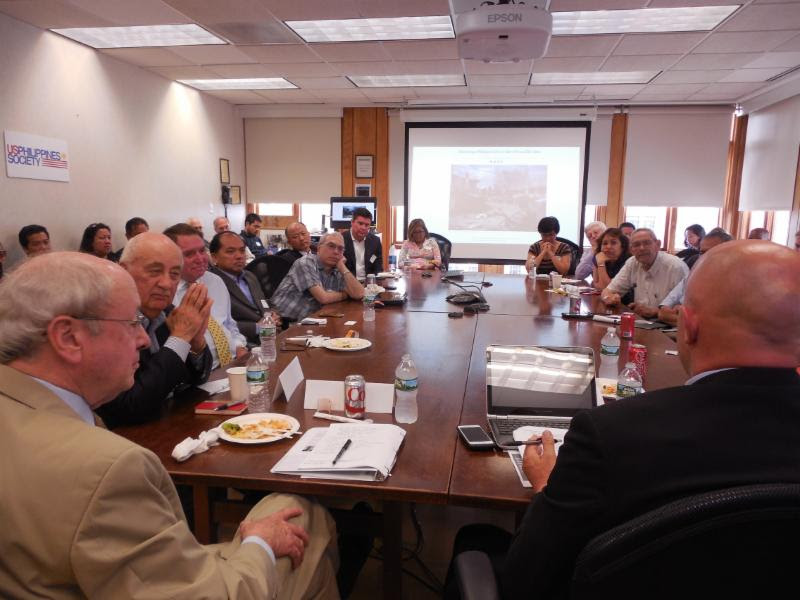 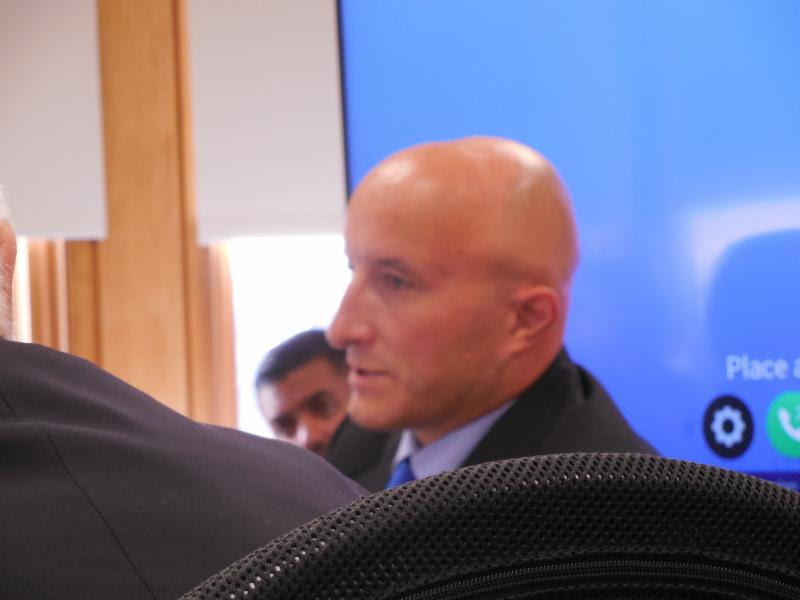 A Merging of Militant Groups

In the run-up to the clash in Marawi City, the Maute group led by brothers, Abdullah Maute and Omarkhayam Maute, and the Abu Sayyaf group led by Isnilon Hapilon carried out acts of terror – the attack in a military detachment in Butig, kidnappings, a bombing in the market square in Davao City, and a prison break. On May 23, the Philippine military attempted to capture Isnilon Hapilon, the designated head of the Islamic State in the Philippines. The operation was followed by terrorist attacks throughout Marawi City, where militants continue to occupy a portion of the city’s commercial district.

On the evening of May 23, President Duterte signed Proclamation no. 216, declaring martial law and suspending the privilege of the writ of habeas corpus for the entire island of Mindanao for 60 days. On May 25, security forces advanced into the city to conduct peace and order operations and rescue trapped civilians. Under heavy airstrikes and intense fighting, much of Marawi was reclaimed by the military. As of June 14, the Armed Forces of the Philippines (AFP) reported 290 deaths including 206 militants, 58 soldiers and 26 civilians. 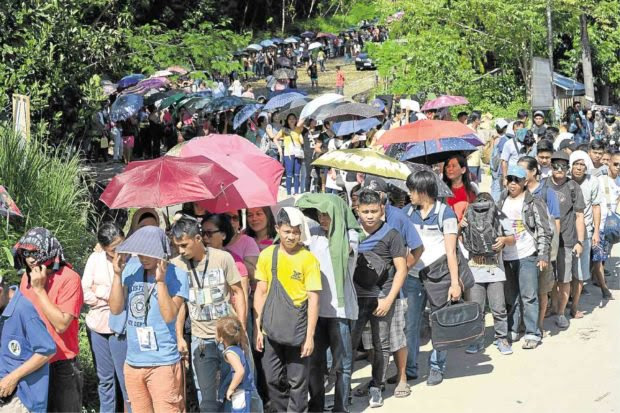 Residents fleeing the fighting in Marawi City queue at a government checkpoint as they make their way to evacuation centers. Photo credit: Philippine Inquirer 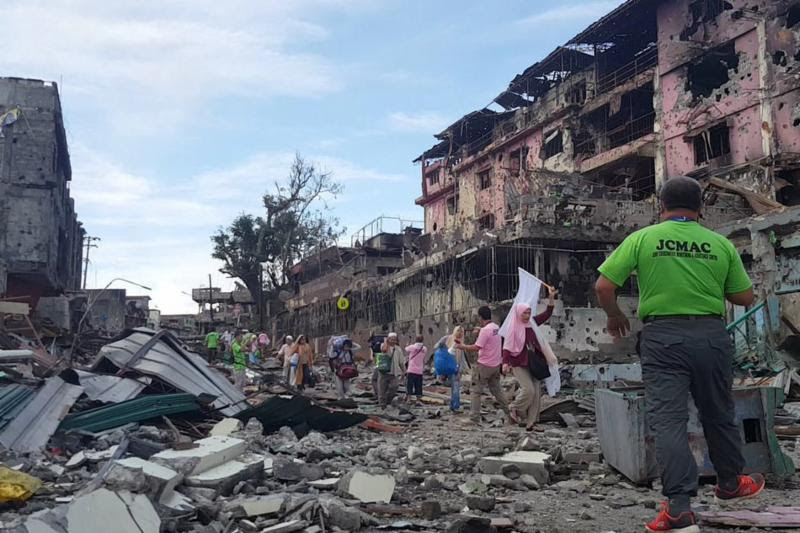 A New Urgency on Steps toward Peace and Security

The government has pledged to renew its commitment “to implement all signed peace agreements in step with constitutional and legal reforms.” Presidential adviser on the peace process Jesus Dureza convened the Bangsamoro Transition Committee (BTC) last week to finalize the crafting of the enhanced Bangsamoro Basic Law. The committee will submit the draft to the Office of the President or to Congress when it reconvenes next month. 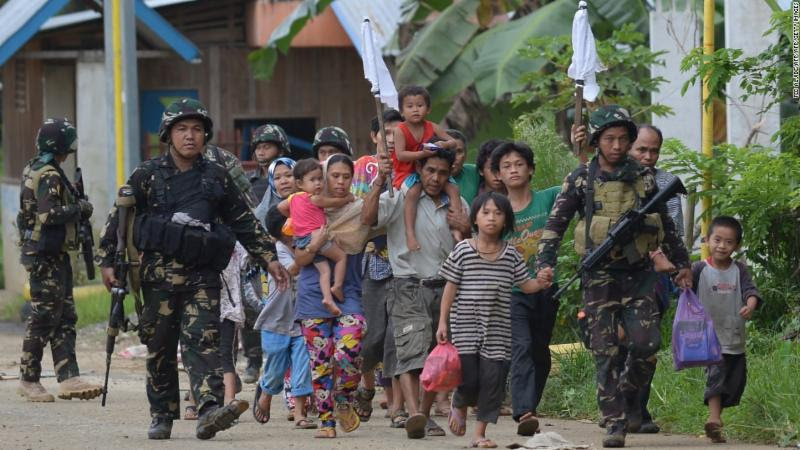 On June 12, as the Philippines celebrated Independence Day, Secretary of State Rex Tillerson said, “the US will honor the enduring U.S.-Philippine alliance,” and offered support as the country confronts the rise of terrorism in the southern Philippines. Recently, US military officials provided weapons and equipment to enhance counter-terrorism capabilities of Philippine Marines actively engaged in the clash with militant groups. At a news conference, military spokesman Lieutenant Colonel Jo-Ar Herrera confirmed assistance by U.S. Special Forces providing Philippine forces with security assistance in the areas of intelligence, surveillance and reconnaissance.

At the local level, the ARMM‘s (Autonomous Region in Muslim Mindanao) Humanitarian Emergency Action and Response Team in coordination with the ARMM’s Crisis Management Committee and the Province of Lanao del Sur reported that 4,000 trapped civilians were rescued. The ARMM continues to assist evacuees, numbered at over 180,000 as of June 12. The numbers continue to grow and are now estimated at more than 300,000. Access to food and water remain an immediate priority for evacuees.

The US-Philippines Society will continue to monitor the Marawi conflict and provide updates on the challenges of addressing humanitarian needs.

June 15: Roundtable on Mindanao in the Aftermath of Marawi