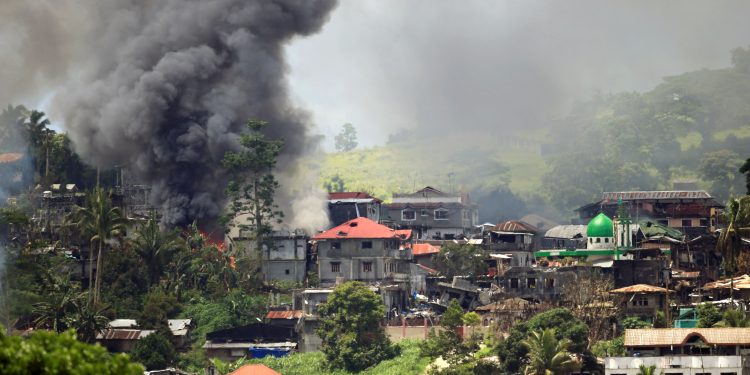 Government troops continue their offensive against the Maute group, self-proclaimed ISIS-backed militant group, which has taken over parts of the city of Marawi. (Reuters/Romeo Ranoco)

Fighting in Marawi City has entered its fifth week and Philippine government troops launched another strong offensive to contain the militant Maute group. According to press and government reports, the Philippine military is intent on liberating the city before the festival of Eid al-Fitr marking the end of the holy month of Ramadan, which may prompt more militant groups to join the fighting.

The armed conflict in Marawi continues with an estimated 100 terrorists and another 100 civilians held hostage and being used as human shields inside the war zone, according to Joint Task Force Marawi spokesperson Lt. Col. Jo-Ar Herrera. The official count of casualties has now exceeded 350 — 268 militants, 62 soldiers and 26 civilians.

Brig. Gen. Ramiro Manuel Rey, commander of Task Force Ranao, said that the military is coordinating with local governments for the recovery and rehabilitation plans of Marawi. The government is finalizing plans for providing tent cities to residents when they return after the armed conflict is over. Government troops are clearing remaining structures of improvised explosive devices and marking them as they reclaim territory.

Most of the 200,000 city residents have fled to neighboring provinces since the siege happened. On June 20, President Rodrigo Duterte visited internally displaced persons or IDPs in one of the evacuation centers in Iligan City. He promised to provide them assistance in rebuilding and rehabilitation of Marawi City.

According to news reports, the Department of Social Welfare and Development (DSWD) provided P1,000 (about $20) to each family staying in the evacuation center at the time of the President’s visit. Because most of the displaced are Muslims, the cash will help them buy food for the Eid celebration. Validated home-based internally displaced families in Lanao del Norte, Bukidnon, Misamis Oriental and Occidental will also be receiving this assistance in the next few days.

The full extent of the damage in Marawi will not be determined until the situation is cleared. Meantime, there is much help needed including urgent medical assistance to the evacuees. Many are suffering from disease and others have died due to ill-equipped, overcrowded and unsanitary conditions in evacuation centers.