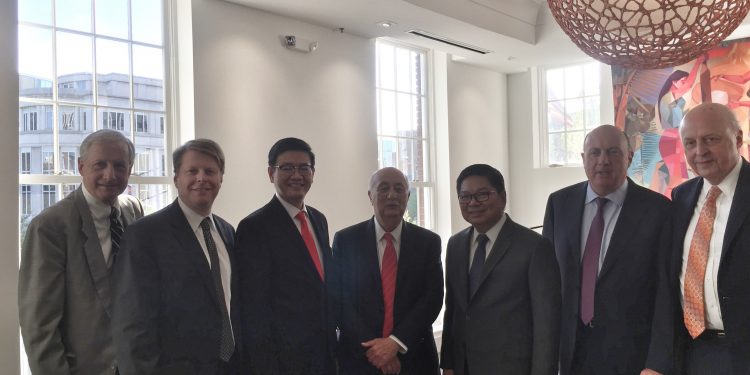 At a Public Lecture at the Philippine Embassy on April 18, Bangko Sentral Governor Amando Tetangco, Jr. presented a positive global outlook and assured investors of sustainable robust economic growth for the Philippines in 2017-2018. The Governor cited World Bank projections of a rebound in advanced economies (U.S., Japan, U.K.) since the global financial crisis of 2008-2009. The Philippine economy is expected to be the top performer in East Asia continuing its streak of 72 quarters of economic growth. In 2016, the GDP grew at 6.9%.

Strong macroeconomic fundamentals, increased infrastructure spending and steady inflow of remittances support growth projections within a target range of 6%-7% in the medium term. Consumer confidence remains high, with new job opportunities, rising family income, and effective government policies. These factors will compensate for rising prices while keeping inflation within target range of 2%-4%. The Bank is expected to maintain a neutral monetary policy stance amid manageable inflationary pressures and moderate credit growth. The Philippine peso strengthened at PhP 49.64, which is marginally stronger than the year-end market exchange rate and will continue to draw strength from increased trade receipts and overseas remittances.

BSP Governor Tetangco will complete nearly four decades with the Bangko Sentral on July 2. He is widely recognized as one of the world’s top central bankers, having received a grade of “A” from New York-based Global Finance publication seven times. Under his leadership, the Bangko Sentral ng Pilipinas has effectively strengthen the banking system through robust reforms to enhance the ability to manage risks and align regulations with international standards and best practices, promote access to banking services, consumer protection and education. The BSP helped shield the economy from external shocks. The bank has increasingly relied on innovative and more targeted measures in its policy toolkit to effectively manage risks. The Bangko Sentral was consistently ranked as the most trusted agency in the Philippines, with effective oversight of the banking system, and retaining institutional independence.