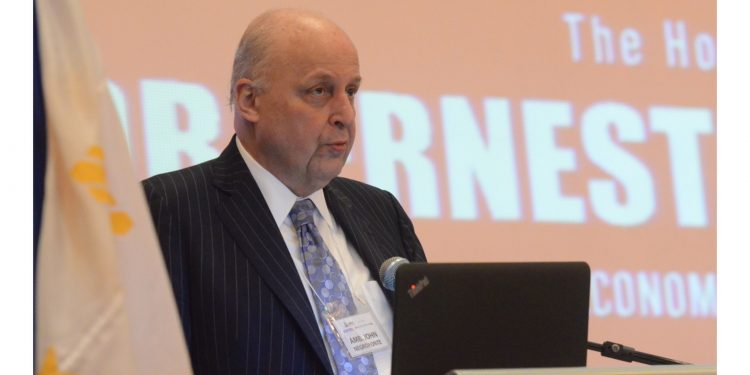 Manila, Philippines
Thank you Ambassador Romulo for that kind introduction.  I am delighted to be back in Manila with the US-Philippines Society. Let me express my appreciation to the Carlos P. Romulo Foundation and the Makati Business Club for hosting this Forum. Sincere thanks to the Society’s co-chair Manny Pangilinan for his continuing support and guidance, and for arranging to have the Society’s annual Board of Directors meeting program held at such a critical juncture during this transitional year in both countries. We will say thanks to President Aquino and then meet President-elect Duterte and members of his new team. I am especially delighted that the new NEDA Director-General Dr. Ernesto Pernia is with us this morning.

In addition to Manny, Bobby, and Ramon, it is reassuring to be with so many friends, including Ambassador Joey Cuisia and Ms. Tessie Sy-Coson, along with other Society Directors from both the Philippines and the United States.

2016 marks the 70th anniversary of formal diplomatic ties between the United States and the Philippines. Of course, the history stretches back much further – to 1898 and beyond. Just this month, in observance of the anniversary, a beautiful 8 x 27-foot mural was unveiled at the newly renovated former Philippine Embassy chancery building in Washington. Titled “The Great Promenade of Philippine-American Friendship,” the oil-on-canvas painting by renowned Filipino artist Dominic Rubio of Laguna celebrates significant events and themes woven into our shared history.

Early commercial activity is depicted in the painting as American merchants and Filipino traders conduct business at a bustling marketplace. The commitment to accessible public education is revealed through a picture of Thomasite teachers arriving in 1901. The mural reminds us of the long record of security cooperation with images of the famous group of General Douglas MacArthur, President Sergio Osmena, and Carlos P. Romulo splashing ashore in Leyte to fulfill a promise. More than a century of people-to-people ties are evident in the art as migrants, representing the diaspora of Filipino professionals arrive in the U.S. to become part of the American fabric, and form a nexus that continues to bind our two nations.

Fast forward and you will see that the building-blocks put in place over the decades have served well as a foundation for an enduring, modern 21st century relationship.

Observations on Election Year Developments in the United States

Looking forward, the tenor of those relations will of course be shaped by political currents here and in the U.S. You just had your election. Our “primary election phase” is now over, and with the parties about to hold their nominating conventions, the general election campaign is virtually underway. I have been asked to share a few observations from Washington and will do so with the caveat that political pundits in this U.S. election year have a miserable record. Predicting outcomes is a risky business. But, here is a brief scan.

Virtually no one would have predicted that Donald Trump would emerge as the Republican nominee. Despite vast sums spent against him and talk of a brokered convention, Mr. Trump convincingly won a series of primaries that led his last two opponents to drop out in early May. Analysts were also wrong about Bernie Sanders not being a serious challenger.

With troubling “favorability” ratings, each of the two presumptive nominees enters the race in a somewhat weakened position. And, while the public mood is uncertain, even anxious, analysts think this could be an election for the history books, and one worth watching.

You don’t have to be an insider to understand that Donald Trump is popular with voters who see the system trending in the wrong direction and feel that it will take an outsider to fix it. He also has the advantage of being experienced and comfortable in front of the TV camera, and reaches a vast audience on a nightly basis. But, polls give him low ratings within significant segments of the electorate, especially in swing states, a challenge he will need to address in the campaign.

On the other side, Secretary Clinton appears to face just as many challenges as Mr. Trump on ratings among voter groups. She does have the advantage of facing an opponent with high negatives and will benefit from her association with President Obama, who enjoys increased popularity ratings now rising above 50 percent.

Polls have Secretary Clinton with a 7-to-10 point lead nationally. However, polls will change in the course of the campaign. Many of us can remember that in 1988, at this point, Governor Dukakis had a strong lead over Vice President George H.W. Bush, who coasted to an easy victory in November.

There is much to consider, but let me identify three areas to watch as the campaign plays out. Each has implications for American foreign policy under the next administration.

First, is the way economic concerns are being defined around the issues of “jobs and trade.” Influential elements in both parties point to job losses, especially in the manufacturing sector, as eroding the strength of America’s middle class. The criticism over “bad trade deals” is no doubt strengthening the hand of interests opposed to the TPP, for example. Expect candidates for the Presidency, Senate, and House to have even more difficulty this year in convincing voters that the dispersed economic benefits of global trade really do more than offset inevitable losses in some sectors of the American economy. It has become harder to win the sensible argument that “trade is the solution, not the problem,” when it comes to promises and policies to drive economic growth.

Second, is the way security concerns are being framed. Public support remains undiminished for a tough approach toward international and domestic terrorism, especially in the wake of the horrific Orlando shootings. At the same time, campaign rhetoric this year has touted an “America First” approach to foreign policy, reflecting fatigue in some quarters with the country’s foreign military operations and commitments.  Candidates will be more challenged to articulate how security policies designed to make America safe are integral to sustained global engagement and commitments in Europe, the Middle East, and the Asia-Pacific.

Third, is the immigration debate. Concerns over both security and jobs are linked together by advocates of stronger border protection and increased restrictions on immigrants. The argument is that restrictions will both preserve jobs and keep citizens safe. Some have framed the debate as pitting fears against values. A broader foreign policy concern is that this kind of rhetoric can nudge the public to accept policies favoring less global engagement and more isolation.

On US-Philippines relations, regardless of the election outcome in America, our two countries will stand together against a range of global threats and challenges, including terrorism, cyber threats, climate change, narcotics and people-trafficking, and the principle of freedom of navigation. The United States has defended the Philippines’ right to pursue arbitration to address maritime disputes in the South China Sea and urges all parties to use this as a basis to move forward. U.S. leaders have called on all of the parties to exercise restraint and find a peaceful resolution.

I have stated before that the Philippines is a logical anchor for U.S. engagement in the region. And, it was good to hear the Obama Administration’s explicit statement earlier this month that the U.S. alliance with the Philippines remains “a core pillar of our rebalance to Asia” – and that US-Philippines cooperation can help influence the direction of what has been termed the “Pacific Century.”

The United States and the Philippines security partnership rests firmly on mature and balanced terms.  The Enhanced Defense Cooperation Agreement is the most significant step in defense ties since the bases era. EDCA supports the long-term modernization of the Philippine Armed Forces, strengthens the US ability to respond and assist rapidly after natural disasters, and is tangible evidence of our commitment to promote regional stability.

Cooperation also extends to other areas including work on development through the Millennium Challenge Corporation, the Partnership for Growth, in areas of marine biodiversity, student exchanges, and high-tech innovation.  The US-Philippines Society, private enterprise, diaspora ties, the regional architecture, and civil society organizations all complement government-to-government relations and impart a uniquely rich texture to the Philippine-American relationship.

There is much to build on as we move forward. The Philippines has been on an upward trajectory, with steady high rates of economic growth, and a commitment to good governance, development and enhanced security. We understand the incoming administration intends to continue policies that have underpinned that success, as it tackles issues of citizen security, regional development, and more inclusive growth.

The US-Philippines Society is delighted to present American audiences with insights into many of the exciting developments taking place in today’s Philippines. With a solid foundation in place, we see every reason for new leaders in both the Philippines and the United States to commit to more progress as partners on trade and investment, peace and stability, innovation, and people-to-people exchanges. This is a story worth sharing, and let me assure you, we will continue to do our part.