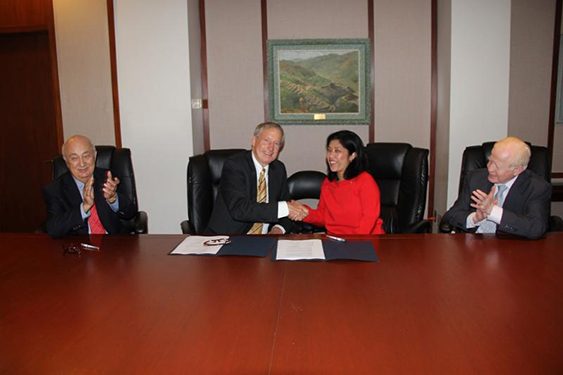 WASHINGTON, D.C.- On November 6,  2015, the Philippine Embassy in Washington, D.C., the US-Philippines Society (US-PHS), and the Science and Technology Advisory Council – Silicon Valley (STAC-SV) signed a Memorandum of Agreement (MOA) that institutionalizes the linkage between the two organizations in supporting technology-enabled entrepreneurship.

The agreement serves as a platform for collaboration between the two organizations  and enables them to  support technology-enabled entrepreneurship through STAC-SV’s immersion programs, including its workshops, which will take place primarily in Silicon Valley. The MOA is also a took to promote entrepreneurial growth, business development, and leadership in the Philippines.

As an initial project, STAC-SV and the US-Philippines Society will work together in the execution early next year of a prototype Silicon Valley immersion program designed for the winners of the Philippine Long Distance Telephone Company’s (PLDT) SMART SME Nation ” Be The Boss” 2015 competition. This is intended as a first-step in a continuing process of high tech exchanges.

The program comes at the initiative of US-PHS Co-Chair Manuel V. Pangilinan and is designed to promote private sector-based Philippines-U.S. cooperation in the area of high tech education, business entrepreneurship, and opportunities for expanded bilateral trade.
The SMART SME Nation, in collaboration with Rappler, launched the first #BeTheBoss Awards as a new kind of initiative, using social media to undertake a crowd-sourced search to recognize next generation entrepreneurs at the frontiers of the information and communications technology revolution.
There were over 500 nominations from across the Philippines. Public voting came down to the 15 strong finalists selected in a rigorous panel process that identified three finalists in each of five categories: 1) E-Commerce, 2) Social Media, 3) Customer Service, 4) Social Responsibility, and 5) Mobile Readiness. Five entrepreneurs were awarded as new Bosses on the #BeTheBoss Awards night on Wednesday, October 28, at the Bonifacio Global City in the Philippines. Each of the five winners were recognized for pioneering efforts in innovative business application of information technology.

In her remarks at the ceremony, Ms. Le lauded the project as “another demonstration of the strong bilateral relationship of the United States with the Philippines.” Ambassador Maisto characterized the program as exciting and modern, especially since it involved young entrepreneurs.

Ms. Laskowski expressed a strong sense of optimism and excitement about the program noting the “very healthy ecosystem for investors and entrepreneur” that now exists in the Philippines under the Aquino Administration. She also noted that such ecosystem benefits not only the MSME’s that are active participants, but also the communities around them. “Technology-enabled entrepreneurship is also women empowering,” she added.

In his remarks during the signing ceremony, Ambassador Cuisia expressed the hope that “this institutional relationship that we have witnessed sealed this afternoon will result in projects that will allow the young men and women of our two great nations to learn from each other and unleash their collective creativity and entrepreneurship with a view to more productivity and competitiveness in the global market place. For truly, in this world transformed, the only limits to the creativity of our people, especially the young, are their imaginations.”

A 501(c)(3) non-profit, nonpartisan, and independent organization that aims to broaden and expand interaction and understanding through basic research and/or applied research in the areas of security, trade, investments, tourism, the environment, history, education and culture between the United States and the Philippines which would benefit the American public and the people of the Philippines.

An organization of professionals with expertise in important areas of science and technology, and which provides strategic advisory assistance to the Philippines and United States, and promotes holistic entrepreneurship.
FacebookTwitterLinkedinMix
Previous post