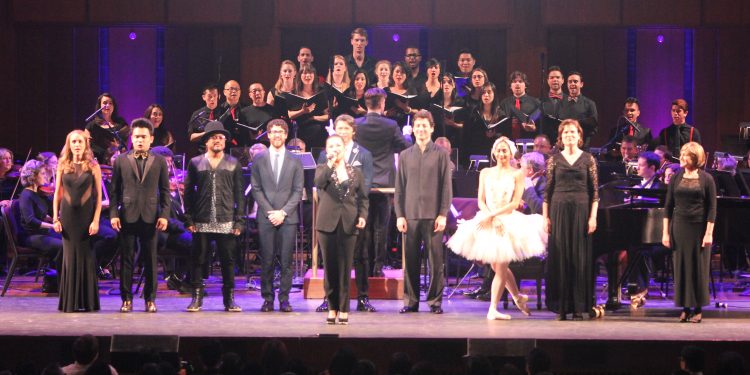 WASHINGTON, D.C.-“After The Storm”-the star-studded benefit concert gala for the Philippines held at the Concert Hall of the Kennedy Center for the Performing Arts on Sunday, June 15, was a huge success drawing a diverse crowd and calling attention to the post-Typhoon Haiyan recovery and rehabilitation efforts.

Young and old, Filipinos, Americans, members of the United States Congress, US government officials, diplomats and many others filled the Concert Hall for the much-awaited performances by an all-star lineup led by Filipina Broadway artist Lea Salonga and Hollywood star Lou Diamond Phillips.

The Philippine Embassy said the concert was a tribute to those who lost their lives in Typhoon Haiyan and to those who helped in rescue, recovery, and rehabilitation efforts. It was also a celebration honoring Filipinos and their resiliency as the country rebuilds after Typhoon Haiyan.

Ambassador Jose L. Cuisia, Jr., who initiated the concert with his wife Maria Victoria, after Typhoon Haiyan struck in November, expressed his gratitude to those who lent a helping hand to the Philippines during the difficult times following the typhoon.

“I am truly heartened by the compassion and kindness shown by the American people and other friends throughout the world, who rallied to come to the aid of those in need. I hope this spirit of solidarity will persist long after we overcome this adversity. I look forward to continue working with you all and contribute to rebuilding the lives of our brothers and sisters in Central Philippines,” Ambassador Cuisia said.

President Benigno S. Aquino III, in a video message, also thanked the US Government and the American people for their assistance to typhoon victims in the Philippines. He also congratulated the US-Philippines Society and the Philippine Humanitarian Coalition for organizing the concert.

Vice President Joseph Biden, in a message read for him by his daughter-in-law Kathleen, reiterated the commitment made by President Obama when he visited the Philippines in April. He said the US will continue to stand by the Philippines not only during troubled times but also as the country gets back on its feet and rebuilds after Typhoon Haiyan.

United Nations Secretary General Ban Ki-moon in his video message to those at the concert said: “I visited the Philippines after the typhoon. But there was a little something that kept the people going.”

Ambassador John D. Negroponte, Co-Chair of the US-Philippines Society, said he was delighted to see how effectively Americans and Filipinos joined in making the benefit concert such a success. “Performers and presenters, sponsors and patrons all pulled together to send a “message of hope,” assuring people in the central Philippines that they can succeed and are not alone in rebuilding their lives after Typhoon Haiyan,” he said.

Ambassador John F. Maisto, President of the US-Philippines Society said the concert featured an exceptionally broad repertoire that included Broadway tunes, hip-hop, ballet, opera, contemporary and classical music in a spectacular display of entertainment by world-renowned artists from the Philippines and the United States. Everyone left wanting more.

“Despite the seriousness of the occasion, let’s all have a good time,” said Salonga, a Tony Awardee, before she sang a medley of “I Dreamed a Dream” and “On My Own” from the musical Les Miserables and a duet of “A Whole New World” from Disney’s Aladdin with Filipino-American singer and songwriter Darren Criss, who is best known for his role in Glee, the television musical.

As with anything involving music, Filipinos know how to have a good time. Members of the audience danced to “We Can Be Anything” sung by Allan Pineda Lindo, more popularly known as apl.de.ap of the Grammy Award-winning group Black Eyed Peas, as well as his rendition of “Where is the Love” with Criss. 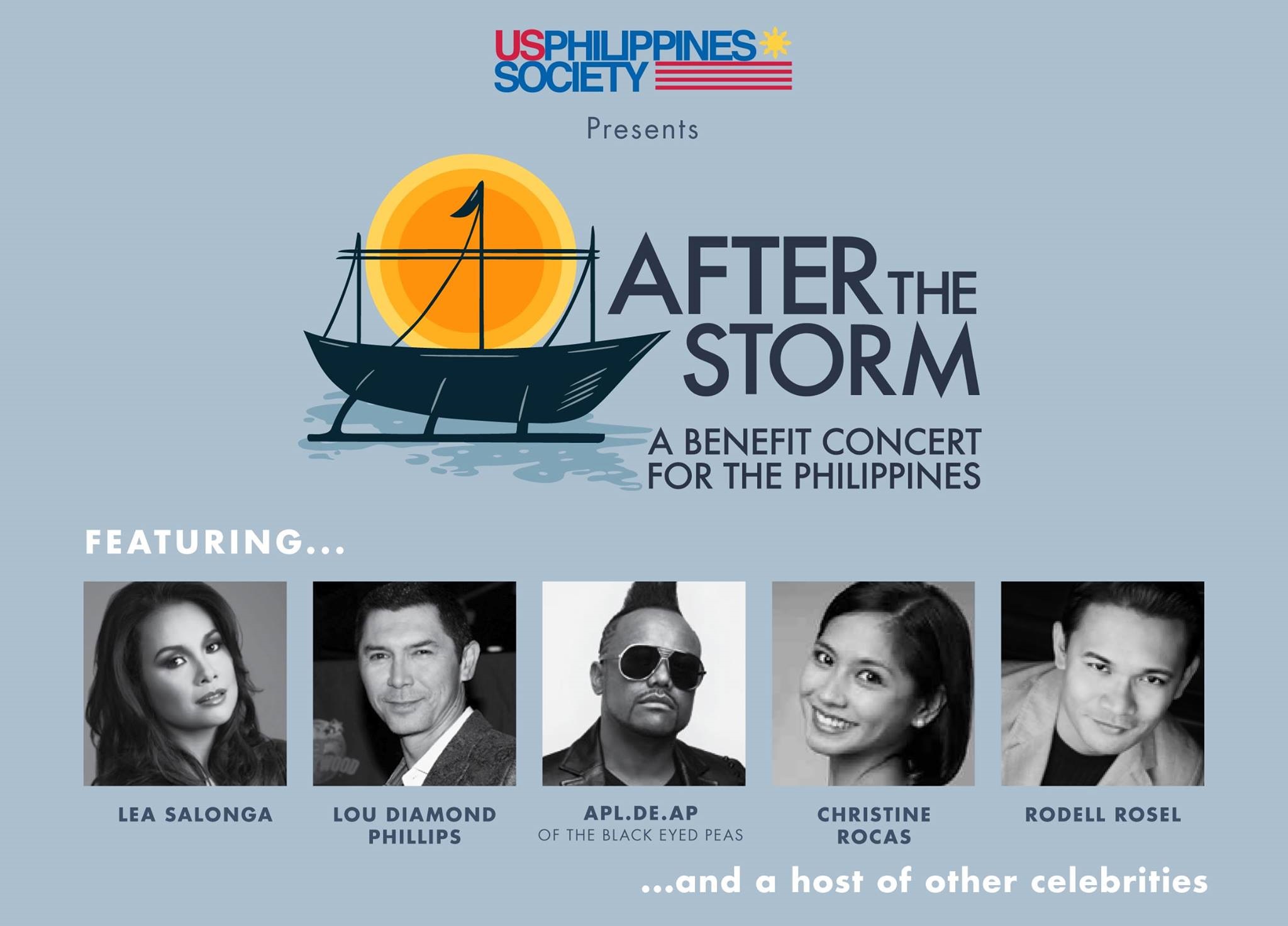 The concert line up was a mix of various performance styles. Other artists who performed where Charice Pempengco; violinist Philippe Quint; ballerina Christine Rocas; and tenor Rodell Rosel. Filipina fashion designer Josie Natori was among the presentors.

The performers and even those who were not able to be at the concert sent their well wishes and reminded the audience of the resiliency of the Filipino people. Those who sent their messages include Gloria and Emilio Estefan, James Caan and Suze Orman.

Vice President Biden’s second son, Hunter, World Food Program USA Chairman of the Board, also went on stage to tell the audience how impressed he was with the resilience of the Filipino people. He said he was particularly amazed at seeing typhoon victims, among them children, welcome him with smiles along the roads of typhoon-devastated Tacloban.

After the Storm: A Benefit Concert for the Philippines, was produced by Emmy Award nominee Robert Pullen and directed by Baayork Lee, was also made possible through the help of generous sponsors from both the US and the Philippines.

Pullen said, “it was such an honor to be part of such an extraordinary evening.  From the world-class talent to the warm and embracing audience.  Last night, we came together for an important and necessary cause, not as Americans, Filipinos or any other nationality.  Human beings came together to stand united with other human beings in need.  The language of the arts, through music and dance, spoke for all of us.  To be a part of that remarkable experience, was truly a life-changing moment.”

Community and Sectoral OutreachCultural and Educational