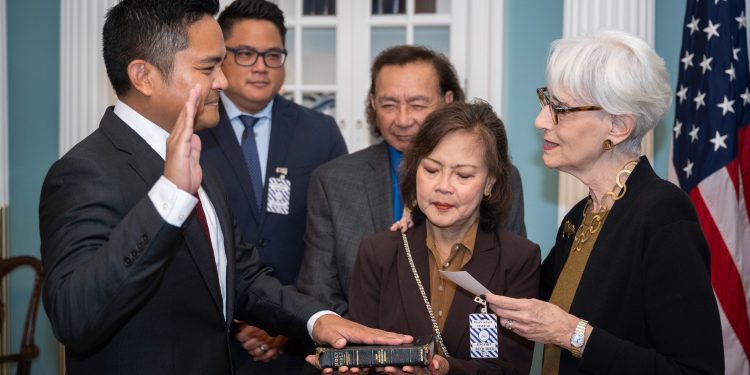 Richard Lee Buangan, of California, is a Career Member of the Senior Foreign Service and Ambassador Extraordinary and Plenipotentiary of the United States of America to Mongolia. He was nominated by President Joseph Biden on April 15, 2022 and confirmed by the Senate on August 8.

Ambassador Buangan previously served as the Principal Deputy Assistant Secretary in the Bureau of Global Public Affairs at the State Department. Prior to that, Buangan served as Deputy Assistant Secretary in the Bureau of East Asian and Pacific Affairs, and as the Executive Assistant to the Secretary of State. Earlier in his career, Buangan was assigned as Managing Director for International Media in the Bureau of Public Affairs, as the Public Affairs Officer of the then-U.S. Consulate General, Jerusalem, and as Deputy Press Attaché and then as Embassy Spokesperson of the U.S. Embassy in Beijing, China. Ambassador Buangan also served as a staff officer in the Executive Secretariat of the Department of State, and held overseas assignments in Paris, France and Abidjan, Côte d’Ivoire.

Buangan earned a Bachelor of Arts degree from Saint Edward’s University, Austin, Texas. He is the recipient of multiple performance awards from the State Department. He speaks Mandarin Chinese, French, and Spanish.

The US-Philippines Society congratulates Ambassador Richard Lee Buangan, a Filipino American who grew up in tight-knit Filipino American communities in California and Hawaii and has proudly represented the United States as a diplomat for over two decades. He advocates for a “diverse and inclusive society where everyone feels welcome and everyone can contribute.”

Deputy Secretary Sherman described Ambassador Buangan as “distinguishing himself through hard work, skilled diplomacy, and positive, collegial relationships, he will reinforce our pride as Mongolia’s third neighbor.” (Mongolia, bordered by China and Russia, considers the United States as its third border.)

We join President Joseph Biden, First Lady Jill Biden, and the White House Initiative on Asian Americans, Native Hawaiians, and Pacific Islanders in celebrating the Filipino American History Month marking the anniversary of the arrival of first Filipino settlers in America in October 1587. We take this opportunity to highlight the contributions of Filipinos and Filipino-Americans to American Society.

In a May 26, 2022 Opinion by Ambassador Buangan for The San Diego Union-Tribune, he said,

“Today at the State Department, Asian Americans continue to serve at the highest level of leadership proudly serving their country here in Washington and at our embassies and consulates around the world. They are not just our undersecretaries, ambassadors and special envoys, but also foreign service and civil service professionals working alongside our colleagues in the national security community to protect Americans overseas, promote U.S. businesses and to keep America safe.”