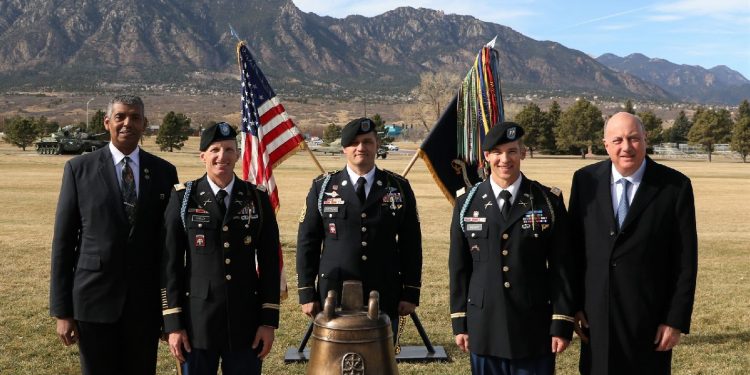 Fort Carson, CO– A replica of one of the three Bells of Balangiga was unveiled at Fort Carson, Colorado during a November 20 ceremony. US-Philippines Society director Henry B. Howard attended the dedication ceremony at the invitation of General (ret) Vincent K. Brooks, a former commander of 2nd Battalion, 9th Infantry (Manchu) Regiment. Gen Brooks, a career Army officer who retired from active duty in January 2019 as the four-star general in command of all U.S. Forces in Korea and the United Nations Command, described the presentation as an excellent resolution. Presentation of the replica bell was meant as a gesture of enduring friendship and alliance between the United States and the Philippines. The U.S. Army band of the 4th Infantry Division provided music at the ceremony. The original bell, which had been at a U.S. Army museum in South Korea, was returned to the Church of San Lorenzo de Martir in Balangiga, Eastern Samar last year. The replica bell was made possible through the generous support of Director Howard.

The 9th Infantry was one of the first units authorized in the United States Army following the Act of 16 July 1798. The 9th Infantry regiment earned the honorary title “Manchu” during the Boxer Rebellion in China. Following duty in China, the regiment served during the Philippine-American War, including action in Samar.

The Manchu bell came to the U.S. toward the end of the Philippine-American War in 1902 “traveling with the Manchus and today remains part of Manchu heritage and used at events like changes of command and the ‘Manchu Mile,’ a biannual 25-mile overnight hike,” wrote RADM Daniel W. McKinnon, Jr., Bells of Balangiga historian and US-Philippines Society member.

The infantry served through 21st century including in Operation Iraqi Freedom I and II. The Manchus are now based in Fort Carson, Colorado. 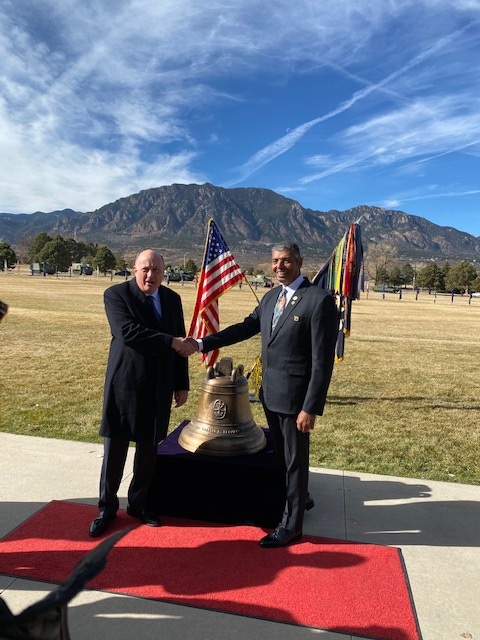 Dedication ceremony of the replica of the Manchu Bell in Fort Carson, Colorado led by General (ret) Vincent K. Brooks. The replica was made possible through the generous support of US-Philippines Society director Henry B. Howard.