Author Margaret Sullivan’s Remarkable Journey in Indonesia and the Philippines 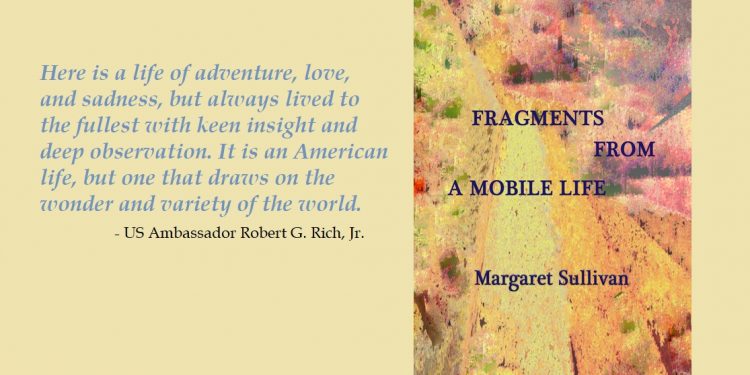 Fragments from a Mobile Life
FacebookTwitterLinkedinMix

WASHINGTON, D.C.- Reflecting on life after six diplomatic assignments spanning three decades, author Margaret Sullivan shared the unique perspective of an American Foreign Service family, beginning at a time when the United States was expanding diplomatic relationships with emerging democracies. The October 23 book discussion of Sullivan’s book “Fragments from a Mobile Life” focused on two countries, Indonesia and the Philippines, and drew an audience of former and current State Department officials, expatriates, embassy officers and members of the US-Philippines Society and the US-Indonesia Society.

Reading excerpts from the book, Sullivan highlighted the risks, challenges and opportunities encountered throughout a fast-paced diplomatic experience, including lessons in embracing a cross-cultural way of life. She described the enriching value of developing an extensive network of friendships while delicately balancing family life and official duties. 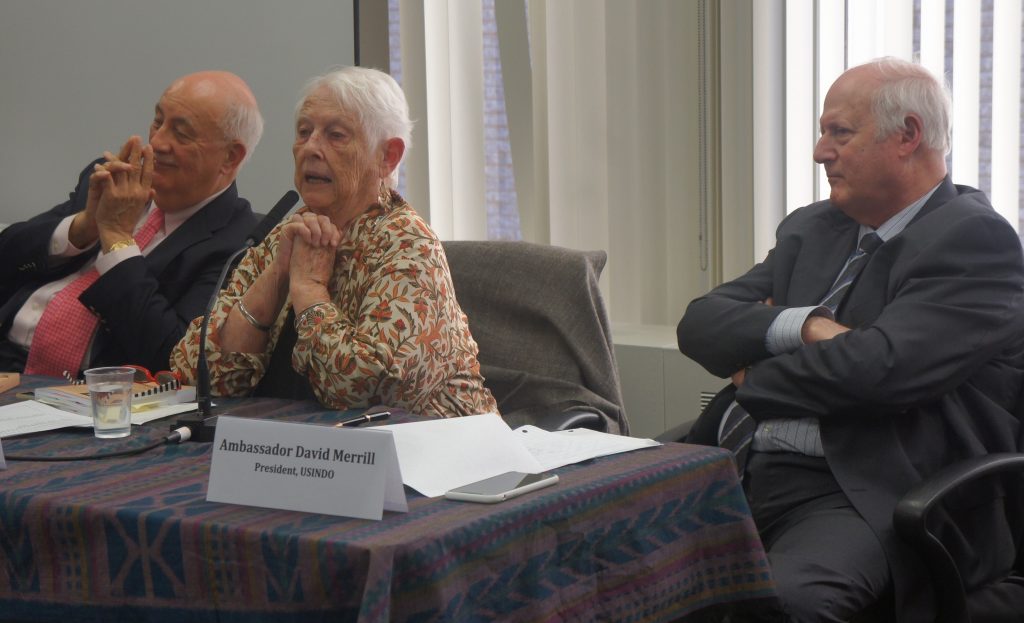 The Sullivan family arrived in Jakarta, Indonesia in 1967, two years after a coup d’etat which established a New Order Government under General Suharto. Ms. Sullivan described that period as a mix of excitement and hope.

“With the help of an impressive team of Berkeley-trained Indonesian economists, the country’s focus was on much needed economic recovery. We also got to know many Indonesians who were deeply invested in re-framing their country to be more democratic,” she read.

It was also a period of student protests against the high price of rice and gasoline among other things. Ms. Sullivan who had accepted an English teaching job at the University of Indonesia, helped students articulate their grievances in written English.

“Ironically, teaching at the university during a time of ongoing student unrest meant I knew people who were often not involved with officials from the embassy. I naturally heard things that they might not otherwise have known.”

In August 1971, Ms. Sullivan joined her husband, Dan, who was transferred to the American Consulate in Cebu City in the central Philippines. A year later, President Ferdinand Marcos issued Proclamation 1081 placing the country under martial law.

The Foreign Service involved risks and rewards, “we lived as we lived because we loved the life and believed that representing our country was an honor. We understood that diplomacy – then and now – is the front line of American security, and therefore worth the risks,” Ms. Sullivan stated.

Ms. Sullivan invested in lasting relationships. She immersed herself in the full spectrum of culture, tradition, local satire, history, food and religion.

“What I learned is that Cebu, which was a substantial, well organized, independent, pre-colonial trading center, is at the heart of the modern country’s history and the anchor of Spanish Catholicism. In 1521, Cebu is where Magellan and the Spanish conquistadors first set foot. Three monuments mark Magellan’s voyage.”

“The first obelisk was built in the late nineteenth century by the Spanish rulers. It reads ‘To the Glory of God, Spain,and in honor of Queen Isabella.'”

“The second, a plaque erected by the Philippine Historical Society in 1940 under the American commonwealth government, recounts the circumnavigation of Magellan established ‘by the facts.'”

“The third was erected in 1952 by the Philippine Historical Society under independent Filipinos. It reads ‘In honor of Lapu-Lapu, who killed Magellan, thus becoming the first Filipino to fight Western aggression.'”

In February 1986, she returned to the Philippines to witness and report as member of the press about the snap election process and events that led to the People Power revolution and ascension of Cory Aquino to the presidency. It was one of many trips including coverage of the orderly transition from Cory Aquino to President Fidel Ramos.

By luck or opportunity, Ms. Sullivan returned to Aceh, Indonesia as coordinator in a collaborative multi-year project to build a privately-funded model high school after the island was struck by a 9.3 earthquake that lasted for 10 minutes and the powerful tsunami that ensued causing hundreds of thousands of deaths and devastation in December 2004. US-Indonesia Society supported the founding of the school.

Sullivan’s presentation covered public diplomacy, Malay culture with aspects of indirectness, expanded family networks, American perspectives on Filipino consciousness and identity, and the complex historical relationship between the US and the Philippines. She described how with eyes on the ground, Americans can gain a fuller understanding of how to interact effectively with an increasingly globalized world.

Ambassador David Merrill, President of US-Indonesia Society, remarked on how cross-culturalism can promote harmonious and mutually beneficial relationships. Ambassador John Maisto, President of US-Philippines Society, emphasized the roles of the two societies in calling attention to personal stories, people-to people ties, and engagement, which on a broader scale is an essential underpinning of bipartisan support in foreign affairs.

The event was a joint program by the US-Indonesia Society and the US-Philippines Society. 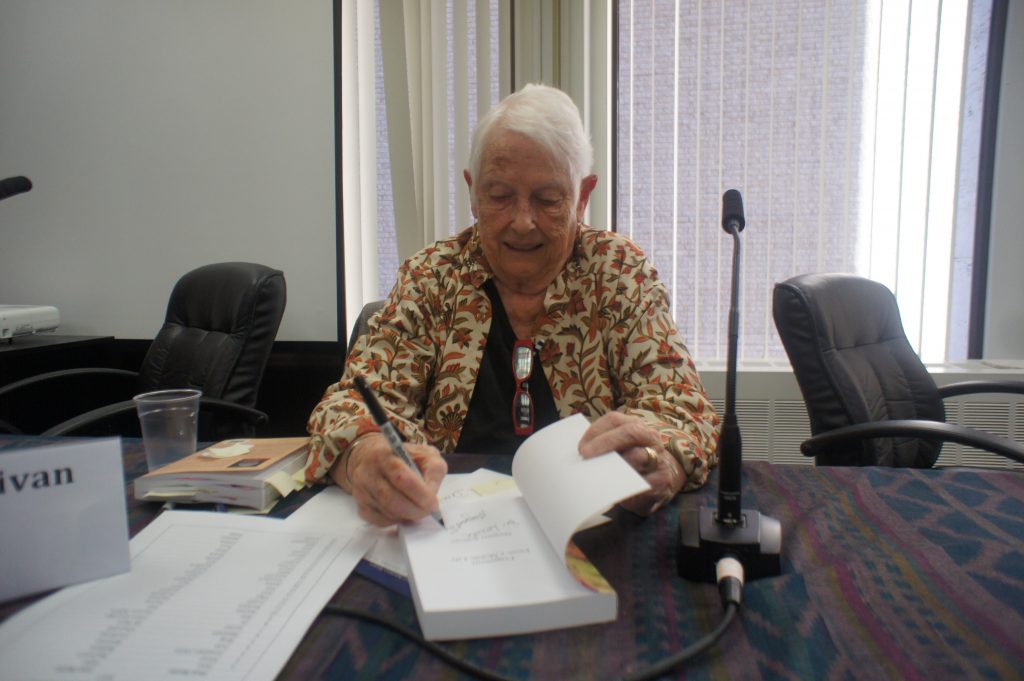 Book signing after the discussion 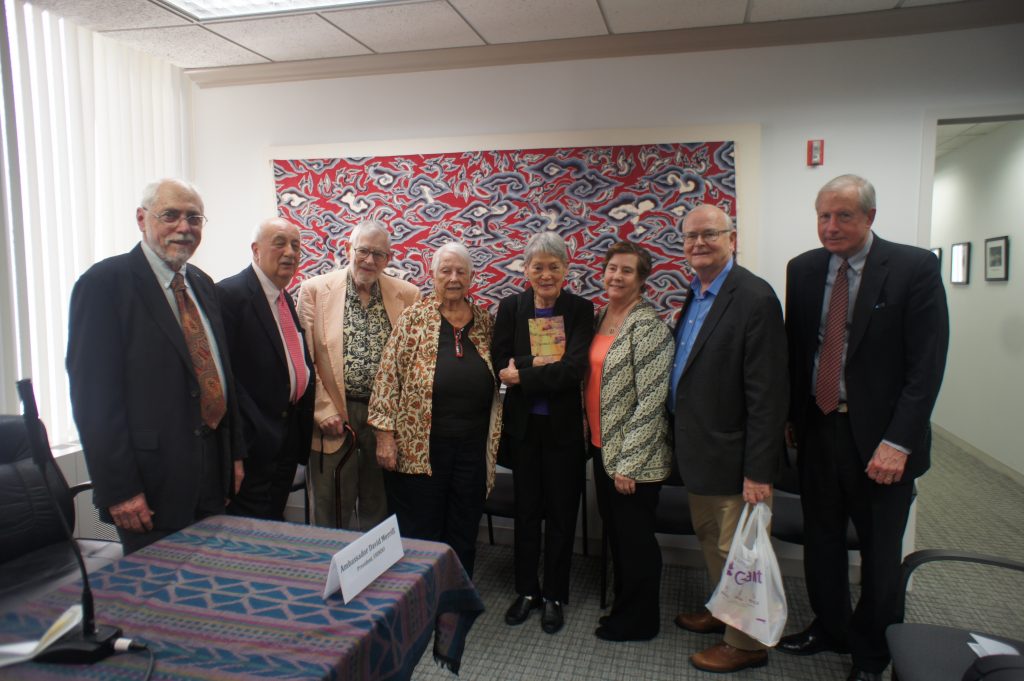