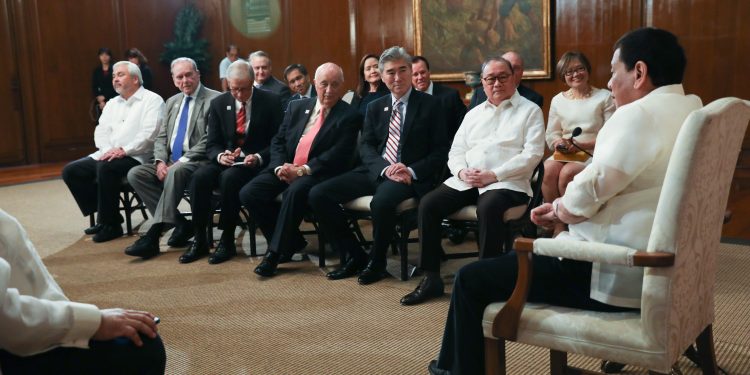 President Rodrigo Roa Duterte discusses matters with the officials from the US-Philippines Society who paid a courtesy call on the President at the Malacañan Palace on February 20, 2019. SIMEON CELI JR./PRESIDENTIAL PHOTO
FacebookTwitterLinkedinMix

Directors of the US-Philippines Society concluded a highly successful five-day business mission to the Philippines on February 20 with a call on President Rodrigo R. Duterte, who welcomed the Society’s bi-national board, led by Co-chair Manuel V. Pangilinan and Society President Ambassador John F. Maisto. The president cited the steady Philippines-United States relationship, and expressed confidence in continuing bilateral cooperation across the board. He expressed appreciation for the work of the Society and its members on the return of the Bells of Balangiga. Senior Philippine cabinet officials, along with Ambassadors Jose M. Romualdez and Sung Y. Kim, participated in a discussion aimed at exploring expanded business opportunities and sustaining strategic cooperation. The USPS delegation registered support for enhanced bilateral trade arrangements, including a Free Trade Agreement, and assured the president that American business is eager to participate in new partnership opportunities, especially in the energy, infrastructure, and ICT sectors. The Society also pledged support for a Philippine trade and investment mission to the United States this April.

In a February 18 meeting with legislative leaders, including Senator Koko Pimentel and Representatives Max Rodriguez and Jess Manolo, the delegation discussed the Philippines 2019 congressional agenda, prospects for progress in Mindanao under new autonomy arrangements and transportation partnerships, including in the maritime industry. Sen Pimentel reviewed progress on implementation of the president’s campaign agenda as the Duterte administration approaches mid-term. On February 19, Chair of the Economic and Energy committees, Senator Sherwin Gatchalian, assured the delegation that the Philippines welcomes the prospect of increased trade and investment, and participation by American companies in meeting the country’s energy needs and technology requirements.

The American embassy’s senior commercial officer, Diane Jones, outlined a series of recent U.S. government initiatives, including bipartisan support for the “Build Act” aimed at increasing the competitiveness of American business in region, including in the Philippines.

Former American ambassador to the Philippines Frank Wisner keynoted the Society’s Business Forum organized with support from the Makati Business Club and the AmCham. Wisner’s presentation cited unique features in the Philippines-U.S. relationship, endorsed a bilateral FTA, detailed the challenges of a changing regional landscape and the promise of effective partnerships into the future. USPS co-chairs Manuel V. Pangilinan and John D. Negroponte provided the forum with dual but complementary Philippine and American perspectives, noting the need to take advantage of new opportunities to forge modern business partnerships. 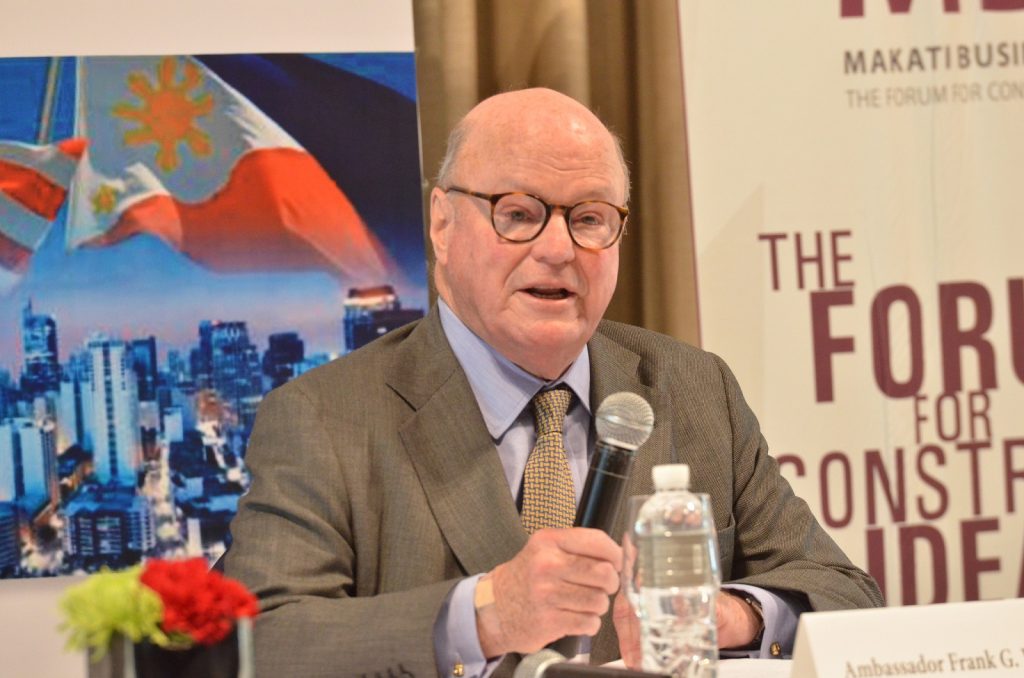 The February 19 Board of Directors meeting reviewed 2018 programs and charted the way forward in 2019. Directors mourned the loss of the late honorary chair Wash SyCip, and noted the continuing robust support of honorary chair Hank Greenberg, who has provided a generous grant to the Punlaan School in Manila to assist women’s empowerment through vocational training and education.

Ambassador Romualdez provided essential support throughout the Society’s annual board program and hosted a welcome reception that brought together USPS directors with top Philippine government and private sector leaders. Highlighting the reception was the awarding of the Society’s 2019 Carlos P. Romulo Award to director Henry Howard for his role in the Balangiga Bells return and initiatives in the field of education that serve to strengthen Philippine-U.S. ties. Society co-chairs Pangilinan and Negroponte also presented a donation from a Filipino community association in Memphis to Defense Secretary Lorenzana to aid families of AFP soldiers. 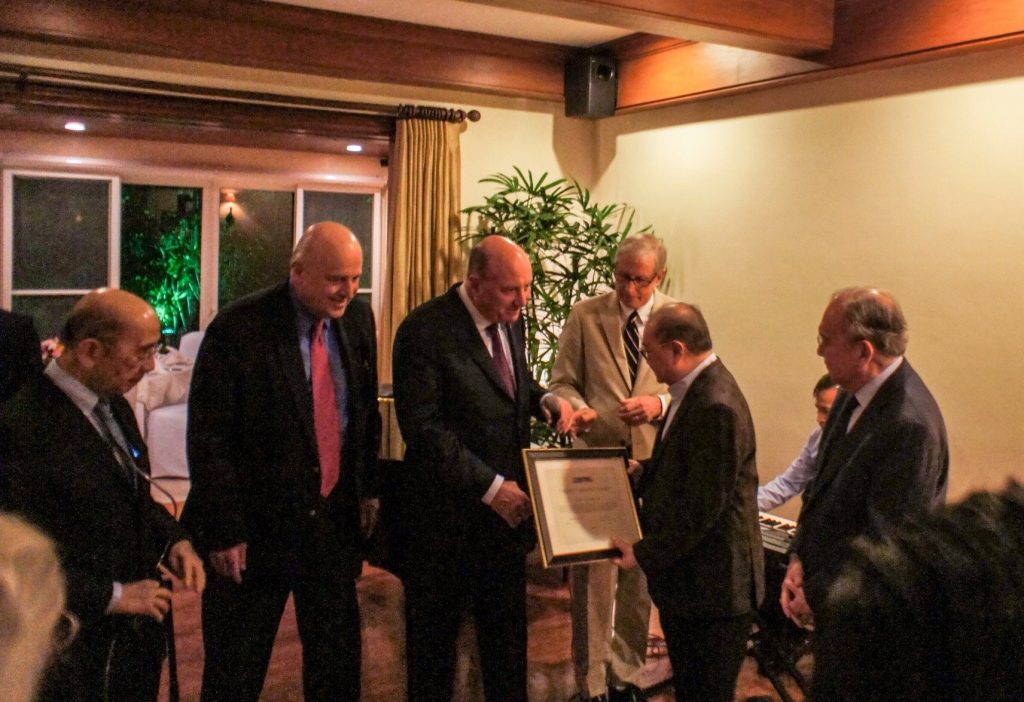 Director Henry B. Howard receives the 2019 Carlos P. Romulo Award for his role in the Balangiga Bells return and initiatives in the field of education that serve to strengthen Philippine-U.S. ties

A group of USPS members visited the parish of San Lorenzo de Martir in Balangiga, Eastern Samar on February 16 to pay respects in the spirit of reconciliation marking the Bells return.

Summing up the five-day program, Amb. Maisto said, “We have learned much during our visit and are well-equipped to structure 2019 program planning in a way that reflects modern Philippine realities, along with how best to meet the challenges and seize the opportunities ahead. Special thanks to our Philippines-based membership, led by Manny Pangilinan, and to ambassadors Babe Romualdez and Sung Y. Kim.” 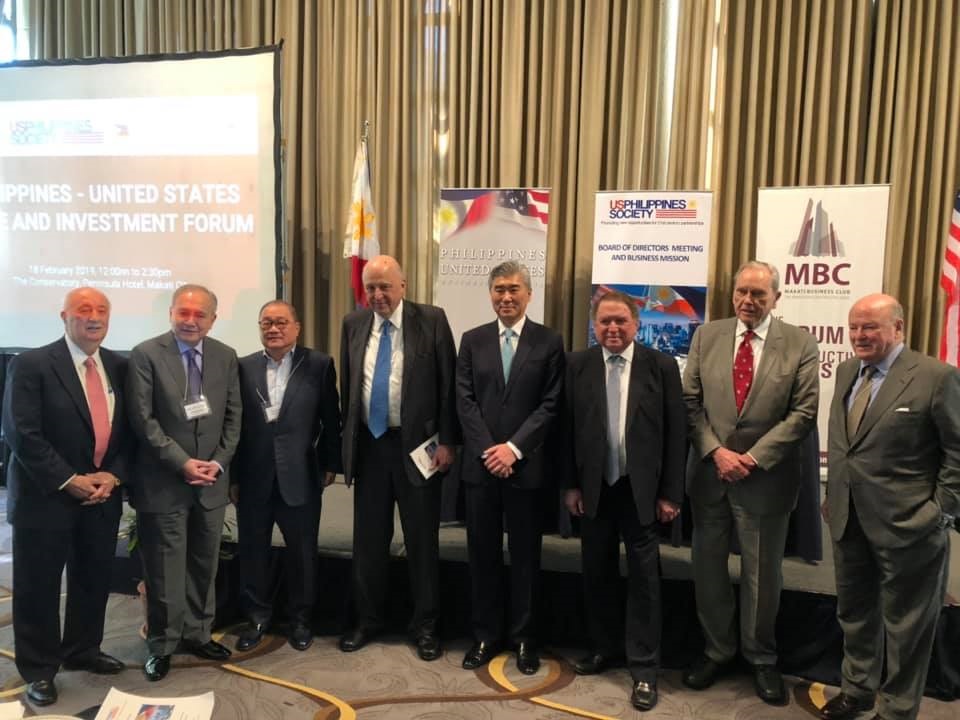