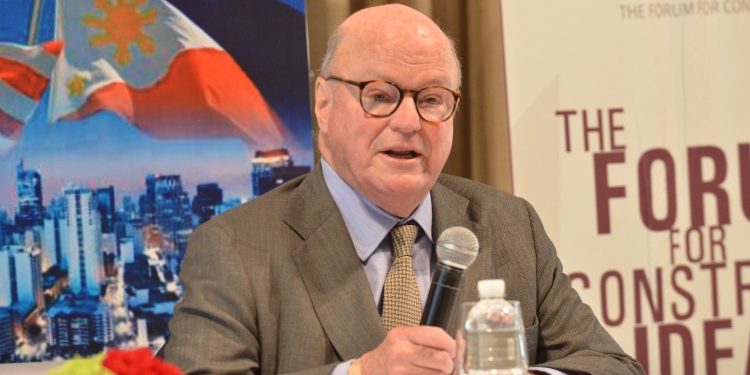 It is a pleasure to return to the Philippines, especially under the auspices of the US-Philippines Society and in the company of so many good and long-standing friends. I have been asked to offer observations on the United States and the current state of US-Philippines relations. I hesitate to engage the first topic because after 120 years of close association, I can assert, with confidence, few nations or peoples know the United States, our strengths and weaknesses, our outlook and prejudices, better than do you Filipinos. From your own experience with politics and governance in the Philippines, you know there are highs and lows in the functioning of a democracy.  There are strong leaders and good policies and the opposite is as true – for you as it is for us.  There are moments when the institutions of our democracies function well and there are times when they do not.

It will not surprise you if I say that never in my life have my assumptions about Americas’ politics, our social order, the quality of our leadership or our place in the world been more deeply shaken. No one can predict which candidate will prevail in 2020, but Americans have every reason to fear our divisions will continue.

Whatever our issues, I am not party to the view that America is in decline. I believe strongly in our future as a successful economy and society and as a great power on the world’s stage. After all, we continue to command most of the spaces that constitute national power and influence, even if our relative standing among world powers has changed.

Furthermore, our most vital national interests force the United States to be deeply involved in Asia’s issues and future: This has been the case for much of our history.  But the assumptions which undergird America’s involvement are changing.

Profound structural shifts in the world and in the Indo-Pacific are underway. These changes are of fundamental importance to the United States and to the Philippines.  Gone is any pretense to a post-Cold War, unipolar world, or to a “wheel and spokes” description of American policy which came into currency in the 1990’s.  The world no longer accepts the indispensability of America’s leadership (some call it hegemony).  All of us are in global, uncharted waters on our way to a point where “several powers of varying size and capability contend for primacy and influence and to maximize their individual interests,” to quote Sreedhar Menon, India’s former national security advisor.  In short, the world order we are watching evolve is better understood by those who recall the Westphalian state system in Europe in the mid-17th century which gave birth to the concept of a balance of power.  That order gave primacy to respect for sovereignty and pursuit of national interest.

As regards to our domestic affairs, Americans contend with a number of challenges – a deeply divisive Presidency; in the name of partisan advantage we face sustained attacks on core democratic institutions, like the free press; our polity is sharply divided; we face a rise in populist sentiment and an increase in acts of intolerance and violence. Furthermore, we are not coping well with our education and health care needs, nor are we maintaining and modernizing our infrastructure.  These issues are hard to address, given our divisive politics.

Americans also face an economy, which while registering virtually unparalleled levels of growth, job creation and prosperity, is nonetheless fragile and on the edge of a downturn in its business cycle. In addition, we are entering a thirty or so year transition to an artificial intelligence and information technology driven economy, away from one based on manufacturing, ordinary trade and agriculture.  The changes we can foresee for our economy may be as great as those faced with the arrival two centuries ago with the industrial revolution.

America’s political economy is not producing benefits for all. Inequality abounds.  Wages have been largely stagnant over the past several decades while huge fortunes have been amassed.  The gap between Americans with great wealth and those with modest means is greater than ever.  That fact will influence the 2020 election.

The issues the US faces are to varying degrees shared by others in the West. In addition, Europeans are confronting their own unique challenges:  “Brexit and Gilets Jaunes” to name a few.

In addition , we face a slowdown in the global economy. The world has never experienced the economic growth it achieved between 1990 and 2010, when globalization gathered speed.  No region benefited more than Asia, as your own national economic performance indicates.  But progress for some was not progress for all; the economic wellbeing of key sections of western societies stagnated with, as I noted, negative political consequences.  We are in for a time of slower growth and retrenchment.

The greatest challenge the United States faces internationally is the conduct of its relations with China. Managing the rise of China’s power is a preoccupation that will endure for decades.  In 2018, we decisively entered a third phase in our relations with the Peoples Republic – the first, which followed the victory of Communist China over its Nationalist adversaries, was one of stark hostility; the second was premised on the view that China’s rise posed no long term threat to US interests or even to the global order in which America played a leading role after World War II.  In fact, the belief was widespread that China would become in time “more democratic” and a strong participant in the rules-based, international system.

But by 2018, that view had disappeared, replaced by the belief that the United State had entered into strategic competition with China. From the American point of view, the relationship with China has become adversarial – an attitude shared by America’s political, military and business leaders and is widely reflected in the media and scholarly communities.  In a word, America and China are entering “unchartered waters” and the terms of our cooperation and competition remain to be written.

While I do not subscribe to the theory of a Thucydides Trap (“It was the rise of Athens and the fear that this instilled in Sparta that made war inevitable.”), I recognize the road ahead is a rough, adversarial one and will require great, navigational skills. I do not have to remind you, the challenge is not only an American one.  Nations as diverse as Japan, India, Korea, Indonesia, Viet Nam and Australia are moving to hedge against China, recombining with the United States to assure balance while at the same time developing their own political and economic ties with China.  China’s actions in the South China Sea, over the Senkakus and at Doklam, make the region aware of China’s tendency to overreach.  They, like Americans, are also wary of China’s unwillingness to open its market or abide by recognized trade rules while at the same time pursuing China-centric advantages through One Belt One Road.  China’s preference for bilateral settlements of differences leads to bullying and because of its weight, gives China unfair advantage.

The Philippines certainly shares the region’s ambivalence toward the rise of Chinese power. Your experience in the South China Seas is indicative; but I suspect standing up to China and putting at risk the economic advantages of Chinese economic cooperation is a quandary.

If there is one thing I have learned about the Philippines is that you will define your own interests. Moreover the Phil-Am relationship has changed markedly and it has matured; there is no room in it for American insistence on “the right answer.”  Instead there is a broad appreciation of the importance of Philippine sovereignty.

With that said, my advice to you is simple: Be careful.  Close no doors – not with the United States, not with China and not with your Asian neighbors.  Recognize momentous changes are underway and dangers are real.  And the best interests of the Philippines lie in maintaining close, confident and cooperative relations with both of this region’s great powers.

While I know you will find your own way forward, do keep in mind your long standing security, economic, cultural and political ties to the United States and preserve your ability to engage us. You have important assets at a time when the United States needs support and if you are bold and thoughtful in asserting what you have to offer, you will be taken seriously.

Relationships are only strong if they are nourished and disagreements are skillfully managed. This is true of relations between the United States and the Philippines.  There are differences that gnaw at confidence in our relationship – on both sides.  Your President’s words and actions have been widely noted in Washington and they affect your reputation.  Less well remarked is the performance of your economy, the progress toward peace in Mindanao and the reform of Philippine education. On a more strategic level, there is concern in our administration and on Capitol Hill over the extent of China’s reach into the Philippines – over the South China Sea and in infrastructure development.  The China issue will grow in importance in our relationship.

On the other hand, I am not suggesting you take an adversarial position toward China. And you must preserve and strengthen your ties to your neighborhood.  But to repeat myself, be careful with your reputation, especially as a nation committed to democracy and the rule of law.  These attributes and their practice strengthen you abroad, especially in the United Sates, and to my way of thinking, will do well by you at home.

I am sure Filipinos have an equally long list of issues. My purpose is not to “wash our laundry” but to argue that the Phil-Am relationship needs constant attention.

It is also worth thinking about setting new, important goals which serve to galvanize imagination and action. The prospect of a free-trade agreement is one such idea. I note with regard to our trade relations, a representative of the United States Trade Representative is in Manila this week for FTA discussions.

But keep in mind, if an FTA can be successfully negotiated, it will have to pass both houses of our Congress. At that moment your reputation, especially your human rights record, will count.

I remain a Phil-Am optimist. I am guided in this by the extraordinary, indeed unique, history of our relations.  I am confident the best days are ahead.  And in this optimism, I am joined by my collogues in the US-Philippines Society.