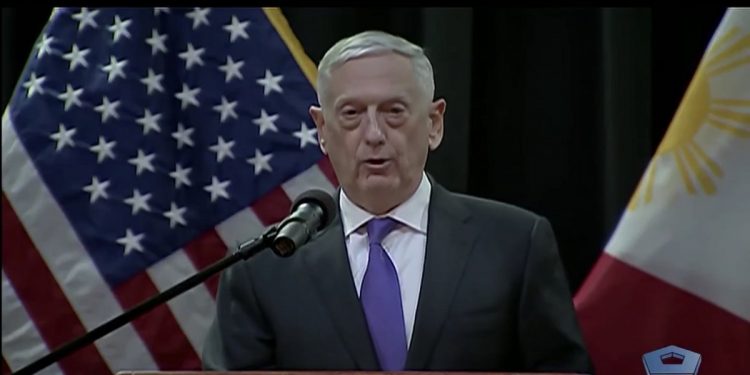 U.S. Department of Defense Screenshot of Sec Def Mattis leads a ceremony at F. E. Warren Air Force Base, Wyo., marking the beginning of the process to return the Balangiga Bells
FacebookTwitterLinkedinMix

Thanks very much, ladies and gentlemen.

The chaplain spoke about peace and unity, and that’s really what we’re here about today: A peace carved out of war.

I would just say Ambassador Romualdez, thanks for being here from Washington D.C.

Governor Mead, thank you for taking the time to be here, sir. We’re honored by your presence. It sends quite a message to everyone in the room, and certainly one that I will carry with me when I go back to Washington; and to the senators who are here, the generals, the men and women of the “Mighty Nighty” — I think I see you guys back there in the rear; the “Manchu” command representatives from the 4th Battalion, 9th Infantry Regiment; and all the veterans, the veteran service organizations; and of course, all the people of Wyoming in this great state.

Thanks for joining us here on the outskirts of the Magic City of the Plains, Cheyenne, a city reminiscent, I think, of America’s rambunctious, pioneering spirit, where ranchers and rail workers built up our young nation, and in a state where Native Americans are honored as citizens, and many as veterans. Building up our nation has continued. It is hard work and it is noble work, and it’s never finished. We all need to do it. It needs all of us, and today we come together.

History teaches us that nations with allies thrive and reminds us that all wars end. In returning the Bells of Balangiga to our ally and our friend – the Philippines – we pick up our generation’s responsibility to deepen the respect between our peoples – linking western people of the great state of Wyoming with people in eastern Philippines. And by the way, Balangiga is only about 40 kilometers as the crow flies from a town named for General MacArthur, right across the hills there — a reminder, too, it doesn’t start with us here in order to end with us here in terms of our friendship and respect.

We return these bells with consideration of our present, but also with utmost respect for our past, one of shared sacrifice as co-equal brothers in arms. For we in the U.S. military do not forget those who stood by our side when the chips were down.

We do not forget the Filipino soldiers and people who fought with us, bled with us, and died with us in the dark days of WWII. In the “green hell of Bataan,” on the “rock” we call Corregidor, on islands and in landings from Leyte to Luzon.

We do not forget our shared sacrifice in Korea, where in 1951, at Yultong, the Philippines’ 10th Battalion Combat Team, though surrounded, held their position against the Communist Chinese onslaught, allowing the US 3rd infantry to escape.

We do not forget how the Filipino people organized doctors and nurses in “Operation brotherhood” in Vietnam.

We recognize how the Philippines stands with America today in the fight against ISIS, against terrorism, a scourge that has struck their home as well.

In this world that is awash in change, we recognize the 117 years of enduring friendship between our people and comradeship in some of the toughest fighting in our nations’ history.

Last Monday, we observed Veterans Day: we honored those who defended our experiment in democracy, what we call America, the ones who restored our freedom and that of the free world in World War II, including the Filipinos who paid dearly at our side.

Today, we aid the future generations by ensuring allies stand together in a future that is ours to shape; and so persuade potential adversaries that it simply isn’t worth it to gamble against Wyoming warriors who live by the cowboy code or their comrades-in-arms from the Philippines.

Our proud veterans, dedicated members of the US-Philippines Society and all those of good will in both the Philippines and the United States who labored so many years for this moment. Thank you!

To those who fear we lose something by returning the bells, please hear me when I say: bells mark time, but courage is timeless. It does not fade in history’s dimly lit corridors, nor is it forgotten in history’s compost.

Let me also speak briefly of a different set of bells, those that toll over the Manila American Cemetery, our largest overseas military cemetery of WWII dead. Inscribed there on its walls are the names of thousands missing in action – American, Filipino and even other nationalities.

Among the buried, native Filipino and U.S. Army Sergeant, Juan Solomon, rests alongside Medal of Honor recipient, Second Lieutenant Dale Christensen of California. Thousands more of our two nations rest with them. All are brothers in arms, reminding us today of the better angels of our nature. By returning the Bells of Balangiga, we listen to those angels and salute the bonds that were tested, but never broken, by war.

Ambassador, bear these bells home back to their Catholic church, confident that America’s iron clad alliance with the Philippines is stronger than ever.

And all of us here can depart today certain in our knowledge of President Truman’s words spoken at the dedication of Arlington National Cemetery in 1949. And we believe those words still hold true today. For the bells of Arlington, but also for the bells of the Manila American Cemetery, and for the Bells of Balangiga, he said, “As these bells ring”…”these honored dead may rest”…and “freedom lives.”

So, thank you very much, ladies and gentlemen. It’s an honor to be here with you today.

With Gratitude, Make US-Philippines Society Part of Your #GivingTuesday