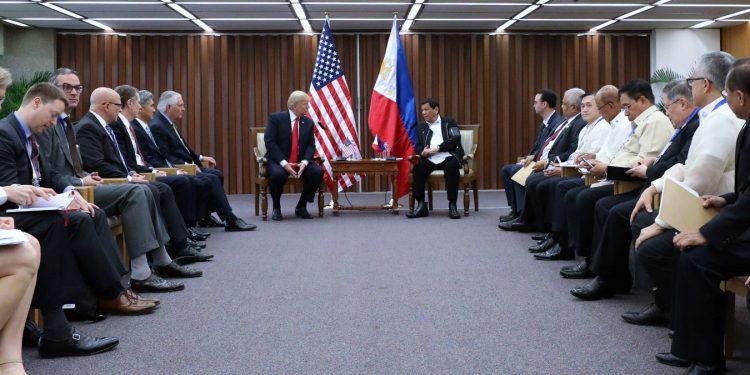 The White House
Office of the Press Secretary

U.S. President Donald J. Trump and Philippine President Rodrigo Duterte met in Manila, Philippines on November 13, 2017, to discuss a broad range of shared interests and priorities. Both leaders praised the enduring United States-Philippines Alliance, built on a strong foundation of shared values, sacrifices, and history, and bolstered by common interests, people-to-people ties, and full respect for legal and diplomatic processes. They pledged to expand cooperation and reaffirmed their commitment to strengthening the bilateral alliance—a 70-year partnership that has stood the test of time and ensures both countries’ mutual security and contributes to regional peace, stability, and economic prosperity. 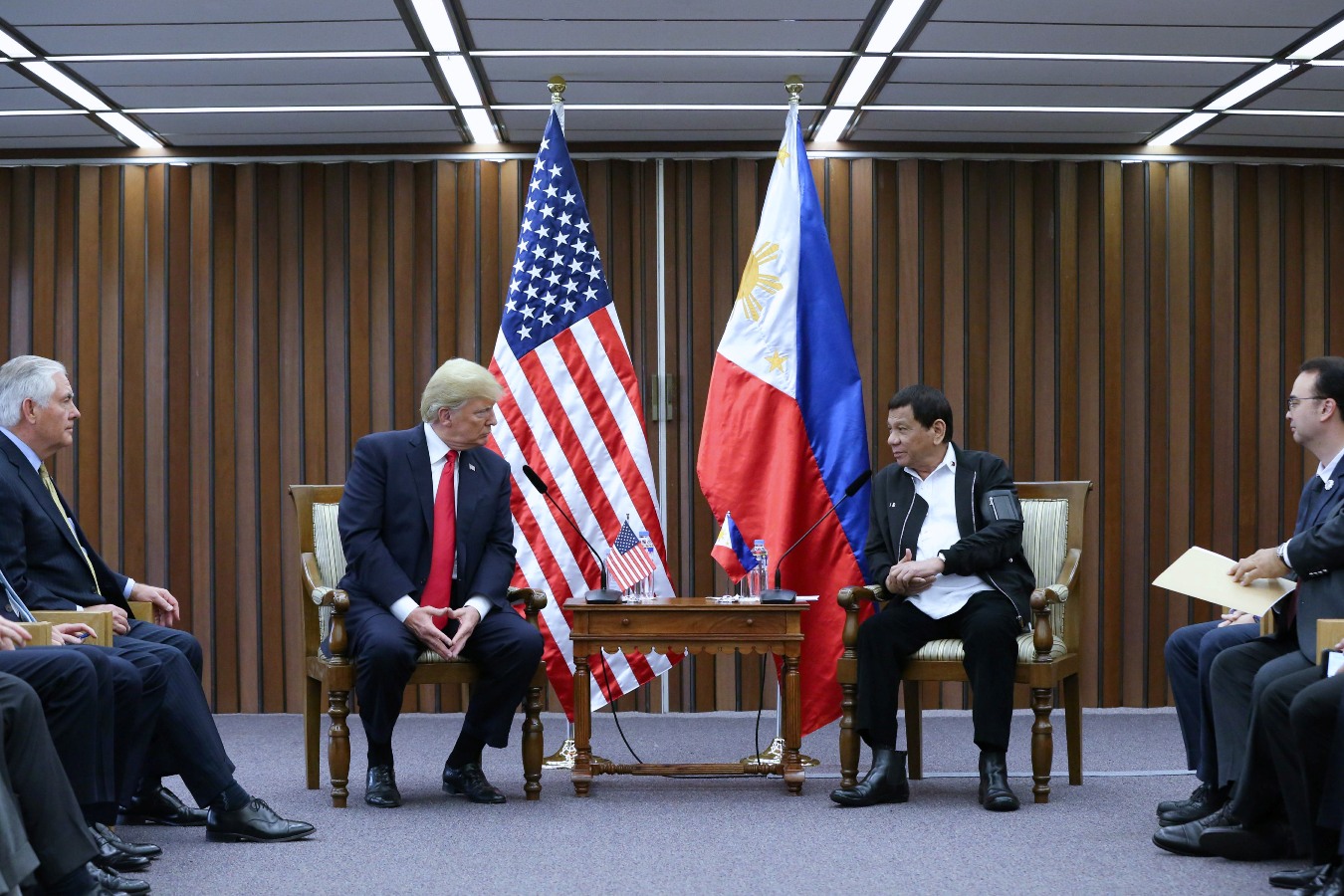 During the 50th anniversary of the Association of Southeast Asian Nations (ASEAN) and the 40th anniversary of United States relations with ASEAN, the United States and the Philippines commended ASEAN for its important role in promoting regional peace, stability, and socio-economic development. They pledged to continue to work within the ASEAN framework to pursue these goals throughout the Asia-Pacific. President Trump applauded the Philippines for its leadership as ASEAN chair during the past year.

The two sides underscored that human rights and the dignity of human life are essential, and agreed to continue mainstreaming the human rights agenda in their national programs to promote the welfare of all sectors, including the most vulnerable groups.

Both leaders condemned the unlawful nuclear weapons and missile development by the Democratic People’s Republic of Korea (DPRK) and called on the DPRK to immediately comply with U.N. Security Council Resolutions and agree to complete verifiable and irreversible denuclearization. President Trump commended the Philippines for its compliance with the relevant U.N. Security Council resolutions on the DPRK. The leaders also urged all countries, including those in ASEAN, to voice their opposition to these threatening programs and to take steps to downgrade their diplomatic and economic engagement with North Korea.

President Trump expressed his condolences for the tragic loss of life in Marawi City at the hands of ISIS-affiliated terrorists, and congratulated the Armed Forces of the Philippines for its success in liberating Marawi. He vowed that the United States would continue its support and assistance for the fight against terrorism and the rehabilitation of Marawi. Both sides committed to enhance their counterterrorism cooperation through conducting additional exercises, increasing information sharing, and addressing the drivers of conflict and extremism. Both sides discussed the rehabilitation and reconstruction needs of Marawi and pledged to continue discussions for the rebuilding of Marawi.

The two sides reaffirmed their commitment to the Mutual Defense Treaty of 1951, as reinforced by the Enhanced Defense Cooperation Agreement. The two sides discussed proposals to support the United States’ efforts to help modernize the Armed Forces of the Philippines, develop capacity and capability for maritime security and domain awareness, and provide rapid humanitarian assistance. They also reaffirmed their commitment to continue defense cooperation, including by reinforcing respective national defense capabilities and interoperability and enhancing joint activities, disaster response, and cybersecurity.

Both sides reiterated their commitment to uphold their principles including the freedom of navigation and overflight, and the exercise of self-restraint. They stressed the importance of peacefully resolving disputes in the South China Sea, in accordance with international law, as reflected in the Law of the Sea Convention. They further underscored the need to continue pursuing confidence-building measures to increase mutual trust and confidence, and to refrain from actions that would escalate tensions, including militarization.

They discussed the ongoing humanitarian and security crisis in Rakhine State, Myanmar. Both leaders called for the expeditious delivery of humanitarian assistance to affected communities, and welcomed the Myanmar government’s commitment to end the violence, restore media access, ensure the safe return of displaced persons, and implement all of the recommendations of the Advisory Commission on Rakhine State, and urged all parties to support these government commitments. They expressed their support for ASEAN’s role in working with the government of Myanmar to provide humanitarian assistance.

The two sides decided to further deepen the extensive United States-Philippine economic relationship. They discussed ways to expand on their mutual commitment to free, fair, and balanced trade that increases economic opportunity for all. The two leaders pledged to nurture economic ties, including private sector cooperation, to create jobs and opportunities for people in both countries. To this end, both sides will explore strengthening dialogues for innovation and sharing of best practices in technology to optimize the position of the Philippines as a preferred destination for American investments in the Asia-Pacific region.

The two countries recognized the importance of regular discussions under the United States-Philippines Trade and Investment Framework Agreement (TIFA) to strengthen the trade relationship, including by continuing to make progress in the areas of market access related to agricultural products, intellectual property, customs and labor, among others. The United States welcomed the Philippines’ interest in a bilateral free trade agreement and both sides agreed to discuss the matter further through the United States– Philippines TIFA.

The two sides discussed the ongoing campaign in the Philippines against criminality including illegal drugs. Both sides acknowledged that illegal drug use is a problem afflicting both countries and committed to share best practices in the areas of prevention; enforcement, including capacity-building and transparency in investigations; and rehabilitation.

Both leaders stressed the strong people-to-people connections between the Philippines and the United States. They acknowledged the many long-standing institutions that connect people of the two countries, including the longest continuing Fulbright program in the world—a program that has sent more than 3,000 Filipino scholars to the United States and nearly 1,000 American scholars to the Philippines—and the dynamic Young Southeast Asian Leaders Initiative that held its annual summit in Manila recently, in October.

Both leaders recognized the two countries’ successful cooperation in promoting inclusive development, fueled by good governance, partnerships with the private sector and civil society, and investments in health, education, infrastructure, agribusiness, technology, and democratic institutions. The two sides committed themselves to institutionalizing development capacity, which is the foundation of sustainable stability, growth, and prosperity.

President Trump and President Duterte pledged to continue cooperating to promote the mutual goals of peace, stability, and prosperity in the Asia-Pacific region and around the world.