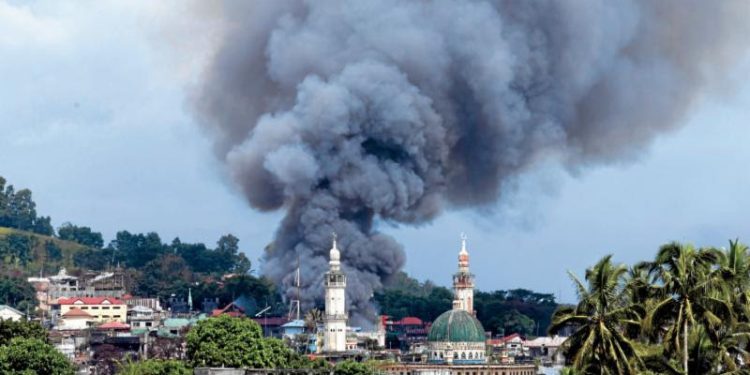 In this June 28, 2017 file photo, a bomb dropped by a military plane explodes as government troops press their assault on Maute terrorists in Marawi City. (Photo by Jeoffrey Maitem/Caption by Inquirer)
FacebookTwitterLinkedinMix

Government forces continue their drive against remaining pockets of Maute-led terrorist groups holding out in Marawi City. Concern for hostages held by the militants has dictated a measured response by the AFP. According to a July 3 statement by the Joint Task Force Marawi, government troops gained control of Dansalan College, which had been a militant stronghold since the fighting began on May 23, and seized a number of high-powered weapons.

After more than 40 days of fighting in Marawi, the death toll has exceeded 450, including 337 militants, 85 government troops, and 44 civilians.

On June 28, President Rodrigo Duterte authorized creation of an inter-agency task force for the reconstruction and rehabilitation of Marawi City to be headed by Defense Secretary Delfin Lorenzana. The U.S. government has offered to help with rehabilitation and recovery efforts. American Ambassador Sung Kim, in a meeting with President Duterte on July 3, also affirmed the U.S. government’s strong support to counter terrorist violence.

Many of the displaced are staying with relatives in outlying towns; others are sheltering in crowded evacuation centers. In interviews, evacuees expressed concern about returning to Marawi after the fighting ends, the challenges of rebuilding homes, restoring livelihoods, and the possibility of clan-based tensions (rido) leading to further violence.

The US-Philippines Society is partnering with the Philippine Disaster Resilience Foundation (PDRF) to provide relief and recovery assistance. Society Co-chair Manuel V. Pangilinan has authorized seed money in support of a mission by a Makati Medical Center team to treat injuries among civilians and soldiers and undertake public health initiatives to prevent the outbreak of disease.

The US-Philippines Society, a Washington-based nonprofit, welcomes tax-deductible charitable donations to meet urgent humanitarian needs during this time of crisis in Marawi.