Prospects for the Bangsamoro: Halal Industry 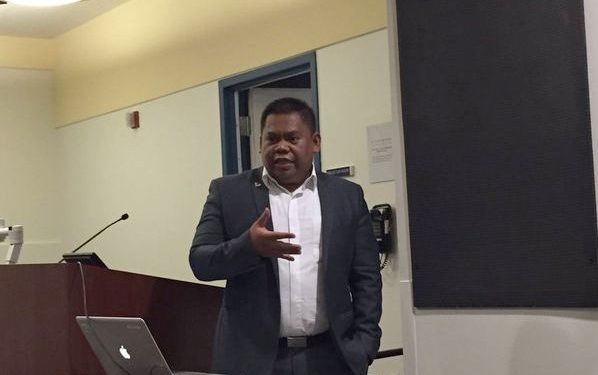 Aleem Guiapial at the Bangsamoro Forum. Photo credit: Embassy of the Philippines
FacebookTwitterLinkedinMix

WASHINGTON, D.C. – On April 21, Honorary Aleem Siddiqui Matabalao Guiapal presented a talk on  the Philippines-ASEAN-U.S. initiative in developing the Halal industry in Bangsamoro.

He examined the political and economic prospects for the Bangsamoro focusing on the promotion of the Halal industry in the Philippines with other ASEAN member countries and the U.S. as trading partners. With close to 2 billion Muslims and with Halal products increasingly used by the general consuming public all over the world, the Halal market presents an unprecedented opportunity for expanding economic ties between the Philippines, its ASEAN partners and the U.S., and thus to become a critical element in the peace building initiatives of the Bangsamoro in the Philippines.

Scholar-in-Residence affiliated with the ASEAN Studies Initiative at the School of International Service, American University. He is the Bureau Director of the Muslim Economic Affairs of the National Commission on Muslim Filipinos, Office of the President, Republic of the Philippines. In 2012 he was recognized as one of the 500 Most Influential Muslims for fostering economic development. He received the 2013 Contribution to Society Asia HRD award for spearheading education and learning initiatives. He is also credited for mapping various networking strategies that have brought inventors to the Autonomous Region in Muslim Mindanao. In addition, Mr. Aleem has played a key role in strengthening the Philippine government’s economic policy towards Islamic financing and Halal industry development. He holds a Master’s degree in Development Management from the Asian Institute of Management, a BA (Law) from Manuel L. Quezon University, a BA (Political Science) from Mindanao State University – Iligan Institute of Technology, and an International Certificate in Islamic Microfinance from Al Huda Center of Islamic Banking and Economics in Dubai

The event took place at the American University (AU) and was co-hosted by the US-Philippines Society and AU’s ASEAN Studies Initiative.