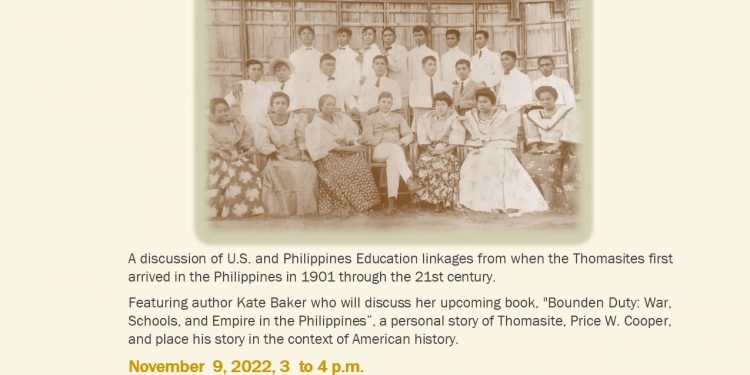 U.S.-Philippines Educational Linkages and the Legacy of the Thomasites

A delegation of some 540 American teachers representing major educational institutions including Harvard, Yale, Cornell and Georgetown universities, boarded the U.S. Army Transport “Thomas” at the San Francisco Pier and headed for the Philippines in July 1901. At the request of the US government, they volunteered to teach Filipino children and train Filipino teachers with English as the medium of instruction. Soon after, in 1902, more American teachers arrived comprising nearly 2,000 educators in the Philippines. They built elementary schools and founded higher learning institutions transforming the country into Southeast Asia’s largest English-speaking population.

Author Kate Baker will discuss her upcoming book, “Bounden Duty: War, Schools, and Empire in the Philippines”, a personal story of Thomasite, Price W. Cooper, and place his story in the context of American history. The program will review U.S.-Philippines educational linkages, focusing on the Thomasite legacy and noting the 21st century arrival of Filipino teachers filling shortages of educators in schools across the United States. The discussion will offer a socio-economic perspective on aspects of immigration policies and immigrant integration in host countries as well as the historical background of war and nation-building in the early period of Philippines-U.S. relations.

This event is co-sponsored by US-Philippines Society and Georgetown University’s Asian Studies Program, Global Development Program and the Institute for the Study of International Migration, a part of the Walsh School of Foreign Service.

Innovations in the Fight Against Corruption