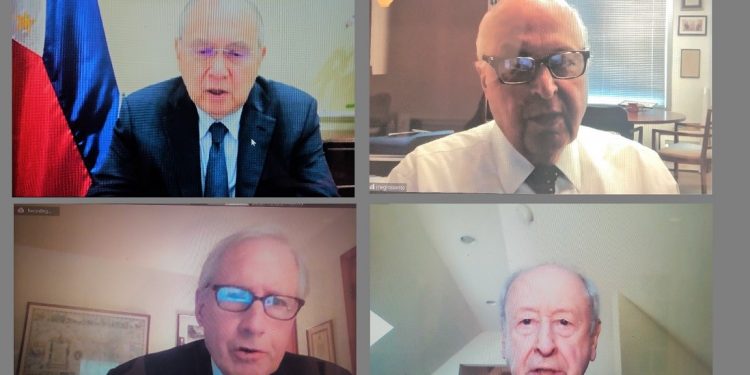 WASHINGTON DC – Reappointed by President Ferdinand Marcos Jr as chief envoy to the United States, His Excellency Jose Manuel G. Romualdez was the featured speaker at the September 7 online Southeast Asia Forum co-hosted by the US-Philippines Society and Stimson Center. US-Philippines Society Executive Director Hank Hendrickson congratulated Ambassador Romualdez and acknowledged his unique perspective on the Marcos administration. The Ambassador is second cousin to the President and as reporter has covered then Ilocos Vice Governor Marcos Jr.

Ambassador Romualdez provided insights into President Bongbong Marcos’ priorities as he had earlier laid out in his state of the nation address. On domestic issues, he observed that,

“The president clearly stated his administration priority, uplifting the lives of every Filipino. His near-term objectives include addressing rising inflation and achieving food security.”

“President Marcos strongly believes that strengthening the Philippines agriculture sector will be a key to ensuring food sufficiency for the Philippines not only in the immediate future, but in the long term. Therefore, he decided to take on the lead role in his effort by taking over the helm of the Agriculture Department.”

“We are also fully cognizant that for the continuity of sound policies which has attracted investments to our country will be crucial, and I wish to assure you not only will they continue, but better ones are forthcoming.”

Ambassador Romualdez emphasized that President Marcos is determined to pursue a truly independent foreign policy as the country recovers from the pandemic and remains committed to thrive amidst shifting geopolitical dynamics keeping in mind how policies greatly impact Filipino lives.

“Without a doubt, the United States will continue to be our key ally and partner, but we must expand our relationship beyond this decades old security alliance and make our partnership even more relevant to our people,” the Ambassador added.

A top priority at these bilateral meetings are vast and untapped opportunities for deeper economic cooperation not only within the context of the Indo-Pacific Economic Framework of which the Philippines is a founding member but also existing multilateral spheres of engagement – the East Asia Summit, APEC and the ASEAN – in the areas of digital economy, agriculture, sustainable infrastructure, climate, energy, supply chains and standards-based business processes.

Following the passage of key legislative and economic reforms, the Philippines is opening to regional partners, the European Union and other global partners. The country posted strong 2022 economic growth averaging at 5% – 5 ½% amidst the war on Ukraine and the pandemic. Strategically located, the Philippines is an ideal gateway to Asia where economic prospects are most promising.

To address evolving global challenges and bringing peace in the Asia region, the Philippines seeks to strengthen ties with partners and pursue more collaborative efforts.

Later this month, President Marcos will address the United Nations General Assembly, meet with world leaders and various business communities in New York. Ambassador Romualdez offered a preview of the President’s speech which will focus on three major issues.

“The President would like to be able to bring out into the world that he wants the Philippines to play a role in promoting peace and security, especially in our region.”

Current world affairs and challenges like “prosperity and the pandemic clearly tell us that we lack some kind of an agenda for everyone to understand that it affects everybody. The President sees an opportunity to be able to just tell the world that we need to really work together. Climate change is another one. So, all of these issues are going to be more or less discussed or elucidated by the President in his speech.”

In his closing remarks, Hank Hendrickson elaborated on the “important role of USAID and continuing its longstanding relationship with the Philippines and how that can expand, particularly to address some of the concerns that the Ambassador flagged and of the new president’s in the agricultural sector.”

We thank our participants and look forward to the next Southeast Asia forum with a year-end review of the U.S. and Philippines relationship.